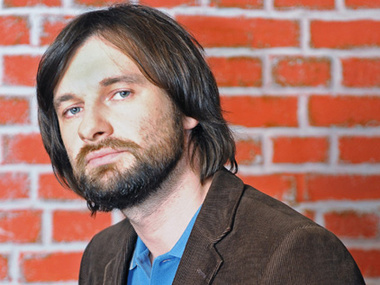 Loshak: Gullible and ignorant in civil matters people do not understand the value of freedom. They don't believe in them
Photo: liveinternet.ru

Russian TV shows viewers the news of Donbass, but they don't show how lives Russia itself. To understand the existence of the modern Russian, Moscow journalist Andrey Loshak made the trip from St. Petersburg to Moscow and shot the movie. In an interview with "GORDON" Loshak spoke about his project, about how Russian province lives and why Russians care about events in Ukraine.

Russian journalist Andrey Loshak and the crew of "Dozhd" TV channel tried to understand what is happening in Russia today. Reporters made a 12-day trip from St. Petersburg to the capital. They chose Alexander Radishchev's guidebook "Journey from St. Petersburg to Moscow", which was written in the late XVIII century.

Life along the federal highway connecting the two richest cities in Russia, over the past 200 years, essentially has not changed, though, it become more modern. There is cow parsnip growing in the fields, ruins are everywhere, abandoned factories, neglected farms, people can barely make ends meet. Life is hard, but the inhabitants of the provinces trust television and propaganda and are grateful to Putin for an allowance to the minimum wage of one thousand rubles (about $ 15), deny the value of civil liberties and do not want to change anything.

All travel notes Loshak gathered in the six-part documentary movie "Journey from St. Petersburg to Moscow. Special Way", which premiered on the Russian "Dozhd" TV channel on New Year's Eve.

- Andrey, why did you decide to go on the pass of Radishchev from St. Petersburg to Moscow?

- The spirit of the work and my current sense of self are largely coincided.

Radishchev was a man of liberal, had critical views of what is happening in the empire. Exactly at that moment, there was an active expansion to the south and west - the and other lands were annexed. There was an incredible upsurge of patriotism among the nobility, but the people stayed in the slave state. On the eve of publication of the book "Journey from to " The French Revolution started. The reaction of the imperial power in the taking of the Bastille can be compared with the current response to the Maidan, which took place in .

Here much coincided: the Radishchev's views and conventional audience of "Dozhd", that chooses not the third, not special, but the European way of development, the Maidan and the accession of the Crimea, patriotic enthusiasm and the search for domestic enemies in . There are too many coincidences for such a great length of time, which means that we are constantly going in circles and stepping on the same rake.

The main motivation for me was the fact that has disappeared from Russian TV channels. TV shows news of Donbass, talk about the terrible life in . At the same time, it is unclear how itself lives. I had a desire to see the country in which I live, people - who they are and how they live. At this point, we left and started to compare. For example, in Torzhok Radischev reflects on censorship, so we went to a local newspaper.

- Has the situation with freedom of speech for 200 years in Russia changed?

- There is no need in censorship! Editor in chief of the city newspaper said that they should have 70% of the good news. Where did she get this norm? She does not know. Perhaps somebody said that at City Hall, or maybe it was her initiative. Chief Editor explained me: I was milking cows with my own hands, was plowing the land, from the 60s was working in the newspaper and has earned this chair, God forbid you to hold so long in "Dozhd". That means that she is for the sake of this place is ready to change beliefs.

The ancient city is falling apart. 1200 historic buildings, only 10 of them were restored. In the "first aid" there are no doctors and drivers. There is only ne brigade for the entire area. There are illion problems, but they have always good news. 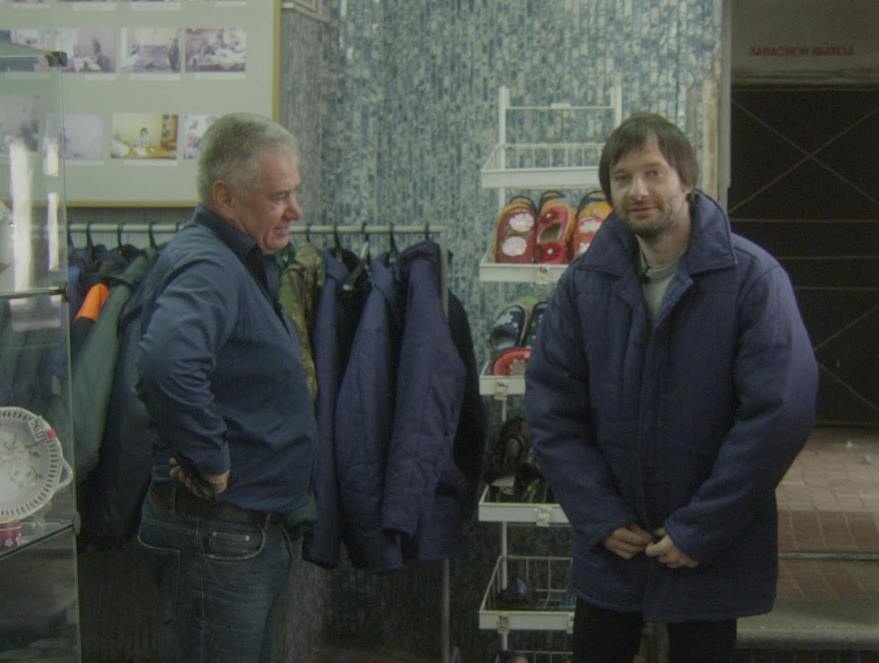 In the city of felt "a sharp impact of the space on the person" and bought a jacket at the local factory. Photo: Andrey Loshak / Facebook

- There is a moment where your companion says: I thought you were normal, but you work for "Dozhd". There were a lot of negative moments in dealing with people?

- When I worked at NTV, there was another problem. We were perceived as a source of scandal, and then it was a whole new feeling for me – I clearly felt the result of propaganda. When I said that I represented "Dozhd" TV channel, people looked at me sharply ... I think, in 1930s the Soviet people looked at the same way at foreigners – with suspicious. There was a farmer who refused to talk. There were also ractions like: we do not trust you, but we'll talk. However no one was watching "Dozhd".

Locals support all the stereotypes of propaganda. But when the war in came to them in the form of refugees they began to resent

- In different cities and towns you questioned people about their lives. They somehow moved the discussion of personal problems to the subject of Ukraine and the Orange Revolution. Why are they so interested in the neighboring country? Why the interest is even stronger then the interest to their own life?

- In fact, many Russians do not understand what is happening in . As long it doesn't concern them personally, they support television stereotypes. The same was the situation with Ukrainian refugees. If they hadn't not come to the region and settled in a neighboring yard, the locals still would have said that there is Bandera in and Ukrainians must be saved. But when this phenomenon appeared in their living space, people started thinking. 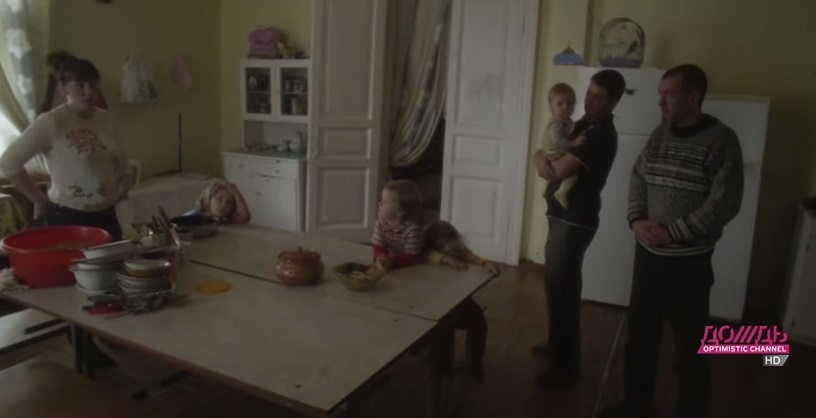 Refugees from Donbass get help 800 rubles (about $ 12) a day and have a preference in employment. Photo: Video screenshot

Mother of many children told us that she is paid 1 thousand rubles a month for her five children - about $ 3 per child. Clearly, she feels irritated when the newcomers of immediately receive preferential treatment; the state spends on each refugee 800 rubles.

Locals support all the stereotypes of propaganda. But when the war in came to them in the form of refugees they began to resent. They can not understand why they live so bad in their native land and no one helps them, but visitors receive such a huge help. It's offensive.

- The feeling of resentment causes aggression, people are angry?

- There are quite a lot of sane people. The stronger the people abandoned, the farther the village is from the federal highway, the greater the understanding of life. The propaganda doesn't harm them. These people are left to themselves, they could affect the situation, and they do not want to. They survive in extreme conditions and do not have any illusions. I talked to people to understand what they have in their heads. Why a woman loves Putin, though is standing near the destroyed fence, drinking water from contaminated wells, lives with stove heating, although there is the Gazprom pipe to a mile from the house. Nevertheless, she says that Putin raised from its knees.

- So far, for 200 years the Russian people did not become free, they still need a strong hand that will show them the right path?

- I do not want to say that people are mindless sheeple, but most of them do not have a culture of perception. We go through an endless circle, when the state subdues people to its interests, and the government freeloads.

Formally, people are free. They do not have a host, like slaves. But it is a bad freedom, in the sense that they are not wanted, left to themselves, as stray dogs. 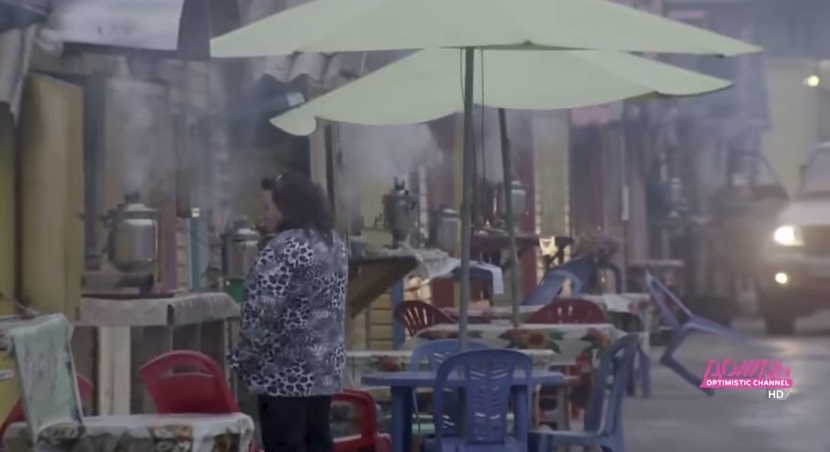 Illegal sale of pies on the road is the only way to make money for villagers of Krestsy. Photo: Video screenchot

1990 for them is a complete hell. During that time the villages, small towns, the industry were completely smashed. Everything turned into a huge cemetery, abandoned farms, buildings and dead plants are everywhere. People were shocked by the democracy that was in in 1990 and quickly turned into chaos. They do not accept any values of democracy. For them, it's just the pain, the horror, tragedy, disaster, loss of human appearance, sheer humiliation.

I've been to many places in and have not seen a thriving village. Decay and despair is everywhere

- The region you were driving through is located between two of the richest cities in the country. Why are people so poor there and live in such horrible conditions?

- I had a discussion with journalist of "Pervyi" TV Channel. He believes that the capitals like powerful funnel suck all the life out of these areas. I've been to many places in and have not seen a thriving village. Decay and despair is everywhere. I had an absolute feeling that this country is dying. 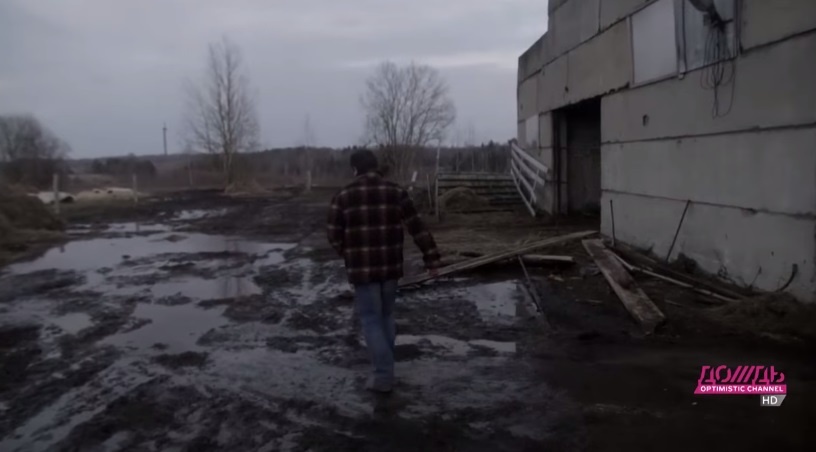 A working farm in the Tver region. Photo: Video screenshot

In the Soviet era at least the idea was defuned, but now it is not clear why we should stand it. o that Putin and his friends could feel comfortable in the Kremlin? ..

Enterprising people were first to realize it. They want to follow the path of progress. The record outflow of capital from is clear evidence of this.

Our authorities violated the tacit agreement, which was concluded with the advent of Putin: I'm taking out liberties, but I give you the opportunity to earn, we will quietly do our job, but you will get something, loans, for example. It was clear rule for the people. Due to the underdevelopment of civil consciousness, people went for it. Russians have sold the freedom.

Oil rents gave and give the possibility of the existence of such a hopeless, but wildly ambitious state with imperial complexes

I think it will be a very tough year. The entire economy lived on Western loans. Now there is the regime of sanctions. The financial system will be crashed, then - the industry one that took loans from banks, and then – the people who are impoverished and unable to pay the loans. And you should thank only one person.

Putin's power is absolutely uncontrollable. He lost his mind.

The conflict in the Donbass is a logical continuation of the annexation of the . Our whole terrible history is the result of voluntarism of one person who because of permissiveness lost control. He freaked, and we are now paying the price. 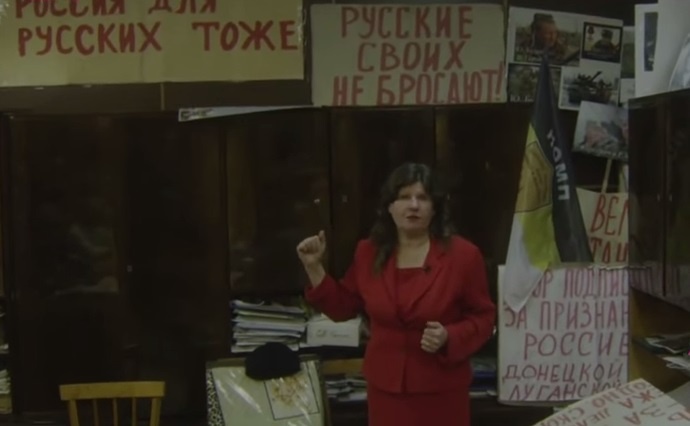 At the headquarters of the supporters of imperialism in . Photo: Video screenshot

- Radischev in his book predicted the revolution. You went on his route, talked to people, saw their lives with your own eyes. Do you think there is a possibility for Russians revolution, or at least a drastic change?

- If oil goes up, this regime will continue its existence. Oil rents gave and give the possibility of the existence of such a hopeless, but wildly ambitious state with imperial complexes.

If low oil prices remain for more than a year, we can get a serious shock. People will wake up, because there will be simply nothing to eat, when the state ceases to perform its obligations.

There is an opinion of the Russian people that we can suffer for a long time, but our indignation is terrible. Russians revolt, senselessly and mercilessly. Personally, I believe that the Russian revolt can be quite meaningful, and not bloodthirsty. It is obvious that the current regime is incapable for dialogue, and therefore, we cannot hope for the peaceful evolution of government.