Vera Savchenko: Europe must demand Nadezhda’s release. If the USA deals with it, Russia will resist more 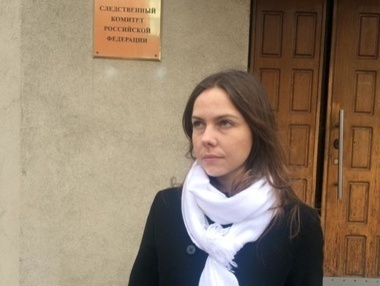 Savchenko's sister urged not to be afraid of going to mass actions
Photo: Alex Ryabchyn / Facebook

The Ukrainian pilot and people’s deputy Nadezhda Savchenko’s sister Vera believes that the Russian authorities must see the public reaction to the situation with the woman pilot and urged the Russians not to be afraid of going to mass actions.

Europe must demand from Russia to release the Ukrainian and people’s deputy Nadezhda Savchenko because the Kremlin will resist more to the pressure from the USA. The pilot’s sister Vera Savchenko said it in the comment to the GORDON .

"We must demand from the Kremlin to release Nadezhda, and we must demand from Europe to take actions. We cannot demand actions from the USA because the more the USA will press upon Russia the more Russia will resist. We can act through Europe," she considers.

According to her, the Russian authorities must see the reaction of the public opinion.

"Letter should often be written to the pre-trial detention facility where Nadezhda is detained. Many letters. Russian authorities must see the reaction of the public opinion. People make their ratings, and rating gives power, and power gives money. It is very important to shape the public opinion. We must shape it to prevent them from shaping it for us. It is only then that the shepherd will follow sheep. We and only we must head this movement if not stop this flock of sheep," Vera Savchenko emphasized.

Savchenko’s sister urged not to be afraid of going to mass actions.

"One should go to mass actions and not be afraid. Another such action will be on March 1, and, hopefully, it will be a mass one. I understand that everybody is arrested, but people must make a choice – either they go on living under dictatorship, or they finally hold up their head," she noted.