Fesenko: The Novorossiya project is not wound up. "LNR" and "DNR" will remain a springboard for destabilization of the whole Ukraine 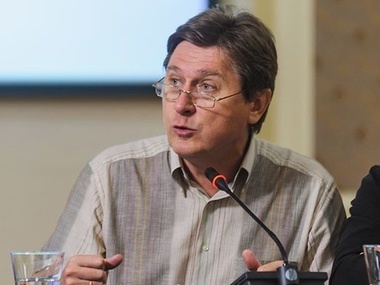 ‘Vladimir Putin already "withdrew" the troops from the Ukrainian border, and then there was a tragedy in Ilovaysk. Therefore, the Kremlin did not give up the Novorossiya project,’ considers the political analyst Vladimir Fesenko.

On October 11 the President of Russia Vladimir Putin ordered the Ministry of Defense of the Russian Federation to transfer military personnel who were involved in drills in the territory of the Southern military district (in Rostov region, near the Ukrainian border) back to their permanent dislocation. According to the Russian oppositional politician Boris Nemtsov, it means the actual conclusion of Putin’s Novorossiya project.

The Ukrainian political analyst, Director of the Center of Applied Political Research "Penta" Vladimir Fesenko does not agree with Nemtsov. According to the expert, the Novorossiya project is not wound up; it is only frozen before the approaching Europe-Asia summit (October 16-17 in Milan) where negotiations between the President of Ukraine Petro Poroshenko and Vladimir Putin will be held.

‘The Novorossiya project is certainly not concluded. Since the beginning of summer 2014 that people in Ukraine kept shouting, ‘Letting down Donbass’, while people in Russia kept shouting, ‘Letting down Novorossiya’. The truth is actually in the middle: nobody surrenders anything. Putin withdrew troops making a certain gesture of "good will" before the forthcoming negotiations in Milan,’ said Fesenko for the GORDON edition.

The expert notes that the mass media repeatedly reported information on new arms supplies to Donbass from the territory of the Russian Federation during the last week.

‘This week, there have been many messages that many fighters came to the territory of Ukraine from across the Russian border. Probably, these are new forces that completed training and retraining: someone received medical treatment, someone was replaced. In generally, they sent weapons and people and formally announced the drills finished. I am convinced that it is not the last Russian drills on the Ukrainian border, Putin will begin new ones if deems it right,’ Fesenko declared.

The political analyst reminds that the last time that there was information about the completion of the Russian drills, there was a tragedy near Ilovaysk: the Ukrainian battalions found themselves encircled and were almost completely defeated.

‘After the summer statements that Russia is allegedly surrendering "LNR" and "DNR" and that the drills were over, there was the Ilovaysk tragedy in Ukraine – active armed forces of the Russian Federation actually invaded our country. So you should not make hasty conclusions about winding up of the Novorossiya project. Russia has repeatedly organized drills near the Ukrainian border and it will carry on doing this,’ Fesenko believes.