Foreign mass media about the Minsk agreements: Putin smiled not for nothing, the favorable role of Lukashenko, Poroshenko is going to fight in the Parliament 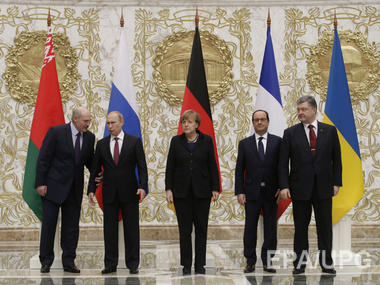 The members ofnegotiations of Normand format in Minsk
Photo: EPA

Foreign mass media with a great interest watched the course of the Minsk negotiations. Whether there will come the peace in Ukraine and for how long it will last? What negotiations ended with? Who and what won as a result of the reached agreements?"Gordon" studied the materials of the foreign press devoted to the Minsk agreements.

Negotiations in Minsk appeared on the front pages of the world editions. The previous memorandum signed in Minsk was not carried out for not even a day and could not prevent bloodshed on Donbass. However this time the top officials of Ukraine and the Russian Federation took part in negotiations. Both the German chancellor Angela Merkel and the president of France François Hollande acted as guarantors of observance of the arrangement. Considering the previous history of non-compliance with arrangements, we don't have great expectations on new Minsk agreements. As The Wall Street Journal writes, despite 16-hour negotiations, many questions remained not resolved. However there is the reason for muted optimism.

The Euronews edition characterizes meeting results in Minsk as "shy hope for the peace" in Ukraine. The European politicians very carefully pass an opinion on results of negotiations.

The German specialist in Russia, professor Hans-Henning Schröder analyzed final Minsk arrangements. Schröder said in interview to the “German Wave” that in case of implementation of arrangements Ukraine has a prospect of restoration of the political power on Donbass, and Russia will be able to normalize the relations with the West.

"It is not known, whether all this plan will be realized. Let's begin with such simple things as demarcation of a front line by observers of OSCE. They should define on a place, whether it corresponds to the card, and to demand to take away from it heavy arms. Whether there will be able to pass the international observers through all villages in the seized territory and to take care of that the Cossacks who sat down at them returned to Russia? I am not sure", – Schröder noted.

The editor-in-chief of the Russian edition of DW Ingo Manntoyfel also declared that details of the new agreement raise big doubts, and probability that fights will be resumed is very high. The edition The Washington Post notes that any plan allowing to suppress the 10-month conflict on Donbass will demand support of the Kremlin. And the expert of the center of Carnegie Eugene Rumer pays attention that the president of Ukraine Petro Poroshenko still should carry out somehow possible changes to the Constitution through the Parliament. "It will be a subject of huge and very fierce debate in Kiev", – emphasized Rumer, Associated Press reports.

The La Times reporter Sergey Loyko reports that the agreement in Minsk was signed under pressure of the accruing campaign among the American foreign policy officials supporting sending the weapon to Ukraine. The New York Times notes that in spite of the fact that the parties approved a ceasefire regime, the pro-Russian insurgents continue counterattacks near the Bloomberg agency called the point of the Minsk agreements "the cynical act" according to which ceasefire is postponed till Saturday's midnight. It will lead with guarantee to heavy fighting and gives to fighters the chance to take an important railway junction, the city of Debaltsevo, notes the American agency. In general the Bloomberg notes that the Minsk agreement has huge shortcomings, therefore not without the reason the Russian President Vladimir Putin left from negotiations with a smile.

American reporters consider that Putin was smiling not without the reason. Photo: ЕРА

The Polish “Gazeta Wyborcza” notes that benefit from negotiations in Minsk was received also by "the Belarusian dictator" Alexander Lukashenko who will try to use the negotiations which took place in Minsk to improve the relations with the West.

"In May in Riga will pass the next summit of "East partnership" – the program of the EU in relation to Armenia, Azerbaijan, Georgia, Moldova, Ukraine and Belarus. Because of sanctions the president of Republic of Belarus, unlike leaders of other countries, never could participate before personally in these summits, but now Minsk insists on that Lukashenko was officially invited", – writes the Polish edition.

The Russian mass media mainly continue to adhere to the official version that in Ukraine which the internal conflict continues for monthes. As "the Russian newspaper" writes, negotiations in a Norman format in Minsk allowed Ukraine to finish civil war.

Thus the edition transfers words of the head of the Federation Council International Affairs Committee Konstantin Kosachev who is not confident in final success of negotiations in connection with the existence in Ukraine influential "party of the war" which is the "extremely interested" in conflict preservation.

And on pages of the Vedomosti newspaper professor Maxim Mironov notes that the situation in "Novorossiya" reminds the throttle control.

The site of REGNUM news agency quotes the director of the French-Russian analytical center "Observo" Arno Dubien who notes that there is no decision for the most problem point – the city of Debaltsevo of Donetsk region is not stated in new Minsk agreements.

"Before coming into effect of a truce (midnight on February 15) we should expected the heaviest fighting both in Debaltsevo, and in other places. If as a result of it there are 200-300 dead with any of the parties, it will break the begun process. And such development of a situation is unfortunately very probable",– Arno considers.

According to the French expert, the president of Ukraine Petro Poroshenko won more, as in the final document there is no mention of federalization of Ukraine, about its extra block status, but several times they talked about its territorial integrity. And the president of Russia Vladimir Putin opened for himself a way of normalization of the relations with the West that can positively be reflected in Russia's economy.

The Prime agency quotes the financial analyst Ivan Kopeykin who reports that after leading of some results of a meeting in "a Norman format" in Minsk the ruble significantly became stronger to dollar and euro.

The special correspondent of the Russian Kommersant edition Andrey Kolesnikov considers results of negotiations as a victory of all negotiators and participants of the Ukrainian conflict.

"For all there was, probably, simplification that after all the first document was signed by all members of contact group, because it means that they took the responsibility for its performance", – Kolesnikov reported.