Malomuzh: pro-Russian fighters will stand to the end. Globally, the situation can only be changed by a strong international factor 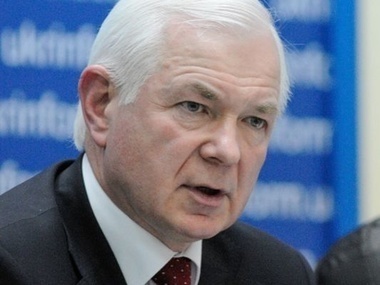 Malomuzh: Terrorists believe that they are winning and therefore set ultimatums
Photo: telegraf.com.ua

The threat of a full-scale war with Russia is unrealistic, says the former head of the Foreign Intelligence Service of Ukraine, General Nikolai Malomuzh.

We can demand the return to the previous Minsk demarcation line, but most likely it will not happen. Pro-Russian fighter seized the territories, and will stand to the end, the global situation can be changed only by a powerful international factor. This opinion was expressed in the comment to "Gordon" by former head of the Foreign Intelligence Service of Ukraine, General Nikolai Malomuzh.

"We can and must demand the return to the previous Minsk demarcation line, but I will say frankly that really it will not happen. They took these territories and will stand to the end. The global situation can be budged only by a powerful international factor. Geopolitically it is an implementation of Putin's plan to expand the area of influence to the borders of Donetsk and Lugansk regions. As a result, according to the Russian leader, it may be a great distrust of government in Kiev and in the whole country, and in the end, this may lead to its overthrow in favor of the pro-Russian forces, "- said the expert.

According to Malomuzh, Ukraine needs to pull itself up and go into the offensive, so that then we could sit down at the negotiating table.

"We shouldn't agree on any ultimatums in any case. Taking into account our increasing armed reserves we have to very toughly consolidate our position and to give a powerful resistance. In this situation, we can already dictate - the cease-fire to stop the victim. During the negotiating table but with leaders, including Zaharchenko and Plotnitsky, we must agree on a more systemic measures on differentiation. After cease fire, we must still insist on the Minsk Agreement, starting the Norman or even wider negotiation in the G-20 format. Moreover, the global threat from Russia and its course on the arms race should force the leaders of the G-20 to sit at the negotiating table ", - he said.

Malomuzh believes that Russia is not ready for full-scale war.

"The threat of a full-scale war with Russia is unreal. Current information indicates that Russia will not pursue such measures. The geopolitical situation says that now such operations are not being planned. There are no geostrategic prospects, nor direct reason for that. What is more the Russian society is not ready now for the perception of such a scenario. Already, more than 48 percent of Russians are against the real war between Russia and Ukraine. All these factors will greatly influence Putin, "- he said.

However, in his opinion, Russia will continue efforts to extend the military development in the east of Ukraine.

"Plans call for the extension of the zone of fighting insurgents with the support of Russia. The terrorists set ultimatums because they believe that they are winning. It is the captured airport, a number of settlements in different sectors, the militants in those areas have advanced on 5-7 km. One of the most important object now - is Debaltseve, which they believe is almost in their hands. However, our troops conduct countermeasures and not the fact that they will be able to take Debaltseve. But, nevertheless, the terrorists consider their Debaltseve as their strong argument. Therefore, they dictate format, participants and the agenda of the Minsk talks. In their opinion, the leadership of our country will have to reckon with their victories and will be forced to make concessions, both in the questions of the territory and cease-fire from our side, "- said Malomuzh.