The movie about Putin 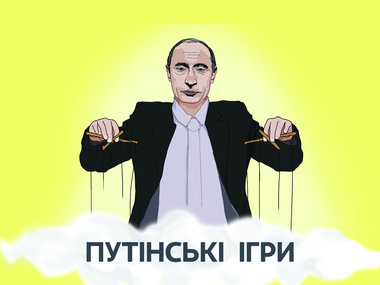 Fragment from the poster to the movie

Forbidden in Russia movie "Putin Games" was released in Ukraine. It is directed by the documentary film maker Alexander Gentelev who emigrated to Israel in 1993.

The movie was ready prior to the scandalous Winter Olympic Games-2014 in Sochi and tells about the city preparation for the event. Everything began after Vladimir Putin chose routes in Krasnaya Polyana (Red Meadow) – the resort town near Sochi. In total, he was 300 times there. In the movie it is shown how elegantly the Russian President slides on skis from slopes with kids. It is obvious that he is in an excellent physical form and he won't fulfill today's every Ukrainian's wish soon. At least, in natural way.

Putin in the movie (as well as in life) – an evil incarnate, but the mayor of Sochi Anatoly Pakhomov carries out a comic role. He is incredible cheapskate! He makes funny stupid things. For example, he says "The new mayor, I mean me", or – in front of camera – suggests helping old women to carry handbags, but they shockingly freak out. His interview where ha says that the city cares of each inhabitant of Sochi, changes with shootings of the last: houses of many residents of Sochi were demolished to construct roads, skating rinks and so on. Nobody offered them the new houses; people became homeless.

The movie reveals that manner in which Russia runs its business: the manner of bald lie and stealing everything it doesn't own. The director of base in "Krasnaya Polyana" who opened it 17 years ago and cherished all these years, says that to carry legal proceedings when the base was selected, was useless, and that sooner or later cops would throw him drugs or the weapon. He simply had to refuse his own business.

Except for local Sochi inhabitants, in "Putin games" it is possible to see Boris Nemtsov and Garry Kasparov. They of course abuse the Russian President. So, Nemtsov jeers that Vladimir Vladimirovich found the only place in all huge Russia where there is no snow in the subtropical resort, and decided to arrange the Winter Olympic Games there." It is obvious that it simply a monument which he builds himself", – Boris Nemtsov commented. He also did arithmetic calculations and reported that construction of the road from Adler (there is an airport) to Krasnaya Polyana 45 kilometers long cost $8 billion. In other words – if they really spent that money for the road, it could be covered with a five-millimetric layer of gold. Or black caviar. In general, Nemtsov estimates the budget of the Winter Olympic Games at Sochi in $50 billion. Thus, the cities which carried out Winter Games last years – Turin, Vancouver, etc. – met $2 billion budget. Looking at impudent muzzles of organizers of the Russian Olympic Games, there are no doubts that they plundered money not less impudently.

Except corruption, in "Putin games" it is lit perhaps, more serious problem – ecological one. The main objects of the Olympic Games were constructed on Imeretinsky lowlands – actually, on a bog. Iosif Stalin wanted to construct the airport there, but the geologists dissuaded him. Putin didn't give a crap on the nature. So it is unknown, how long will all these new constructions in stay Sochi.

In general, 56-year-old Alexander Gentelev did excellent journalistic work, and his movie was successful. Besides, it is interesting to watch "Putin games" now when all this grandiose swindle with Sochi looks like a warming-up before annexion of the Crimea and Donbass According to the movie it is obvious that the Olympic Games were initially started that the top of the Russian power could grab the warmest region of Russia.

The picture has also a certain therapeutic effect. It allows to laugh over hated H...lo and his colleagues. The most obvious after watching the movie: if so many people are dissatisfied with the mode in Russia, if this mode is obviously deprived of logic and, respectively, care, – sooner or later it will collapse. It is the law of evolution.