The uncle of the paratrooper of the Russian Federation Kozlov who lost his leg: the relatives of the dead are paid 5 million rubles, and wounded – 3 million therefore they keep silent 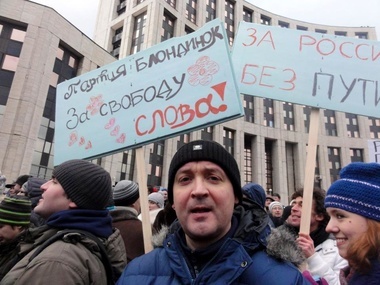 Sergey Kozlov: The wounded and the relatives of dead are paid, thats why they keep silence.
Photo: Sergey Kozlov / Facebook

The story of the Russian paratrooper Nikolay Kozlov who came back as the disabled person from the war on Donbass in August of the 2014 couldn't have been concealed thanks to the message left in Facebook by his uncle Sergey Kozlov. The journalist of the GORDON contacted him to learn what changed in Nikolay's destiny. But unexpectedly they started the conversation about Russia.

The Moscow programmer Sergey Kozlov communicated with the nephew Nikolay not frequently. Nikolay lives in far Chelyabinsk region. But at the end of August 2014 who became the first who came tearing along in chamber of the Central military and clinical hospital No. 3 of the Ministry of Defence of the Russian Federation where Nikolay lay after operation. Without leg.

Having learned about what happened to the nephew, on his page on Facebook Sergey wrote: "My brother called. He told that his son, my nephew, was brought to the Moscow hospital. He is now the disabled person without leg until the end of life. The Crimea is ours now". 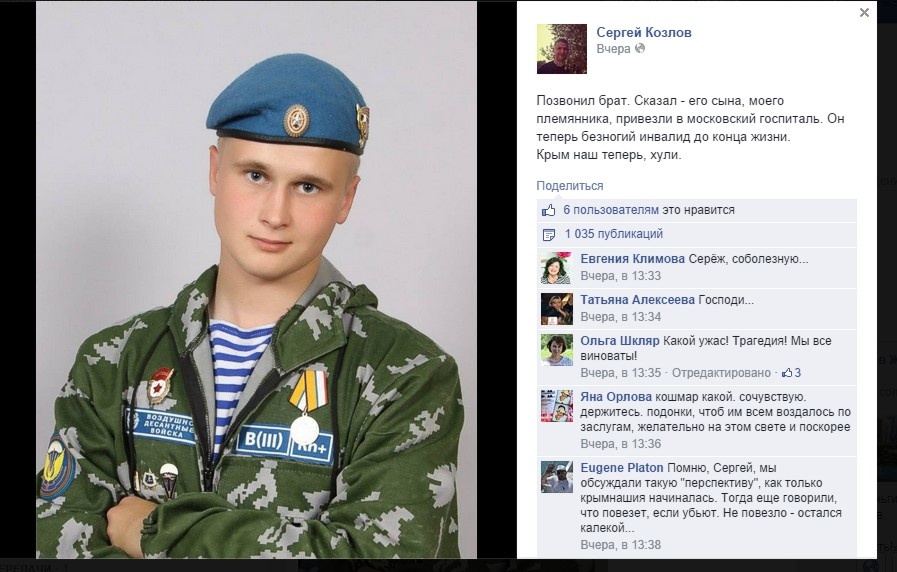 Thanks to the message on the Sergey Kozlov's Facebook page the story of Nikolay Kozlov couldn't have been concealed, unlike the stories of other Russian soldiers.

The 22-year-old Russian lance bombardier-contract employee of the 31st assault combat battalion quartered in Ulyanovsk, Nikolay Kozlov fought on Donbass during less than a month.

Only when behind a window of the bus in which he was together with colleagues, they saw a sign: "Rostov-na-Donu" he realised where they were sent to. But he did not tell neither parents, nor the pregnant wife Svetlana anything. Only warned that the long business trip is necessary. After he was ordered to write the holiday request they took away his phone. Since that moment Nikolay Kozlov not of own will became "volunteer" and went to fight to Donbass.

He managed to visit Ukraine already at the end of winter of the 2014 where in the uniform with the sign "Militsiya" embodied the fighter of “Berkut” division. 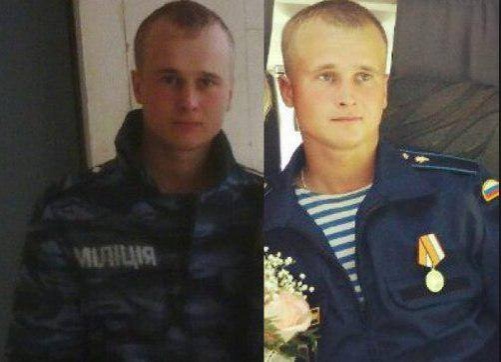 In the Crimea Nikolay Kozlov had to pretend the fighter of Ukrainian "Berkut" devision and to take part in seizure of the Supreme Council of the Crimea. Russian commanders rewarded him with medal "For Return of the Crimea". Photo: uglich-jj.livejournal.com

On February 27 together with other Russian "figurants", already in other image, seized the Supreme Council of the Crimea. The medal "For Return of the Crimea" which Nikolay with pride put on a single-breasted coat even in the wedding day on August 1, shortly before a trip to Donbass became an award for military diligence and obedience. 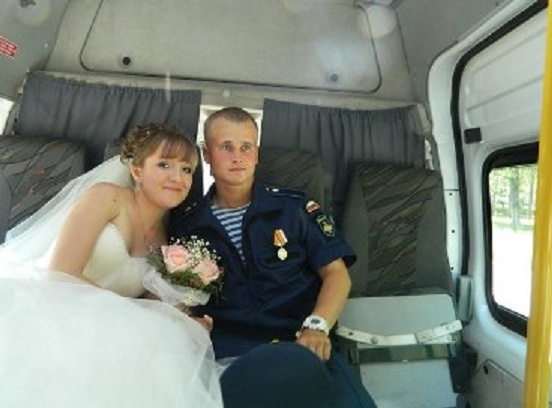 Nikolay and his wife Svetlana. The 1st August of 2014. He lost his leg less than in a month. Photo: uglich-jj.livejournal.com

Donbass … Perhaps once, looking through his photos, he will tell his grandsons the truth about at war he was and for what he fought. But to grandsons still far, and he practically does not communicate with the press. So we also did not succeed to ask Nikolay about anything. But in the fall, resting in bed in postoperative chamber, nevertheless he conceded to a pressure of journalists of NTV TV channel and told how he got under mortar attack and what he felt after realizing that he remained without leg.

"Maybe it is a destiny, – Nikolay said sadly. – I do not complain".

In that program on "NTV" he was presented as the hero. However, no one mentioned where Nikolay lost his leg and for the sake of what.

ВИДЕО
The TV program "Secret Materials" on the 1+1 channel told the story of two soldiers - the Russian and Ukrainian ones. One of them - Nikolay Kozlov. Video: 1+1 / Youtube

Journalists of "Moscow Ekho" contacted his father, the truck driver, Vsevolod Kozlov living in the city of Ozyorsk of Chelyabinsk region, hoping to hear damnations to war, but conversation turned absolutely differently.

"He fulfilled the duty, he was not afraid", – Vsevolod told: "I am proud of him".

Sergey Kozlov says that his brother, despite the tragedy in a family, didn't change his relation to the Russian-Ukrainian war. And he is still proud of valorous Russian army, that helps terrorists to kill civilians on Donbass and the Ukrainian soldiers and to destroy the cities, – actually, Sergey did not tell this. But the video records and attestations of eyewitnesses approves that

We persuaded Sergey Kozlov to give us an interview not only because he is the relative of the soldier who came back as the disabled person from unsolemn war. Being the person educated and thoughtful, Sergey well understands that his nephew, as well as thousands of other Russian military personnel who was lost or wounded in this war became a small screw of brutal state machinery.

However, once in our general history it was the same: "I raise a toast for simple people, usual, modest, for "small screws" who keep in a condition of activity our great mechanism", – Stalin on reception in honor of participants of Parade of the Victory in the 1945th told. While in the Kremlin the pathos toasts sounded, in GULAG and on the Solovki the "small screws" which dropped out of the mechanism supped a camp skilly.

Today in Russia behind pathos idea of "the Russian world", as well as in Hitlerite Germany, and in Stalin times, the same terrible lie is covered.

– Sergey, the Minister of Foreign Affairs of the Russian Federation Lavrov at a meeting of Foreign Ministers in Berlin in the presence of journalists of tens foreign editions declared recently that there are no Russian troops in Ukraine. So it means that Nikolay went to be at war to Ukraine as a volunteer?

– Is your nephew still in the hospital?

– No, he got a temporary artificial limb, and he came back home, to Ozyorsk. They are expecting a baby with his wife.

– How do you consider, he feels as the hero?

– You should ask him.

– We are ready. Will you help us to contact him?

– No, Kolya will not talk on this subject.

– Was he paid a compensation for the lost leg?

– Yes, he received 3 million rubles. The seriously wounded are paid such sum. He asked me what to do with money. I advised to convert a third of the sum to dollars, a third – in euro and to leave the last third in rubles. But I do not know what he will actually do with this money. It's his money, he earned it.

– Then the family would receive 5 million.

– What such sum would be enough for in Russia today?

– Well, if an average Moscow salary is 100 thousand rubles approximately, on this money it is possible to live 30 months.

– Yes. It is a big sum enough. In Moscow you will not be able to buy the apartment, but in Chelyabinsk region, for example, where Nikolay lives, – it is possible.

If the contract employee refuses to serve, he has to be ready for the problems

– Can the contract employee, having learned that they send him for war, submit the official report about dismissal?

– Theoretically – yes. But in this case he has to be ready for the problems, some repressions. And if he serves and gets paid, it is impossible to refuse already in any way. It is necessary to be at war. 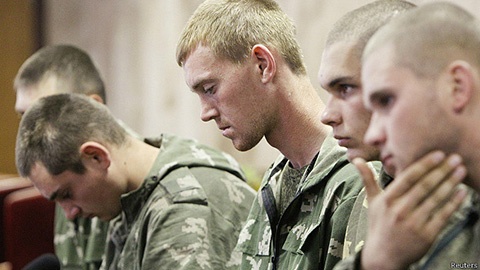 One of the Russian paratroopers detained on Donbass told the journalist of the American magazine Newsweek: "If I knew that I went to war, I would throw everything and at once would come back home. I have two small children and the wife there". Photo: newsweek.com

– Do you know anything about those guys who went to the war together with Nikolay? Has someone come back home?

– He did not tell. Only when he was in hospital in Moscow and asked to bring cognac he told: "Our guys were lost, it is necessary to commemorate."

– The Russian military personnel on Donbass perishes every day. Elena Vasilyeva, the human rights activist and the founder of Gruz-200 group in Facebook, gives figure – more than five thousand dead. Can parents of those who are still alivemake, in your opinion, any changes? To address to Putin with the requirement to stop using their sons in criminal war?

– Russians do not know about these figures. Relatives of the dead and wounded are paid, therefore they also are silent.

– Of course, after all these figures are not called in Solovyov and Kiselyov's programs, in a news. If there “no” war in Ukraine, so there are no wounded or dead. But there are graves across all Russia of lost "on doctrines" soldiers and 20-year-old disabled people. And what about your environment? What do your colleagues, for example, who for certain know Nikolay's story, what do thay think of this war?

– My colleagues are well-educated and thoughtful people. It is not the environment from which people get on war. People from other social group are at war with Ukraine. It not even Muscovites who go to be at war. Moscow lives well and nourishingly, all the money is here. But 20 kilometers from MKAD everything differs. The average income is 20 thousand rubles a month. Besides, there live much less educated people. 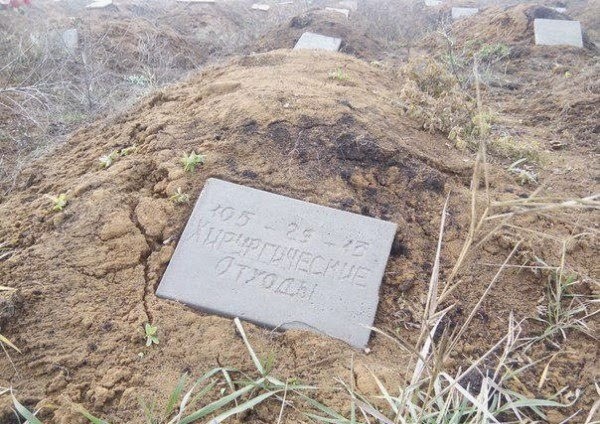 In social networks there were photos of a cemetery near Rostov on which, according to users of social networks, the Russian soldiers are burried who were lost on Donbass. Tens of anonymous burials are designated by plates: "Surgical waste". Photo: censoru.net

The level of a standard of living and education is consciously underestimated in Russia today. The poorly educated person will believe in any nonsense even if you will tell for example that there are some aliens in Ukraine which creep away worldwide. To such people it is easier to trust, than to think. Especially if they are paid for the war. They don't value their own lives, because they don't have the purpose of life. 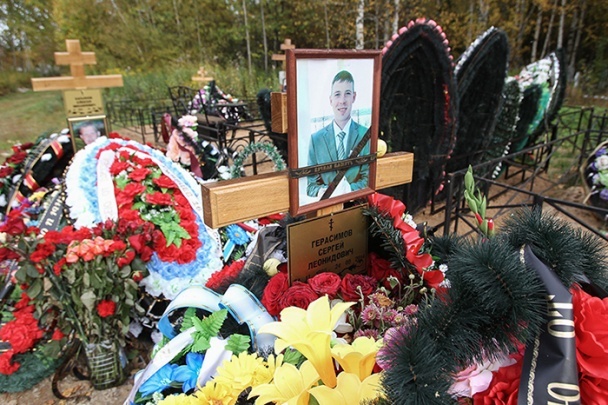 Grave of one of paratroopers of the 331st Guards regiment of airborne forces. Kostroma. Photo: nnm.me
Ukrainians have to withstand. Because if they not – all of us will return to the new big Soviet Union, with the new Stalin and new repressions

– The whole Russia pays for very expensive pleasure which Putin derives from war today, – first of all with human lives. But even if Russians will close eyes and ears, will stop thinking the ruble exchange rate will not become higher from that. The Kremlin burns millions in war on which it would be possible to develop the country …

– And what for? Imagine that you sit at the top of the mountain and control all oil streams. You need only to support your, so you give bribes to the police officers, to the military and a small group of people from the environment. There are huge sums of money in Russia. But it is not about people. It is even harmful if the people live well.

ВИДЕО
The BBC documentary "New Soldiers of the Russian Empire in Ukraine" – an attempt of the foreign journalist to clerify who goes to be at war to Donbass for idea of "the Russian world". Video: BBC Russian/Youtube