Tymchuk: We should be prepared for the fact that during the next two weeks the enemy can launch a major offensive

Verkhovna Rada deputy from the "Narodnyy Front" and the coordinator of the group "Information resistance" Dmitry Tymchuk notes that despite the removal of some types of fighters artillery, considerable enemy forces, reinforced by armored vehicles remain in their positions. 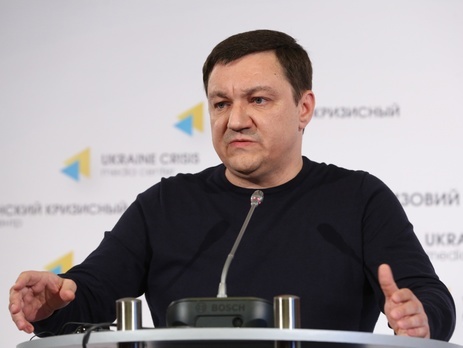 Militants in eastern Ukraine often mimic withdrawal of heavy weapons by simply changing the deployment of batteries and Ukraine should be prepared for the fact that the war is activated again. On this MP and millitary expert Dmitry Tymchuk edition commented to "Gordon" .

"The militants previously arranged "carousel "- a withdrawal of heavy weapons during the day and return to their positions during the night. In a southern direction, we all saw an interesting picture: on the notrh area of Novoazovsk militants have withdrown the weapons, but then it appears in a southern direction, it is simply being moved, but they represent it as a diversion of weapons "- says Tymchuk.

"However, we note that it is the much less of artillery, so there is an actual withdrawall. But then the question arises that it is great that they withdraw artillery, but there are still armored vehicles, in particular - the tanks. We see no decrease of the number of the tanks, and tank gun caliber is even more than the 100-millimeter of "Rapier". In this context, the withdrawall of weapons is conditional and we can not say that it is completel ", - believes the MP.

According to Dmitry Tymchuk, a scenario in which a political settlement will occur in the Donbass - is unlikely.

"If it is the most favorable scenario, the militants still'll take all the weapons and the Ukrainian side will do the same. Then we have two options: either then goes a political settlement with the special status of Donbass, providing preferences that Kiev is ready to give them, holding local elections. Or the second option - I think that, unfortunately, it is more likely - it's freezing of the conflict. The stories and tales that by the end of the year the control will be restored over the border from Ukraine, sound so fantastic that I personally I do not believe, "- said Tymchuk.

Until Russian troops will leave the Donbass, the control is out of the question a priori

"I was very confused by the algorithm and sequence of actions in the scenario spelled out by the Minsk arrangements. Due to Minsk agreements first elections are held there, and then only the foreign armed groups (ie Russian) are withdrown and then the control of the border regains. In fact, we get the Crimean scenario - Russian troops under his strict guidance hold elections in Donbass "- said the MP.

"To talk about the OSCE monitoring, control of the Ukrainian side is complete nonsense. Unless Russian troops leave Donbass, the control is out of the question a priori. In my opinion, it is clear as daylight. Nevertheless, they say, after the Russians will hold elections in Donbass, they will be removed and the control will be regained over the border of Ukraine. It is very strange, hazy, unclear and unreliable "- says Tymchuk.

According to Tymchuk, the attack of militants may begin at any time, and Ukraine should be prepared for such a turn of events.

"I talked to many of our representatives from state agencies and political community. I understand that Putin will try to capture Mariupol, to shake Odessa, Kharkov, Zaporozhie. Why everybody postpone the onslaught on Mariupol for May 9 and think that we still have plenty of time to prepare for it? I do not understand. We, in fact, state the existence on Novoazovsk-Mariupol direction of the shock troops of terrorist groups. I do not think that they created it to wait until the May 1st, and then will start to move. We must be prepared for the fact that during  the next two weeks, the enemy can launch a major onslaught, because he has the tools to do this, "- concluded Dmitry Tymchuk.
Tags: Donbas, Verkhovna Rada, Dmitry Tymchuk