The past year has been extremely difficult for Ukraine. After the defection of President Viktor Yanukovych in February 2014 Ukraine was on the verge of default, and the beginning of spring fighting in the eastern territories only made matters worse. The international community reacted to the events in Ukraine in different ways: some have expressed concern, others – provided real help. "Gordon" made the list of top friends Ukraine in 2014 and explains for what they have earned this status. 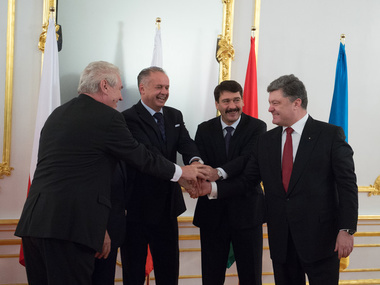 The first to provide financial assistance to proposed the countries of the European Union. It is the EU organized a donor forum to provide assistance to in coordination with the , , , and . Former European Commission President Jose Manuel Barroso said that the condemnation of 's actions and assistance to should become a thing of the world, noting that the EU is ready to provide a loan of € 1 billion. Countries - EU Member States have provided support to in the form of financial and humanitarian assistance. In addition, during the year the EU imposed a number of sanctions against , and against annexed . In December they gave the second tranche of € 500 million. The Heads of governments of the states - member of EU Photo: ERA

The - one of the first countries to condemn the policy of the in relation to . During the year, the government provided funds to , as well as humanitarian aid and non-lethal weapons . However, one of the most effective forms of assistance to from the were sanctions against . In December, the adopted the "Ukraine Freedom Support Act", including the expansion of military support - providing anti-tank and other weapons, anti-artillery radar, unmanned aerial vehicles and other military equipment. The state budget expenditure on these items amounted to $ 100 million in the 2015 fiscal year and $ 125 million for the years of 2016 and 2017. In 2014, the provided 20% more visas to Ukrainians, compared with 2013 year. To sum up, the last year the provided more than $ 450 million. Petro Poroshenko on the meeting with Barak Obama. Photo: ERA

The Canadian government last year introduced a series of sanctions against in connection with its aggression, as well as transferred funds to in the amount of more than $ 11 million. has allocated non-lethal weapons, protective equipment and money for the treatment of the Ukrainian military. In addition, the government announced its intention to offer a lethal weapon if there is a permission from NATO. The Government of Canada has renewed dialogue on free trade zone with and will provide a loan of 200 million Canadian dollars. Petro Poroshenko in the Canadian Parliament during the official visit to the country. Photo: ukurier.gov.ua
Poland

The official position of the Polish Government in relation to has repeatedly demonstrated through deeds. In addition to the transfers of funds also allocated logistical assistance worth over € 3 million, as well as funds for treatment and rehabilitation of ATO fighters. Only for medications Poles provided $ 500 thousand. Several dozen of fighters and activists of the National Guard of Euromaidan have been treated and rehabilitated in . The country also expressed concern over the fate of internally displaced people, providing them with financial assistance in the amount of $ 1 million. supported the sanctions against the ,  ratified an agreement with the EU and stated its willingness to sell lethal weapons. At the end of the year Ukrainian and Polish governments agreed to establish a joint customs and military-technical production . , and formed a joint military unit in the autumn. The Czech government has repeatedly devoted financial aid to , the total amount of which is more than $ 2 million. In addition, the Ministry of Defence of the directed winter uniforms for the Ukrainian army and transferred funds for the treatment of Ukrainian activists , and later - the wounded soldiers. The country has also taken on the treatment and rehabilitation of several dozen citizens of who were wounded in the area of ATO, and some activists who suffered during Euromaidan, and granted political asylum. The Czech government in 2014 decided to simplify procedures for obtaining visas for Ukrainians.

The Government of Japan has provided $ 1.5 economic aid and another $ 7 million - for the restoration of the social infrastructure of Donbass affected by the war. In addition, the country has invested heavily into the implementation of nine projects in in the fields of education and health. In October, the Japanese government has canceled the visit of Russian President Vladimir Putin in connection with the events on the east of . The position of the Lithuanian government in 2014 can be called as one of the most courageous. Supported by a number of European sanctions against , also announced the introduction of national sanctions and its readiness to completely abandon the use of Russian gas. In addition, the Government of Lithuania ratified the agreement between and the EU and they also offered their help to Ukrainian government in building a terminal for liquefied natural gas. During the year, took on the treatment and rehabilitation of several dozen Ukrainians and declared its readiness to take at least another 50 wounded soldiers in 2015. The Lithuanian government also provides numerous humanitarian aid for both fighters ATO and for internally displaced people . To improve the humanitarian situation in , has allocated 420 thousand litas, and for treatment of Ukrainians - 150 thousand litas. UK rather sharply condemned 's policy towards . The country's leaders called on to respect the choice of the Ukrainians, noting that a further escalation of the conflict could lead to the war between and NATO. In particular, Prince William called destabilization on the Donbas a threat to the whole . During the year, the British government sent to several parties of humanitarian cargo, including winter clothes and medical property, as well as non-lethal weapons . The size of the British financial assistance to for the solution of the situation on the was a million pounds. Also, the country adopted for the treatment of five Ukrainian army men.

, during the previous year has made great efforts for a political solution to the crisis, has proved to be a reliable partner for . In addition to the introduction of a number of sanctions against the , about 3% of German companies abandoned business in . The German government has also sent humanitarian aid to for more than $ 12 million and provided a € 2,5 million for the restoration of Ukrainian cities, the victims of the war. Several dozen of ATO fighters have been on treatment and rehabilitation in . On 1 November 2014 the government of this country has abolished the visa fee for Ukrainians.