Vasilyeva: The war will end in a month, not later, because Putin will run out of soldiers soon 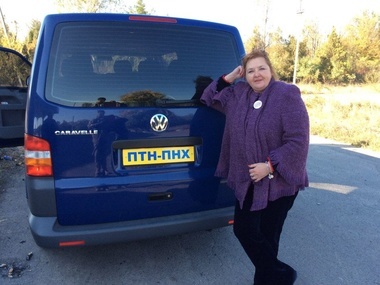 The Russian human rights activist, founder of Gruz-200 Facebook group Elena Vasilyeva said in an exclusive interview to the "GORDON" about her movie that was shot in Ukraine, about why the Russian soldiers want to be held captive and what dangers she faces in Russia.

A group "Gruz-200. From Ukraine to Russia" was created in Facebook three months ago; it become the only opportunity for relatives of the Russian military personnel to learn some information about their sons and husbands with whom there was no communication. Providing the war unleashed by Russia forebodings can be disturbing: he was sent to Donbass, taken prisoner or was lost.

The relatives could no suggest that the Russian soldiers were at war in Donbass. The founder of the group "Gruz-200" Elena Vasilyeva took the courage to tell them the truth. There were threatened and insulted more than once by those to whom this truth is inconvenient.

The number of group participants was multiplying, they are 28 thousand people today. Nobody hides in Russia that its army is at war in the east of Ukraine. Elena Vasilyeva says that contract employees and conscript soldiers refuse to go to Donbass, there are demonstrations of relatives under military units.

Not only mothers, but also Russian officers and soldiers already write to Vasilyeva.

Here some fragments from letters (the spelling of authors remained unchanged)

"… We got an order again, get it here and now. Well, there are no people already. Because everything those who were more or less efficient were killed long ago and now they take everybody, for example, cadets. They are sent to tanks because they were trained on new, and they understand something already. So they are taken without proper preparation. And they are still suckers. They say that several cadets were killed at the Donetsk airport. Also we are waiting for a list of those who were killed during doctrines. But a contract serviceman is one thing, but a cadet is still a student!"

"Elena, what is going on at all? We were sent to the doctrine first, they screwed us up with the maps. We were given maps of the Russian territory, squares, targets. We did not know first that they were Ukrainian settlements. We did the shooting and then we learnt that there were people there...

Those who returned from the pocket are very angry. They were waiting to share this in our mass media, but they are silent and talk nonsense about Novorossiya. There is no Novorossiya there. Just many criminals with machine guns.

Yesterday, two generals came to us, everybody went to the parade-ground, and they were telling us that the Ukrainians come to the settlements, kill all people who speak Russian, but at first the send people, ask questions and those who speak Russian are noticed, then special units are sent, they catch everybody and send to gas chambers - I am not joking, it is serious.

We could not stand any more, we started laughing. We were there. I came into huts. Normal peasants live there. Elena, explain me, what is there about Putin’s policy? I understand that he is commander-in-chief. But everybody lies, just everybody. Why shoot civilians, what is the sense?"

At the beginning of October, Elena Vasilyeva went to Ukraine, having promised to provide parents of Russian soldiers with incontestable proofs of participation of their children in the war in Donbass. She kept her promise. She not only took photos, but also shot an hour-long movie – "Ukraine: in Search for the Truth". The shrill documentary film shot on an iPad does not leave the Kremlin any chances.

– Elena where did you go in Ukraine?

– During one and a half months, I went round all the ATO zone, all eastern part, down to Mariupol, I was in trenches that were dug by the locals, I talked to the wounded, saw burials of unknown Russian soldiers, got acquainted with volunteers. I was looking for "spiteful Banderites", but I only met honest, hardworking, decent and sympathetic people. Nevertheless, I found two "Banderites" – in the form of monuments in Lviv and in Ternopol. I was helped to cut the movie in Odessa Odessa on Channel 7. I still have much more material, but I hurried to upload the movie in the Net when it became clear that there are new columns with Russian equipment coming to Donbass. I wanted to show it as soon as possible both to the Russians and the Europeans. It is very important that people in the movie speak without falseness, from the first person, but not as it done on "Kiselev-TV". The movie has been uploaded recently, but I was already called from London and New York and asked permission to translate it into English. I would like to show the movie in Ukraine, too, and shootings of its discussions in Russian will appear on the Internet. Let people in Russia see that Russian-speaking Ukrainians do not understand, what the hell Russian soldiers are doing in their country.

– And are there any feedback from Russia?

– Officers write and call. They tell that there is nobody to send to Donbass. The military personnel does everything to avoid going to war, they take sick-lists, leaves for family circumstances or simply refuse to go to Ukraine. 300 people from the military unit in Kamenka near St. Petersburg refused, more than 200 in Murmansk region, the same in Omsk. Officers say that they are hardly 100-150 people instead of 3-4 thousand according to the order.

– What threatens those who refuses to go to Ukraine?

– Dismissal. But people say: let it be, let them dismiss me if only I survive. In Kamenka, near Vyborg, where motor-shooting divisions are deployed, women gather under the check point every weekend, they come from other regions, they demand that soldiers should not be sent to Ukraine. But I know that two brigades from there already went to Donbass. And if military columns from Russia went without insignia before, judging by the videos sent me by officers, now brigade insignia are already openly written on the equipment – at least, it is known now where to send "Gruz-200" (Freight-200).

– And how many such "freights" came to Russia so far?

– Four and a half thousand, not less. It is difficult to count exactly, especially now that mobile crematoriums in which bodies are burnt at once appeared on the border. The other day, the Pskov deputy Lev Shlosberg received a reply from the Chief Military Prosecutor's Office of the Russian Federation to his request concerning the circumstances of death of paratroopers from units deployed in Pskov region. He was answered that it is a military secret. Officers write that the war will end in a month, not later, because Putin will run out of soldiers soon. At such outflow of contract employees from Donbass, they will be replaced with conscripts, and these are inexperienced boys who can either be killed at once or be taken prisoner.

– One of the characters in your movie says that the Russian military cadets were very much surprised when they were taken prisoner – they were sure that were on doctrines in Rostov region where they were simply passing firing tests, without suspecting that they actually shoot at the Ukrainian soldiers. If it is the truth, meanness of their commanders is even more terrible than Putin's cynicism. These children are a faceless, obedient crowd, but the commanders know everyone who was entrusted to them by parents…

– I get more and more questions how one can be held captive. They ask to explain the procedure. Wives of young contract employees, and the guys themselves write to me. These are those who do not want to shoot.

– Do parents of the Russian soldiers try to find traces of the missing children themselves?

– I heard they do. But recently there was a strange story. There was information about the death of the former Russian police officer native of Yekaterinburg Pavel Bulanov who was killed during the storm of the Donetsk airport on October 30. He had a sweater with a stripe of a security guard and patrol service of the police of Home Affairs Directorate of Yekaterinburg, he had a passport, a military ID and an individual sign. Bulanov's body is still in the Krasnoarmeysk mortuary. When uploaded information about him on the page of our group, people began to write that it was lie and when a video was uploaded, they recognized Bulanov. Now they ask how the body can be taken away. I answered: through the military office. They want to come, but they are afraid. I suggested meeting them in Kiev, but they wrote that they did not need my services – "you will come with journalists, and we want to take him away without fuss". I answered, "You went to kill loudly, and want to take away without fuss?"

– Are not you afraid of coming back to Russia?

– I have already been told that a criminal case has been opened against me in Russia. Bank cards including pension cards are blocked. The Ministry of Defense of the Russian Federation declared that I am not who I am, and it is an employee of the U.S. Department of State who keeps my blog. I was declared crazy by the Russian central TV channels. A major general called me a Ukrainian spy with a secret-service network. If 28 thousand participants of the group "Gruz-200" can be considered agents, a network is big indeed the. I must come back, of course. First, I left one and a half months ago, without warm clothes, secondly, if I ask for a political asylum in Ukraine, trolls in the group will write that I was doing everything for this very sake. But I understand that if I return, I will be taken to a madhouse or prison, or they will just shoot me. However, I love my country – there are a lot of normal people after all. But I will definitely not hurry back.

Elena Vasilyeva is now in one of Kiev hospitals. In fact, she is in a foreign city without money to love on and to buy drugs for. She has no warm clothes. "I very much hurried with the movie and overstrained a little," she explains after the interview. She worries most of all about the ability to work, which, according to the Russian measures, is considered a deed if even independent people keep silence out of caution.

It happened so that Elena involuntarily became a messenger between ATO fighters and volunteers in different regions of the country which, according to her, "is singed" with war. She admires the love with which Ukrainians care about their army.

"Wherever I went, I saw funds gathered for helping the army," she says. "Everybody helps: volunteers make military trucks of rusty pipes, woman knit balaclavas so that the faces do not get cold. Once I was called by familiar fighters from the front line, "We need thermal linen very much. Do you know where to turn?" I connected them with volunteers in Ternopol. A small, little-known town, but the volunteer movement is very powerful there! Children called me back, "Thanks. They gave us not only warm things, but also armored personnel carriers…"

For those who want to support Elena and her activities, below is the number of her card in Privatbank: