“Mother understands and supports.” In Kyiv activists “attached” LGBT flag to the sword of the Motherland Monument. Video 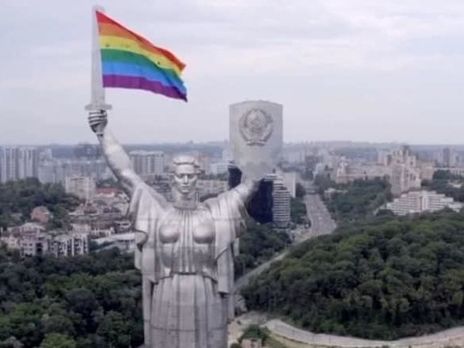 On June 21, Equality March took place in Kyiv. Due to coronavirus pandemic, it was held on-line. One of the video performances was organized on the Singing Field where the Motherland Monument, the highest monumental structure of Europe stands. Activists launched a drone with an LGBT rainbow flag on it. The copter took position over 102 meters high monument so that it appeared as flag was attached to the sword of the Motherland. The slogan was “Mother understands and supports.”

Since 2015 to 2019 there were five Equality Marches in Kyiv. They were accompanied by clashes between police forces and opponents of the events as well as between pride participants and members of nationalist groups.

This year five Equality March and other KyivPride events are held in social networks and various digital platforms. The organizers are planning to have regular off-line Pride-week in September.

The Motherland Monument is a work of architects Yevgeny Vuchetich and Vasyl Borodai. The monument was opened on May 9, 1981. It is located on the higher right bank of Dnipro River and is widely considered as one of the symbols of Kyiv.