Belkovsky: Death toll makes no difference to Putin. He is advancing. Ukraine is just space for trading with the West for him 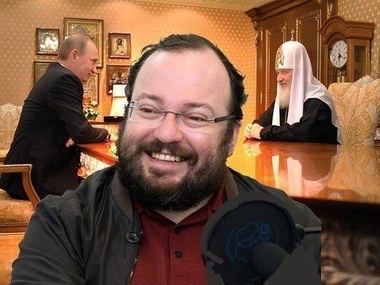 In an exclusive interview to the GORDON , the Russian political scientist Stanislav Belkovsky explained what message Putin is sending to the West through the acts of terrorism in Donbass, why Western leaders do not want to carry on negotiations with him, what Putin learned in "Bandits’ Petersburg", and whether confidential protocols to the Minsk accords actually exist.

Negotiations of Foreign Ministers in the so-called Norman format were held in Berlin on January 21. The day before the meeting, there was a press conference of the Minister of Foreign Affairs of the Russian Federation Sergey Lavrov who lied overtly claiming that there is no single fact confirming the presence of the Russian troops in Donbass and that Russia does not supply weapons to the terrorists. He also made it clear that Russia will not change its position in relation to this conflict even on condition of lessening of sanctions.

According to the Russian political scientist Stanislav Belkovsky, results of the meeting of Foreign Ministers could not change the situation in Donbass in any way. He considers that Putin will continue to blackmail the West with the escalation of conflict in the east of Ukraine until leaders of the USA and Germany initiate a direct dialogue regarding the destinies of the former Soviet Union and the world.

Stanislav Belkovsky has no doubt that today's act of terrorism in Mariupol and other tragic events of the recent days mean only one thing: Putin is advancing and continues to blackmail Europe. He is not going to stop the war.

– Stanislav Aleksandrovich, dozens civilians were killed and about one hundred people were wounded as a result of an act of terrorism in Mariupol today. Putin has gone over the top, speaking in a language so familiar to him?

– I think that Putin took the offensive at the remains of Donetsk and Lugansk regions. Ukraine is not the ultimate goal for him but rather space for trading with the West. Actually, his message is as follows, "You can consider me a moral monster, but it is only me who can solve the question of war and peace in the territory of Ukraine and, consequently, in the territory of Europe." The death toll makes no difference to him. Let's not forget that Russian citizens also die in this war, but it does not embarrass him. He is advancing.

ВИДЕО
Resident of Mariupol about shelling of the city by Russian fighters. January 24, 2015. Video: UKRAINE is EUROPE / Youtube

– As the summit with participation of Ukrainian, Russian, French, and German leaders, which was to be held on January 18 in Astana, did not take place, the world community hoped for some changes after negotiations of Foreign Ministers of "the Norman four" in Berlin. However, it seems to be in vain judging by the recent events in Donbass?

– One should not have expected real progress from this meeting. Russia will not make any actual concessions until some of the world leaders start speaking with Putin directly and he will regain the feeling that he is one of the key players in the world politics.

He only considers Obama and Merkel to be equal negotiators; however, they refuse to talk to him because they do not trust him and do not regard him as a person with whom they can negotiate the destinies of the world.

As soon as the summit in Astana was cancelled at the initiative of Germany and Putin was not invited to the 70th anniversary of the liberation of Auschwitz, a new war broke out in Donbass.

– During the press conference in Berlin, the Minister of Foreign Affairs of the Russian Federation Konstantin Lavrov, not feeling shy in front of the camera, publicly claimed that there are still no Russian troops in Ukraine. At the same time, the Internet is full of evidence and video records showing that Russian military equipment with flying tricolours drives in the occupied territory of Ukraine, there are records of confession of Russian prisoners of war. Do Putin and him still expect someone to believe in these cynical blatant lies?

– There is such a notion as formal approach. Lawyers and representatives of criminal circles often resort to it. Putin is a lawyer, besides, back in the first half of the 1990s he was holding the position of the deputy mayor of St. Petersburg which was "bandit’s Petersburg" then, and he was responsible for communications with the criminal world which he got to know very well. It is then that he learnt to substitute the actual with the formal. When such a person is asked a question, "Why is your back white?" he answers, "You do not have a certificate that my back is white".

– Lavrov declared once again that Ukraine does not observe the Minsk accords. But OSCE observers who are in Donbass see the real picture. Why is their reaction to continuous violations of the truce by the terrorists so slack?

– The OSCE has seriously depended on official Moscow for a very long time. It is not a secret for anybody, therefore its conclusions cannot be very anti-Russian. But it would be even worse if there were no OSCE representatives in the east of Ukraine. This organization nevertheless plays a positive role.

– Churkin is not an independent figure, he is a diplomat relaying the point of view of the president.

– But it is him who has to blush before colleague diplomats. Of course, if he knows what it means…

– This person perfectly understands his role. I think that it is the essence of his informal contract.

– The DNR leader Zakharchenko declared the other day, "No more truces… We will advance to the borders of Donetsk region". Do you think that DNR and LNR leaders can take their own decisions now? Or are they sent the texts of their statements from the Kremlin?

– DNR and LNR authorities can make independent decisions only concerning local economy, redistribution of goods and financial flows, but not concerning war or peace with Ukraine. Zakharchenko certainly received an instruction from the Kremlin. Putin is still blackmailing with war escalation – not so much Ukraine as the leading world powers, first of all, the USA and Germany.

– Do you think that, despite being calm on the surface, Putin is hectically looking for a way out of the stalemate in which he drove himself, or does he stubbornly stand his ground?

– He stands his ground. There are many influential people in Moscow who feel increasing panic concerning what is going on in Russia and around it. But Putin does not have such sentiments. He considers himself cleverer than his opponents meaning not the Ukrainian leaders, but the Western ones, and not even all of them. He thinks that he has more time because Obama and Merkel will resign in two years, while he will remain in power. He also hopes that new leaders who will succeed them will be more compliant.

Putin is sure that patience of the Russian people and their being used to financial troubles will help Russia to withstand the sanctions without large-scale destabilization. According to his calculations, Ukraine will soon be on the edge of an economic collapse, and the West will be compelled to turn to him in order to save Ukraine. It is then, as he hopes, that the dialogue that he is looking forward to will begin.

Besides, he uses every opportunity to aggravate contradictions within the Ukrainian elite. An example is the scandal over signing of the contract on delivery of electric power from Russia between Ukrinterenergo and Inter RAO in which the Crimea is designated as "The Crimean Federal District of the Russian Federation". Another example is the informational rumour about confidential protocols to the Minsk accords aimed to question honesty and transparency of Poroshenko’s actions.

– Do you assume that confidential protocols to the Minsk accords really exist?

– I have not seen them myself, but diplomats I communicated with claim that these protocols are simply printed text without any signatures. Authenticity of these protocols cannot be proved.

– Putin blackmails the West with the war in Donbass – the West, in its turn, continues to strengthen sanctions. It seems to be a vicious circle?

– I would not exaggerate solidity of the West because there is a group of countries in the EU that want to resume dialogue with Putin and are ready to support partial cancellation of sanctions for this purpose. It is the so-called southern flank, including Italy and Greece, France partly supports this position. But the USA, the world leader, and Germany, the EU leader and the main sponsor of economic problems of the European Union, have a rigid position concerning Russia. However, Putin expects to split Europe and win over part of the countries.

Putin makes advantage of the fact that the USA and Germany, so, the EU on the whole, are categorically against war with Russia. The West is not ready to be at war, while Putin is ready. Therefore, escalation of the conflict will continue, lessening only when Putin receives some pacifying signals from the West. He imitated de-escalation as long as he expected to discuss the situation during the summit in Astana and the events in Auschwitz. Many mistakenly took it in all good faith. But it is illusion. Putin will not leave Donetsk and Lugansk in peace because he does not want to lose his advantage over the West. He cannot afford it.

ВИДЕО
Documentary of Espresso TV about participation of the Russian troops in the war in Donbass. Video: War Donbass / Youtube

Cancellation of the meeting in Astana and not being invited to the 70th anniversary of the liberation of Auschwitz was regarded by Putin as a slap in the face from the western partners; escalation in Donetsk and Lugansk regions started right after it. But everything is presented as if it was stipulated in the secret protocols that the Donetsk airport and Debaltsevo belong to the separatists; allegedly, they simply take what is due to them.

– It means that you think that there is no way to stop this undeclared, senseless war during which thousands of people were killed to please Putin's ambitions?

– Unfortunately, it must be admitted that there is no reasonable, consistent, and logical scenario of getting out of this deadlock so far. One should only wait for the so-called "black swans" – some accidental, unpredictable events that can change the situation.

– There are disputes concerning the need of the martial law in Ukraine now. Do you consider that it would be the right decision?

– Poroshenko understands that if Ukraine declares martial law, Putin, may, for example, send peacekeeping contingent and strengthen military and economic support of separatists so that they could attack Kharkov. Poroshenko’s situation is very difficult in this respect.

– By the way, there was information on the Internet that flags with an inscription "Kharkov People’s Republic" are sewn in Makeyevka. The order for one thousand items is to be executed by the end of the week…

– It seems more like blackmail again – like an element of hybrid war. In fact, the Kremlin is perfectly aware that there will be no mass actions for separation from Ukraine in Kharkov.