Volunteer Kasyanov: The enemy wants to create several pockets where it will be able to crush our troops and virtually leave Ukraine without its army 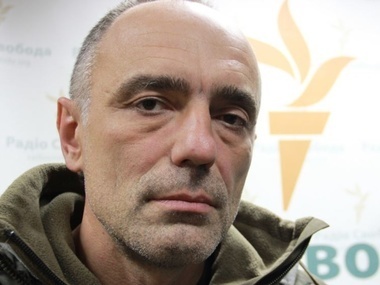 Kasyanov: the Russians transported at least 37 tanks, about fifty armored vehicles and about a hundred trucks with infantry to the region of Bakhmutka during the previous night
Photo: Radio Svoboda

The Donetsk airport is of no strategic importance now, the enemy will try to benefit from the situation to draw the attention of our farsighted command away from other sectors, the volunteer from the SOS Army community and blogger Yury Kasyanov reported.

The Ukrainian command is clinging to the Donetsk airport only because this object affects the image of the Ukrainian President and the Head of the General Staff while the enemy draws our attention away from other parts of the front. The public activist Yury Kasyanov said about this to the GORDON .

"I think that the guys who were left in the Donetsk airport and who probably fight in the very hell near the new terminal must be evacuated by any means. The Donetsk airport does not exist as a defense object. It is burnt land, and it is of no strategic importance. It is just a trap for our troops and an attempt to draw our attention away from other sectors of the front. Our generals cling to the object only because it is important for the image – it is a way to save the image of the President and the Head of the General Staff," the volunteer noted.

According to Kasyanov, the Ukrainian military must consolidate their positions in another more favorable place. "The main battles are unfolding in other sectors of the front. The enemy has benefited from the current situation in the Donetsk airport to divert the attention of our farsighted command from other regions. The most dangerous sector today is the region around Bakhmutka, direction to Lisichansk, Severodonetsk and Popasnaya. The enemy can break through there and advance to Kramatorsk and Slavyansk, thus surrounding the Debaltsevo group. The enemies can go northeast along the administrative border, they can cross the open state border near Krasnaya Talovka as separatists and advance to Starobelsk surrounding our troops and Stanitsa Luganskaya. A dangerous sector is from Volnovakha to Berdyansk. In the area of Mariupol, attention is distracted by fierce shelling attacks at the city. The enemy wants to create several pockets where it can crush our troops and virtually leave Ukraine without its army," the activist is convinced.

According to Kasyanov, the Russians transported at least 37 tanks, about fifty armored vehicles and about a hundred trucks with infantry to the region of Bakhmutka during the previous night. "Russia dressed and equipped separatists and Don Cossacks there long ago. However, it does not seem to rely on them very much, so regular troops of the Russian army were transferred there. We ran into well-equipped and perfectly trained Russian troops at the 31st and 29th roadblocks. The group of Russian troops is getting stronger in this sector. I expect that fierce fights will take place in this area in the vicinity of Bakhmutka highway – the enemy will try to surround our group from the 24th brigade in order to push her to the Seversky Donets near Krymskoe and will then try to break through to Lisichansk and Popasnaya. It will then have space for further actions and will be able to attack Artemovsk, Slavyansk and Kramatorsk," the blogger emphasized.