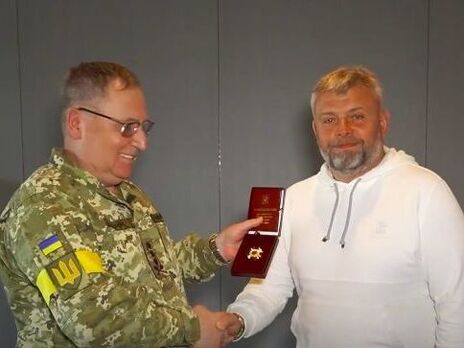 Lieutenant General Pavel Tkachuk presented Hryhoriy Kozlovsky with the Badge of Honor on behalf of the Defense Minister
Photo: nta.ua

The honorary president of the soccer club "Rukh" (Lviv), Hryhoriy Kozlovsky, has been given the "Badge of Honor", the highest award for civilians, for his weighty contribution and assistance to the Armed Forces of Ukraine. This was announced by NTA on May 19.

"This is an award and gratitude for productive work for the good of the Armed Forces of Ukraine and for the good of our state of Ukraine," said lieutenant-general Pavel Tkachuk, who awarded the Badge of Honor to Kozlovsky on behalf of the Defense Minister.

The agency notes that for his charitable activities and assistance to Ukraine, the honorary president of the soccer club "Rukh" received 15 awards in different years from the President and the military.

"Such things at such times should be talked about, because first of all we must show our children an example of how to love the country, how it should be built and what is worth doing for the country in such a difficult time. This is first and foremost an example for my own children,– Kozlovsky said. – Of course, this is encouragement for other businessmen to be active and to stay together with the people of Ukraine in such difficult times. In Ukraine and with the people of Ukraine."

The authors of the material noted that last week he decided to resign as a deputy of the Lviv regional council and said that during a full-scale war in the country there are more pressing matters than politics.