Doniy: Changing districts of Luhansk region is the right measure, but it will not help unless there is an appropriate response to the aggressor 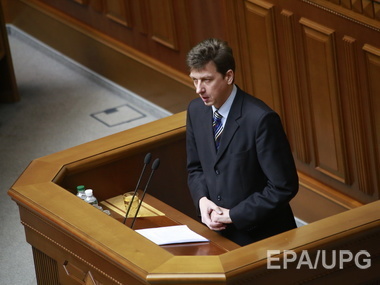 According to the non-affiliated deputy Oles Doniy, administrative reformatting of Luhansk region can help the local population, but the main problem in the region lies in the military tactics of the Ukrainian army.

According to Doniy, the adoption of the resolution on changing district borders in Luhansk region by the Verkhovna Rada yesterday is the right decision. He commented on this for the " 'GORDON"' .

‘The absolutely correct resolution was initiated by General Moskal. First of all, I would like to say that the appointment of General Moskal is one of the few sensible ones over the last weeks of regular appointments. He previously headed the region, he knows security agencies firsthand, he is one of the few people who demand punishment of people who are guilty of shooting on Maidan,’ says Doniy.

‘Moskal says that there are no funds being forwarded for Luhansk region from the government, they are broke. He says that the National Security Council Speaker gives unverified and often false information, and they face daily attacks from the Russian territory,’ stated the deputy.

Doniy noted that the resolution was conditioned by the need to restructure the districts whose administrative centers are now in the territory occupied by the terrorists.

‘The resolution he initiated is conditioned by the need to finance villages and towns that are in the liberated territory. Administrative centers of some districts are in the occupied territory, while some villages and settlements are liberated. For example, Shchastie is directly subordinate to Luhansk city council, which means that the treasury automatically blocks all payments for this territory. It is necessary to redivide the territory into districts so that people could receive pensions and social benefits. This is what Moskal’s resolutions aim at. In this case, it is definitely the right decision aimed to help local people,’ says Doniy.

However, according to him, the main problem in Luhansk region is a little different now as the terrorists continue attacking the Ukrainian territory.

‘But there is another problem associated with the absence of instructions to adequately respond to the fire, and that is not the problem of local administration or the Verkhovna Rada, this is rather a problem of general military tactics. There is fire from the other side without adequate response. There are one-side attacks on our territory; for example, the separatists shoot civilians and hospitals in Shchastie,’ comments the deputy.

‘Azov battalion commander said that even during this fake truce there was attack and 40 km advance of Russian troops in the direction of Mariupol. That is there was retreat of Ukrainian troops and seizure of 40 km. In this regard, any zoning will get out-of-date if the enemy’s advances continue. Therefore, there should be an adequate response. If there is fire between Israel and the isolated Palestinian territory, regardless of whether they are at peace or at war, there is always an adequate response and the fire is suppressed. And we have one-sided fire without any adequate response. When did the Ukrainians went up to the air in order to suppress the firing points attacking our territory? It is known that the hospital in Shchastie was attacked with casualties among civilians. Was the enemy’s fire suppressed there? If there is no appropriate response, the change of the districts will not yield any results,’ added Doniy.

The Verkhovna Rada supported Petro Poroshenko’s initiative on October 7 and changed administrative borders of certain districts in the region.