Chumak: Until we introduce the accumulative pension system, the existing system will continue killing us 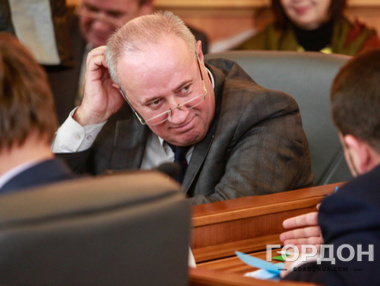 Chumak: We accepted yesterday not a popular decision, we will be cursed by all working pensioners who will pay off 15% of the pension
Photo: Alexander Khomenko / Gordonua.com

Unless the economy works, whatever you do the deficit of the budget of the fund will be the same, said MP from the Bloc Poroshenko Viktor Chumak.

Unless the new pension reform is launched and the new accumulative pension system is established, the current system will continue to kill the economy, said in a comment to "Gordon" people’s deputy Viktor Chumak.

"In the current economic climate we should search for any possible opportunities to fill gaps in the budget and the pension fund. If we start from April, yesterday's decision will bring about a half to two billion hryvnias at once. However, this solution is half-hearted. Unless the new pension reform is launched and the new accumulative pension system is established, the current system will continue killing us. PAYG pension system means that working people support pensioners. Unless the economy works, whatever you do the deficit of the budget of the fund will be the same because there won’t be any deductions from the broken economy in the budget of the pension fund, "- said the MP.

According to him, the Verkhovna Rada adopted yesterday a series of unpopular decisions.

"Yesterday I voted reluctantly, but I understand that the first step is still to be done. I understand that this is not a very popular decision and we will be cursed by all working pensioners who have to pay off 15% of their pension. We will be cursed by government officials, judges and prosecutors who are taken away all their pension, but currently there is no other solution, "- said the deputy.

According to Chumak, there was a strange situation with pensions of People's Deputies.

"Yesterday I deprived myself of military pension, which was more than my current salary. And I still have not decided what to choose, deputy salary or military pension. I have a month to think. It is an absurd situation on the MPs. I'm not on the labor employment work, I have not got here on someone else's place, I have an elective office. The situation is that I seem to be running the MP. MP does not work, he serves the community. People's Deputies, if they are of sound mind may work even being 80 or 90 years old. There is no limit to the deputies that they can go to retire in 65 years. I understand when people's deputy working civil servants and receives a pension as MP and then as a civil servant must choose either there or here, "- said the MP.

Chumak thinks that it is important that we could maintain the form of pensions for former combatants and the victims' families.

"We have now launched this mechanism, when we say that the judges should be changed, they are dishonest and corrupt. The judges do not have pensions, they have life-long maintenance. They leave it permanent alimony in the amount of 60%. But we should be careful with the judicial system, because once their credibility must be returned. How to recover trust - a serious matter. So that people do not worry - for those who have lost family members in the ATO, we preserved everything as it was before. As for combatants and disabled of 1, 2, 3 groups ", - said Chumak.
Tags: Verkhovna Rada, Viktor Chumak, government
Опрос