Donetsk journalist Garmash: In some areas of the Donbass pensions are not paid for three months, and there were old people who have nowhere to go. 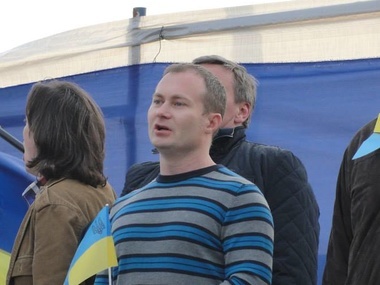 Chief Editor of "Ostrov" Sergei Garmash told that the people now living in the Donbas, became alive hostages of terrorists, and many settlers returned because they could not find a place in the rest of Ukraine.

Those who couldn’t find appropriate dwelling and are deprived of means of subsistence before starting of the winter period are returning now to Donbass. The coordinator of the Committee of Patriotic Forces of Donbass, journalist Sergei Garmash told about this the edition GORDON.

“People, who were leaving and believing that part of military operations would stop there at the beginning of August as the Minister of Defense and the President promised us, are returning. They faced the problem that here is no place to live in, and it isn’t possible to overwinter in summer camps, children should go to school, there is no warm clothes, no work, that’s why those who didn’t find all this here, in free Ukraine, are returning, even being the patriots of Ukraine. There are native walls, as minimum, and plus maybe someone has working places. Yesterday my friend’s mom who is very patriotic, took part in all actions, went away. The Director of the school called her and said something like we need you here. In general, she was called to work and she went”, told Garmash.

“In fact military operations are in progress in Donetsk and don’t stop. Yes, people become in fact alive hostages of the terrorists and risk their lives. But our government takes notice of this problem not very much, as usual, though probably a million of people from the Donetsk and Lugansk regions went away. One can judge about the number only because of, for example, that my friend, who went away and returned, commenced working at school and there are 7 pupils in the form. But nevertheless she gives classes. If earlier there were 30 pupils and now 7 – here is a proportion for you, how many left and how many stayed. People risk their lives because their state Ukraine didn’t gave them anything instead. This is yesterday’s allowance that Yatseniuk said, 400 hryvnias, it seems to me to be just a mockery (material assistant that the government will pay to the registered in-migrants. - GORDON). Let him try to live at least a week for 400 hryvnias”, pointed out the journalist.

In particular Sergei Garmash underlined that there is catastrophic situation with pension support in Donbass. Many old men and recumbent patients stay without means of subsistence.

“There is very serious situation with pensions in Donbass. They are not paid for two months already or event three. Someone hasn’t received it since August, someone even earlier. And that powers of attorney that recumbent pensioners write for their children in order the children receive pensions in the free territory are not accepted and pensions are not paid. It seems to be some kind of a pension genocide”, said Garmash.

“It is clear that the Pension Fund should receive deductions from the operating enterprises of the Donetsk region, but they don’t work and that’s why assets are limited. Then let’s tell people this straight. Then one should think, draw up some kind of registers of old men who cannot go and let’s work in some way with them. And in practice we left them. There are cases of starvation deaths. In Lugansk, I know, they were even earlier. I mean those who stayed there. Probably they would go but there are lots of recumbent patients. Lots just have nowhere to go, there are such grandmothers and grandfathers. They have no means of subsistence at all. They just cannot go away and nobody is engaged in their carriage. And someone can but doesn’t want to leave. Late in life it is better to die in your own house than to start life from the very beginning”, added Garmash.