Dzhigarkhanyan: Pardon my rudeness, we are all standing doggy style and repeating, ‘May Putin be good’ 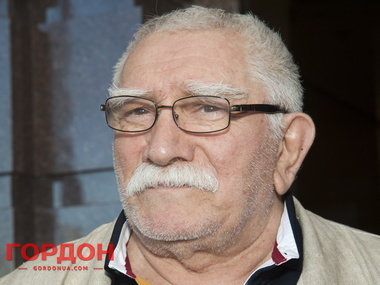 The famous actor Armen Dzhigarkhanyan explained in his interview for GORDON why Lenin monuments should not be toppled, pointed out the difference between the Russian and Ukrainian languages, and said that Putin’s main problem is that nobody tells him the truth.

Over six months ago, when Crimea annexation was in full swing, the famous actor and director, people's artist of the USSR Armen Dzhigarkhanyan was one of the few who expressed support to Ukraine and did not sign the collective letter from the representatives of the Russian creative elite that expressed public support to Vladimir Putin’s foreign policy.

‘The Armenians have a proverb,’ Armen Borisovich kept saying in March, 2014, ‘one fool threw a stone into water, and 100 clever people cannot take it out.’ The actor could not undestand how Russia and Ukraine can be enemies.   GORDON phoned Dzhigarkhanyan to find out if he still believes that our countries will improve the relations after annexation, war in Donbass, the crashed Malaysian "Boeing" and thousands of victims.

–It was Vladimir Putin’s birthday the other day. What would you wish him?

– To stay safe and healthy. And Russia to become a little better than we want it to be. If we are people rather than brutes, we will find courage... (Pause).

–... to openly tell the truth. Two or three years ago, I played a part in the documentary about Nursultan Nazarbayev (the President of Kazakhstan since 1991 to this day. – GORDON) and met Vladimir Putin. I told him, ‘Russia is a bad country because you rule it by yourself.’ I had the courage to say it.

Putin is the head of the state, but there is a second, a third, even a fourth opinion apart from his! And it turns out today that, pardon my rudeness, we are all standing doggy style and keep saying, ‘May Putin be good.’ But he cannot, someone should openly tell him the truth. We elected him to rule the country, and it means we need to demand from him: say, do not sell this or let us buy that.

We finally got the right of choice. We have been told who to elect in the USSR for over 70 years. We played soccer, in the cinema, in the theater by request. It was called socialist realism though nobody still knows what this is.

– Does the problem of relations between Russia and Ukraine really lie in the fact nobody tells the truth to Putin?

– It is a very difficult thing, my girl. We achieved the right of choice. I am Armenian, but I have been work in the Russian theater for 60 years. Can you imagine me waking up at night and remembering only Armenian songs, or trying to hide or being afraid to speak Russian? That is impossible! It cannot be a problem! It has to be my choice rather than my problem.

– Frankly speaking, I did not understand your answer...

– Today's situation is a huge loss for us. Every year we came and worked in Ukraine, in Kiev. It was a great time! Well, go ahead and tell us now, ‘No, we do not let Russians come to us, they are barbarians.’

It is sad that there were people who buried 400 people in a common grave in Donetsk. Murderers! It is very terrible, but we must speak up and look for the right solution. You should not be afraid to tell the truth.

– If we watch Russian TV, people can believe not only in 400 corpses, but also in boys crucified at every corner. By the way, OSCE and even the ‘DNR’ representative Andrey Purgin disproved information on mass burials in Donbass.

– You know, what is the bad thing? Rude and ungifted people rule and direct us. I have close friends in Kiev, they are like brothers to me. We miss each other, but we cannot meet.

It is always the same: times come and we erect monuments, other times come and we tear them down. I saw a portrait of the first U.S. President George Washington. Suppose, somebody told me to throw shit at it. What for? So let us throw away David tomorrow because he is not ‘our man’ (David Sasunsky, the hero of the Armenian epos named the same. The monument to David is erected in Yerevan. – GORDON).

– As far as I understand, we are smoothly passing to the subject of demolition of Lenin monuments in Ukraine. Why did it make regular Russians so indignant?

– Because those who tore down the monuments are silly people. Silly! How much time has passed since Washington headed the USA? It is more than 200 years, but it did not occur to anybody to destroy his monument. It should not be done, it is hopeless. Monuments have always been built. Let them stay, that is a beautiful thing.

– Maybe, the granite Lenin monument is ‘a beautiful thing’, but at the same time it is a symbol of the terrible Soviet past...

– But the monument was built by those who lived before you. If you disagree – walk past, but do not destroy. I am a Christian, but I also like Catholic churches and Turkish mosques. Even if I did not love, it is not the reason to destroy something that is unpleasant, is it?

If something is unpleasant – do not go, but why turn it into a toilet? How can you respect people who tear down monuments? They will make a toilet out of their parents. It is a very bad thing.

- Why does Ukraine cause such aggression among the overwhelming majority of Russians?

– It is stupid. Outstanding human stupidity. My mother always said, ‘Sit down for five minutes, think, and then make a decision.’ Everyone can play dirty tricks in a fit temper. But it is very bad, it is a shame, it should not be. You can shoot me, but I honestly do not understand: are Ukraine and Russia really different countries?

...You are a young girl, you should know what love is. If you do not love a man, you simply tell him, ‘I do not love you, please, leave me.’ But if it is always half-way: here we make shit, but still will be friends - it is wrong.

– And if the man goes off into hysterics, threatens me, annexes my own apartment, demands to return to him immediately?

– Both should look for a way out. Everything can be done on one important condition – you must want to do it. If there is no desire – it is possible to find any excuses: for instance, she has a big bum, and he has a little head. It is possible to trash each other in one minute. But what for?

All of us are different. For example, tomorrow we will go to an Armenian restaurant. I will treat you with the Armenian dish called hash (beef soup. – GORDON). If you do not want it, I will offer, ‘Let's eat dumplings.’ Everyone must be given a choice. It is terrible if Russians and Ukrainians remain enemies at the level of genetic memory.

– After the Crimea, Donbass, thousands of victims... Are you sure that Ukraine and Russia will restore their normal relations?

– Surely! Otherwise we will be angry ourselves. It is very difficult for people to live together: one likes porridge, the other prefers tomatoes. But we are still neighbors though angry people blow it up into a disaster. We know similar stories since the time of Jesus Christ.

I came to Kiev for filming recently. I adore your city, I love your country. The Ukrainian tour was a holiday for our theatre! Honestly I do not want to flatter anybody. Let us look for love, not hate. All of us need love. Also do not think that you have nothing to do when people are killed somewhere. It can involve even your parents, sisters, and brothers. Sooner or later we will all agree. We must agree.