Economist Lanovoy: The probability of a default is minimum – the whole world is turned facing Ukraine and will help it 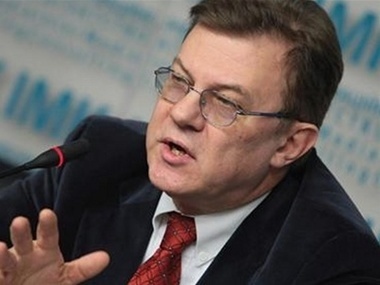 The famous economist, the president of the Center of market reforms Vladimir Lanovoy predicts more than 10% of falling of GDP of Ukraine, long crisis. Still, he is sure that national economy after all will stand.

Ukraine is in the position of "the bleeding wound", – it is connected not only with events in the east of Ukraine, with destructions and costs of war, but also with a bad condition of economy, the economist, the president of the Center of market reforms Vladimir Lanovoy reported in the comment of "GORDON".

"The economy falls, the industry falls, the financial situation is very unstable, simply broken off. People take away money, banks in the majority are bankrupts. Now there is a negative tendency in general, the GDP of the country falls and by the end of the year, unfortunately, this falling is accelerated. Probably, there will be more than 10% falling of GDP. Naturally, on this background there are no currency and everybody hides it. Still we cannot say that "the patient is rather dead". Any economy goes out off crisis, but, in my opinion, this crisis is of longer extent than our management thinks. It, probably, after all will last not for one year", –the expert says.

According to Lanovoy, the economy will stand because its main component is people.

"People will survive, they will make everything with their hands even if the state is not able to pay means for existence. We went through the same in the 90th. In 1997 we had a two-year debt on pensions, but nevertheless the pensioners survived. So people will survive and then they will make all efforts which are required for the economy to start working. Unfortunately, now we observe the process of destruction of economy", – Lanovoy told.

The economist was surprised by unexpected information of Moody agency on a possible default of Ukraine in connection with the Russian credit which was taken  by Yanukovych.

"It turns out that the government did not take this debt on service and, of course, the creditor can declare it in the international market, and there will be the corresponding consideration. The consideration can be judicial and the court can make the decision to charge money off the Ukrainian accounts in favor of its debt. Also the corresponding sanctions against our money, accounts, property can be declared. But we know that now there is a process of consolidation of any money of different sources. Recently Lagarde declared that the help to Ukraine will be increased because the situation worsened and now requires more money. Probably, she also means this obligation to Russia. Therefore it seems to me that financial participants of the international process will help to resolve this issue, to pay off a debt. Because Russia will disagree on other forms of its restructuring, monetization, securitization of a debt", – Lanovoy considers.