Economist Nayman: People should not have an impression that the economy is done at the expense of common people 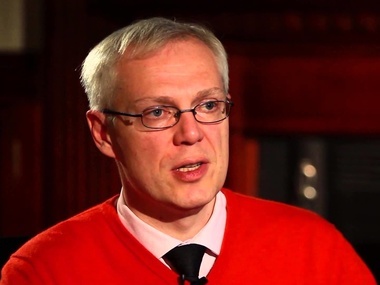 Nayman thinks that higher education must be paid for
Screenshot: LIGA ZAKON

The Doctor of Economic Sciences and Managing Partner of the Capital Times investment company Erik Nayman believes that the reforms must in the first place concern the system of public purchase.

The economist Erik Nayman considers that the government must inform the citizens about its plans about reforming the country and curtail budget funds not only at the expense of common people, but also at the expense of officials. Nayman said it in his comment for the GORDON edition.

"People should not have an impression that they have been deceived, that the reductions are done only at the expense of common people, while officials continue living as before. We must change the system of public purchase in the first place," Nayman thinks.

"A reform of Naftogaz is required, because hundreds of thousand hryvnias of budget funds are spent on it every year. Within the pension system, pensions for privileged officials, such as prosecutors, court officials, militia, and security officers should be re-considered, because it turns out that working citizens receive low pensions whereas people who have not worked in business or earned money for the society have rather high privileged pensions. Reforms must be well balanced, and their contents should be conveyed to people," the economist pointed out.

According to Erik Nayman, the reform of health care system should be based on the insurance system, following the example of Canada or Great Britain.

"Free medical care is an important aspect of any society. But we have pseudo-free medical care. You come to hospital and you are forced to buy everything. We understand that the salaries of doctors and other health care employees are below all possible limits and standards. There should be a transition to medical insurance. However, we should not adopt the American model. It is inefficient, defective and feeds the insurance sector. One of the most effective models are Canada and Great Britain," Nayman considers.

The expert thinks that the government should consult people concerning implementation of reforms.

"Referenda are held in Switzerland on such important issues, nobody makes decisions for citizens. Our citizens are confronted with the accomplished fact once again: you will live this way from now on. Our authorities are lazy, they do not perform any informational discussion or ask people and they get Maidan as a result," Nayman noted.

Volynets: Yatsenyuk’s reforms are not elaborated or publicly discussed. I think it will be a failure G
12 december, 2014 22.10 |comments: