Ex-Deputy of the State Duma Markov: The regime of Kiev junta will collapse itself after the hard winter and sobering of Europe 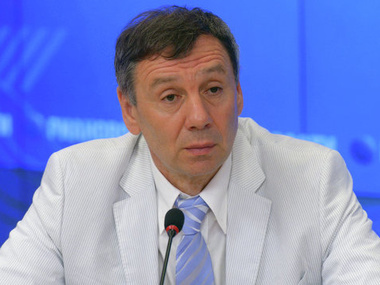 Markov is convinced that the Ukrainian government will not last long
Photo: azerros.ru

The ex-deputy of the State Duma of the Russian Federation Sergey Markov considers that Europe will refuse from the support of Ukrainian authorities.

The ex-deputy of the State Duma and member of the Public Chamber of the Russian Federation Sergey Markov believes that the UN cannot prohibit Russia from protecting its interests by means of the military. He said it in his comment for the GORDON.

"The UN is able to stop big war. The UN cannot prohibit large countries like Russia or the USA from protecting their interest, in particular, by means of the military," Markov believes.

"The UN has several instruments for the achievement of its aims. The first instrument is the right of veto enjoyed by the permanent members of the Security Council. Thanks to this instrument, the decisions of intrusion into Syria and Ukraine were not made, though the USA might have wanted it. We all know that Russia has the right of veto, and it will exercise it," the Russian politician noted.

According to Sergey Markov, Russia would have carried out a large large-scale military operation in Ukraine if it were not for such a dialogue platform as the UN.

"The UN is a dialogue platform that allows for spreading of its opinion among the public. In particular, if Russia did not have an opportunity to share its point of view with the world community and the European Union, Russia would have no hope that the European Union will refuse support of Kiev nationalist junta," Markov reported.

"In this case Russia would probably carry out a large-scale operation for liberating the population of south-eastern Ukraine from this terror. And the UN instrument allows Russia to hope that the Russian point of view will be heard, and the European Union will stop supporting the extreme position of Washington, and, as a result, the terrorist regime in Kiev will collapse itself after it loses external support," the politician added.

"I think that it is mainly due to the UN instrument that Russia followed the “winter” scenario rather than the “war” scenario. I think that after several hard winter months and sobering of Europe, the Kiev regime will collapse," Sergey Markov concluded.
In his opinion, Europe’s policy towards Ukraine has been changing radically recently.

"I have just returned from the Russian European forum, and I can say that if the Europeans criticize Russia in public, among themselves they agree that Europe has taken wrong decisions at all milestones of the Ukrainian politics. Absolutely all! Europeans ask one another and say, "How could it be that we democrats recognized the Ukrainian government that includes neonazists and Svoboda? It is a terrible mistake. So Europe may turn away, and there will be winter after which the junta will collapse, and then we will solve the Ukrainian crisis in a normal peaceful way," the Russian politician summed up.

Political scientist Paly: UN now is a platform for discussions, and nothing more G
14 november, 2014 18.09 |comments:

Lubkivskiy: Putin is walking with a lighter around a gas station. Just a trifle can cause a serious world fire G
13 november, 2014 23.45 |comments: