Five signs that Minsk-2 agreements are doomed to failure 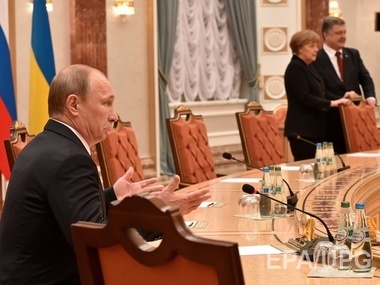 Putin: We believe that the surrounded in Debaltseve 6-8 thousand security forces lay down their arms
Photo: EPA

To stop the war in the Donbas we will not soon be able to, and Minsk new agreements do not guarantee this, says columnist Eugene Kuzmenko to "GORDON" . Why in the implementation of the signed document do not believe the negotiators and politicians in Europe and the United States, the author tells in his column today.

After a sleepless night in Minsk the same questions are on everyone's lips . Will the document signed in Lukashenko's land work? Will the signatories perform the agreement? And why should we believe in Minsk-2 agreement, if the first one did not work out?

I closely followed the negotiations and, to my regret, counted five external signs of why the new agreement will not work. I mean features, not reasons. Actually even without those reasons you know why Putin intends to stay in the Donbass, and why a passionate defender of Ukraine John McCain is dissatisfied with fixed distribution of power. So let's talk about the language of words, facial expressions and related actions.

So, the first sign that the current contract, prepared in Minsk will live short and unhappy life - sudden departure from the Palace of Independence by Angela Merkel and Francois Hollande. It was sudden and we cannot consider the words of the French president on the "relief for Europe" and German Chancellor dry remark that illusion, but there is still much work to resolve the crisis to be real pres conference...

For the Western politicians detailed communication with the press after the talks of such significance level is a mandatory part of the process.

Meanwhile, the explanation is simple: the leaders of the two major Western countries do not believe that the documents signed in Minsk will work. And therefore - tried to minimize their involvement in its presentation. Why to be associated with unsuccessful negotiation process, even if the parties put their signatures?

Sign number two - insulting remark of Vladimir Putin. "We believe that the surrounded in Debaltseve 6-8 thousand security forces will lay down their arms," - said the Russian president. After that, personally, I have no doubt that he sincerely wants to dip Minsk-2 contract. Because to say this after the worst hours of the negotiation process, but still be well aware fragility of the compromise ...

With the true intentions of Russia the third feature is linked. Why did Putin request a three-day postponement of the implementation of the agreements? Why during the whole night from the territory of Russia in the Donbass transferred 50 tanks, "Tornados" and "Grads"? And for what purpose the Kremlin began a large-scale exercises of missile forces in the 12 regions of the country?

Why Putin arrived in Minsk? The answer is simple: sanctions

We can, of course, answer all these questions with the pro-Kremlin point of view, it is - peace enforcement with a position of strength, but still with a considerable share of bluffing, which is quite typical for Putin. But another option is much more realistic: the Russian president did not initially believe in long truce. And plans ahead the continuation of the war.

You may ask: why did he come to Minsk? The answer is simple: the sanctions. More precisely, the delay in the new stage of their introduction. This is for now. And then - we'll see. Putin has already realized that even he, with his ego, cannot plan the development of the conflict in a fairly long-term prospect.

The fourth sign that Minsk-2 agreement is doomed to failure - body language of Poroshenko immediately after the signing. Yes, a lot can be attributed to wild fatigue, but primarily on the face of the Ukrainian president we saw a disappointment. The Head of State is aware that the signed document is unprofitable for Ukraine, and he put his signature only to not be in the eyes of the world the culprit derail of the peace process. But, like Putin, he will be monitoring any breach of contract on the part of Russia. And without any sadness he will meet the downfall of the hated contract.

Finally, the fifth sign of concerns ... well, of course, the United States of America. Consider even the fact that no peace agreement of such format can be possible without the full participation of the United States.

Most importantly, we should understand that the inertia of the war is great; too many people are interested in its continuation. And to stop the conflict, supporters of the peace will need to use the maximum available resources.

There is a feeling that all the parties of the conflict have not reached this maximum accumulation yet.