Historian Gritsak: The film "Crimea. The Road to the Homeland" is an address to Russia aimed to prove that its armour is strong and its tanks are fast 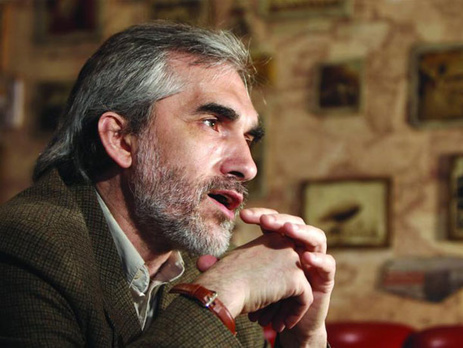 Gritsak: We think that Putin tries to restore the USSR while he needs the whole world
Photo: expres.ua

In the opinion of the Ukrainian historian and professor at Ivan Franko National University of Lviv Yaroslav Gritsak, the Russian President Vladimir Putin believes that he does not conquer Ukraine but saves it and that Ukrainians must be grateful to him.

The film "Crimea. The Road to the Homeland" is another address of president Putin to Russia aimed to prove that everything is in order in the country. This opinion was expressed by the Ukrainian historian Yaroslav Gritsak in the comment to the GORDON .

"I think that the film "Crimea. The Road to the Homeland" is rather intended for the Russian audience than for the international one. It is another address to Russia aimed to prove that everything is in order, that the armour is strong and the tanks are fast and that we will make it hot for everybody. It is a hooligan challenge for Europe. We do not care about others, we will pursue the international policy that we will choose because there is nobody among you who can oppose us. It is what Putin says in the film. It is a very daring geopolitical statement. Hitler could not have made such a film because Hitler was much more cautious. Hitler did not speak his mind as Putin does. The question is whether we can hear what he is saying," Gritsak reported.

According to the historian, the main message of this film is that, in Putin’s opinion, Russia is becoming a new superpower.

"The main message is that Russia is a new superpower. And not simply superpower, but superpower that will terrorize the world, and the Crimea is just the beginning in this game. Several years later, I suppose, we will be able to watch a film about liberation of Europe from homosexual plague or from neoliberalism. Putin speaks very explicitly that it is the matter of preserving traditional values and that he is against the threats of the modern world, meaning the West. In this respect, Putin is a fundamentalist that puts Europe onto the same level as the Islamic fundamentalism. It is the reaction of the failure civilizations – Islamic and Orthodox – to their inability to get modernized. They also want to be rich and strong as the West, but they are not able to do it. It is like in Aesop’s fable about the fox and the grapes. The fox failed to reach the bunch of grapes and it says that the grapes are sour even if it is sweet," he said.

While the world thinks that Putin tries to restore the USSR, he himself needs the whole world, Gritsak supposes.

"It is a great threat to the world, and the Crimea is just a trifle in comparison to it. This point of view is consistently advocated by Russian experts, in particular Illarionov and the famous writer Erofeyev. They claim that we fail to hear what Putin says. We think that Putin tries to restore the Russian Empire or the Soviet Union whereas he needs the whole world, and the world built following his rules," Gritsak reported.

According to the historian, Putin thinks that he is liberating and not conquering Ukraine.

"Putin was ready to use nuclear weapon when seizing the Crimea. How can a country that got rid of the nuclear weapon react to it? Putin’s logic is simple – he does not conquer Ukraine but liberates it. The Russian president suggests that Ukrainians will thank him for this one day. Therefore, nationalists are used as a threat he saves everybody from. He claims that he is saving the world from the bad West as it is the American CIS that gives rise, trains and finances all Nazi and nationalists. According to Illarionov, Putin seriously declares that there is nobody he can talk to after Mahatma Gandhi’s death. And it is not perversion or insanity, as Merkel would have put it. No, he is sane, he has a different mind, and he is yet to demonstrate it to us," Gritsak said.