Korotich: In the USA they always stared from the elections of judges and sheriffs and the president was elected at the very end. Because the law is first , everybody is equal before it. 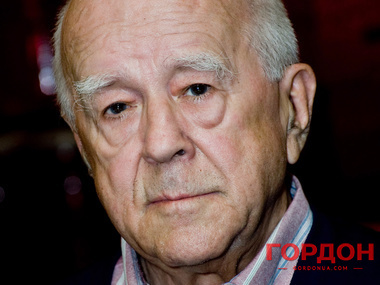 Vitalii Korotich: Europe is a domination of laws over emotions rather than “people’s lustration”. Deputies are not loved all over the world, but vapulation is not a method for decision of political problems.
Photo: Felix Posenstein / Gordonua.com

Well-known Ukrainian poet and publicist Vitalii Korotich told the edition GORDON what he thinks about the incident with Nestor Shufrich, about “people’s lustration” and about why striving to Europe one cannot decide problems by means of Maidan.

Ukrainian poet, writer, publicist Vitalii Korotich is called one of the foremen of Perestroika. In 1986 when in the USSR irreversible changes toward democracy began, Korotich took the lead of the magazine “Ogonek”, publications in which had a profound effect on public mind and political life of the Soviet Union. For his editorial activities American magazine World Press Review conferred Vitalii Alekseevich the title “Foreign editor of the year” – the title annually conferred for courage in the penetrating into freedom and responsibility of the press, in assertion of human right and for true journalism.

For a long time Korotich has been living in Moscow, at the beginning of the 90s during seven years he taught at the Boston University of the USA. All this time he kept up following events in the native Ukraine. Edition GORDON contacted the writer in order to inquiry him about the war in Donbass, “people’s lustration” and upcoming elections to the Verkhovna Rada.

- It is such time now that I have to ask: aren’t you afraid to give an interview to the Ukrainian journalist?

- I am Ukrainian journalist too though living in Moscow. In the response I can ask you: aren’t you afraid to have an interview with me?

- Judging by baiting Andrei Makarevich and Diana Arbenina, it is not safety for the citizens of Russia even neutrally speak about Ukraine...

- I completely calm set forth what I think. It is senseless to guess how it will be perceived by others, otherwise 50 years ago I shouldn’t start my career at all.

- Then what do you think about knocking down of the monument to Lenin in Kharkov: is this a vandalism or expression of people’s righteous anger?

in the Eastern Europe after the breakup of the USSR, namely legally. And the monument to Lenin should be demolished legally that is to make decision at the level of the City Council, after which automobiles of public utility service would come and dismount the monument. I absolutely don’t think Moscow to be the model of democracy but even here in the Park of Culture and Rest there is the entire territory of casted down sculptures where all demounted monuments are

gathered: beginning from Gorky to Dzerzhinsky, Lenin and Stalin. In general demolition of Lenin in Kharkov is right but one should act as enlightened people but not by influence of people’s anger. Since it is not football where fans arrange inflight between them, and in the point of fact the change of the fate of the whole country.

"Striving to Europe one cannot decide all problems – from fence to the government – only by means of Maidan''.

– Is “people’s lustration” of Nestor Shufrich in Odessa also right but illegal?

– Many in Ukraine are elated: “Oh, Shufrich’s face is beaten!” And what is further? Deputies are not loved all over the world, but vapulation is not a method for decision of political problems. I am unkind to “people’s lustration”. One should as soon as possible to pack in absolutely emotional level of problem decision. It is impermissible that serious calls with which Ukraine faced now are decided at the level of hysterics. In such way in 1917 all aristocracy, then all clerisy was wiped out, and in several decades the reversed hysterics started in the USSR, everybody began screaming: “On my God, what have we done!” Now Ukraine received bills for actions of the previous authority. Not only Yanukovych but also all four presidents. But today’s hysterical, non-delayed correction of the made in the past mistakes, this “people’s lustration” won’t lead to anything good. In the world there are enough receipts of crowd excitement for achievement of own results, but striving to Europe one cannot decide all problems – from fence to the government – only by means of Maidan.

- And what if there is nothing else under the condition of the authority’s inactivity as to shove public person who lies like a gas-meter to waste bin or to beat a face?

- Pray God that situation with Nestor Shufrich and other Ukrainian politicians who came within “people’s lustration” really was expression of the people’s anger but not someone’s political order. I will repeat one more time: one should go away from emotional plane, otherwise there will be serious provocations. For some time past at the emotional level somebody invades warehouses of weapons or goes as volunteers to Donbass in order to fight against mythic “Ukrainian fascists”. There should be clear legal limitation and any emotions can be justification for beating and “people’s lustration” even of very unpleasant persons. I consider myself to be patriot of Ukraine but I don’t like nationalists. I absolutely agree with the statement of the Nobel Prize Laureate Albert Schweitzer: “Nationalism is patriotism is the state of hysterics”.

- Doesn’t it seem to you that Shufrich to a large extent encouraged people’s anger regularly broadcasting in the political talk-shows about the Party of Regions that so-called protected Maidan from Yanukovych’s lawlessness and now makes everything possible for peace in Donbass?

– I am acquainted with Nestor Shufrich, we even took part in one TV program - “Shuster. LIVE” where we had amusing dialogue. TV program was in live transmission on May 9. Nestor was all at sea: something like how one can scold Stalin on Victory Day? I answered and this got aired: “I had one acquaintance who all her life endured that she is called a whore but when she was called in such way on March 8, she felt aggrieved very much”. There is Zhirinovsky in Russia – absolute provocateur. He regularly calls on: “Beat! Poison!” and so on. But as soon as these screams start endangering his personal safety Zhirinovsky immediately begins apologizing, something like I am a good guy, I just took wrong pills, so my brains fogged.

"One can even 100 times “lustrate” Shufrich but situation won’t change until the laws work''.

- I cannot recollect that Ukrainian politicians as a matter of principle apologized for anything.

- You paid attention that Ukraine on its way of formation or strengthening of independence always begins with the elections of the president, parliament and so on.

- For example in the USA always stared from the elections of judges and sheriffs and the president was elected at the very end. Because the law is first , everybody is equal before it, and then the head of the country who rigorously obeys the law. It is what is necessary to understand now in Ukraine. While during 23 years of independence nobody made lustration, while the first President of Ukraine was the ex-secretary of the Central Committee of the Communist Party of Ukraine Leonid Kravchuk, let’s at least now without hysterics and waste bins start out the process exceptionally within the frame of the right margin. But now hysteric women are heard the best. It always was so. In 1989 the dissident and human right defender Andrei Sakharov was put-upon by the Supreme Council of the USSR. Andrei Dmitrievich was not able to outcry Soviet zhirinovskies. Unless there is created true independent judicial system in Ukraine till then there will be neither efficient authority nor real independence.

- Have you been on the March of Peace in Moscow?

- No, that time I was in Kiev. In the years of Perestroika I participated in such number of marches, organized such number of meetings that I understand full well: to gather demonstration is much easier that to start up democratic process. People feel protected only when laws work properly. In France both Jacques Chirac and Nicolas Sarkozy came under the judicial proceeding, in Germany - Helmut Kohl. And it doesn’t matter that they were the Presidents or clerks, everybody must obey the laws. Unless it is so, one can even 100 times “lustrate” Shufrich and other politicians but situation won’t change.

''Big business, oligarchs who decide what is profitable for them stand for Russian-Ukrainian conflict''.

- Both Perestroika’s meetings for democracy and publicity, and “Ogonek” that began publishing secret materials that changed consciousness of the Soviet inhabitants... Don’t you think that all this was in vain if 84% of Russians support Putin and dream to back to the USSR?

- About what 84% are you talking about, for God’s sake! Social surveys working in hysterical regime may draw even 120% of Putin’s rating. Today a vast number of solicitation materials are poured out to people’s heads, alternative sources of information in the todays Russia are almost absent. That’s why when the auntie roaring into camera: they don’t sell bread in Kiev shops to those who speak Russian is shown on TV, the first emotional reaction of inhabitants is pity and anger to Ukraine. People are besotted, brainwashed by propaganda. By the way, friends from Israel write me, they watch everything – both Russian and Ukrainian television. They write that go mad: the same event is covered diametrically oppositely. We too much sank in the ocean of emotions. I am afraid that upcoming parliament elections in Ukraine will be also at the emotional level, they again will lay about themselves and block the tribune instead of real and efficient lawmaking.

- Vitalii Alekseevich, what or who can stop Putin?

- Only public opinion – Russian, Ukrainian, worldwide. There is no escape for the Russian Federation and Ukraine from each other: we were, are and will be neighbors. But public opinion that was created and regulated not by hysterical voices but exceptionally by law – no, nobody is interested in this. Big business, oligarchs who decide what is profitable for them and what is not stand for the Russian- Ukrainian conflict. In the end peace in Donbass will be pacified but years will spend for this. I repeat one more time: there must be pressure of law rather than oligarchs and business interests. What is Europe and civilized society? First of all it is respect for law and many think that Europe is a big supermarket. No, it is dominance of laws over the emotions, rather than “people’s lustration”.