Lyashko: I do not rule out that Gontareva, deliberately or not, may work for Putin’s plan of destabilizing Ukraine 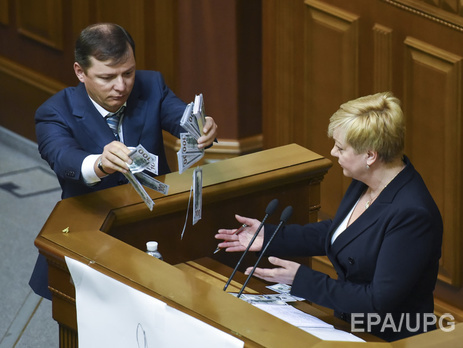 The Chairman of the Radical Party faction Oleg Lyashko considers that the management of the National Bank not only weakens the rate of the national currency but also destroys the Ukrainian economy by their actions.

Not only the regulator but also the government and the president who appoints heads of the National Bank are responsible for the situation in the foreign currency market. The People’s Deputy Oleg Lyashko said it in the comment to the GORDON .

"When people say that the decrease in the hryvnia rate is due to economic reasons, it is not all the truth. The truth partially consists in the fact that there are three rates, and colossal money is earned by playing with them. Another part of the truth is that hundreds of millions hryvnias were given and not returned as re-financing for commercial banks," the people’s deputy noted.

In his opinion, talks about the foreign currency deficiency in Ukraine are not true.

"More than $50 billion have been sold over recent months in Ukraine, so it is wrong to say that there are no dollars in Ukraine. There are dollars, but we are facing a catastrophic downfall of the hryvnia because of the shameful monetary policy of the National Bank. Furthermore, the NBU not only decreases the hryvnia rate, but also destroys the economy. Under the pretext of fighting inflation, the National Bank has increased the refinancing rate to 20%, and it means that loans for small and medium business may rise to at least 35–40% at commercial banks. Nobody will be able to borrow such expensive resources, and it means destruction of the economy," Lyashko considers

All five factions of the coalition support Gontareva’s immediate dismissal

"We had a meeting of the coalition yesterday and raised this question again, and all factions supported our position. We demand that President Poroshenko immediately make a proposal to the Verkhovna Rada on Gontareva’s dismissal from the position of the Head of the National Bank due to loss of trust. She lost trust of the market participants and trust of the Verkhovna Rada. All five factions of the coalition support her immediate dismissal. Hopefully, this decision will be adopted next Monday," the people’s deputy pointed out.

In Oleg Lyashko’s opinion, the actions of the National Bank of Ukraine foster the Russian plan of destabilizing Ukraine.

"I do not rule out that Gontareva, deliberately or nor, may work for the implementation of Putin’s plan of destabilizing Ukraine. It is absolutely obvious that Putin will take advantage of social and economic problems of our state to urge people to revolt. It is clear that any unrest and social disturbance in Ukraine play into his hands today," Lyashko stated.

"We must join all public efforts and direct them to liberate our native land from occupants. When we distract the necessary forces to bring order inside the country instead of using them at the frontline, it also weakens the front in the east of the country. Therefore, we demand the President should dismiss Gontareva, in particular because she assists Putin with her actions," the deputy added.