Volunteer Mochanov: Presidential Administration is a "haunted" place, people there get used to fawning with time 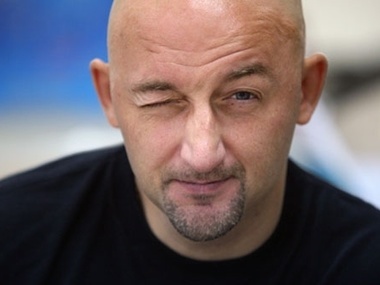 Mochanov: Nobody tries to talk to the nation
Photo: hate.trust.ua

The Automaidan activist, Ukrainian racing driver, automobile journalist and volunteer Alexey Mochanov shared his vision regarding the Ministry of Internal Affairs, the National Security and Defense Council and the Presidential Administration in an exclusive interview to the GORDON .

It is impossible to work at the Presidential Administration, people get used to flattery and toadying there, considers the volunteer, journalist and Automaidan activist Alexey Mochanov.

"There are a lot of carpets, columns, monograms, and cherubs at the Presidential Administration, like the House with Chimaeras. Frankly speaking, I have no idea where the real chimeras are – there or in the Presidential Administration. It is a "haunted" place, and people get used to fawning there because the majority of them do not do anything effective. Therefore, they have to toady all the time and shout, "Boss, you are congenial!" And a person in power gets used to it. It is one of the reasons, why the last U.S. president who served three terms in a row was Roosevelt and only because it was war time. They understand that a person becomes contused to death after eight years in power. No matter how talented you are – Super-Clinton, Super-Reagan – please, bid farewell after eight years. Not even nine years because this system changes the person at the genetic level," he said.

According to Mochanov, the Presidential Administration is Mezhyhirya in miniature.

"As under Kuchma, everything is covered with leaf gold: wreaths, monograms, carved chairs, nutwood tables. It is Mezhyhirya in miniature. It is impossible to focus there because there are twenty-five billion details there. I say, "Pyotr Alekseevich, it would be a pleasure if I could talk to you in a simple office with gray wallpaper, white ceiling, and a carpet," the volunteer reported.

The volunteer considers that the Presidential Administration does not perform its functions properly.

"Have you heard anything about Svyatoslav Tsegolko after he became the press secretary? Nothing, right? He was a very good journalist, he took sharp interviews with Yanukovych, with Timoshenko, and oppositionists, and now he is suddenly loaded with large amount of work. He is not a simple press secretary, he is a whole service.

There is no use in this service if it has a lot of tasks and we do not see any results, we do not hear the president, and he occasionally talks to journalists like with Bandar-logs. He talked to people in Ukrprominvest and in Roshen. People know that he can talk. The difference is that the staff that elected him is the whole country rather than a small Roshen company," Mochanov declared.

In his opinion, appointment of Zguladze to the governmental position is a mistake.

"I am terribly disappointed that a Georgian was invited, and Avakov has Caucasian origins, too. At least, meetings with her and Arsen Borisovich’s participation will not be boring. It pays well to love Ukraine from the Internet or from abroad. We have not found anyone from among two million people of the Ukrainian Canadian diaspora who would be ready to come from Quebec or Ottawa and start solving our problems here. Therefore it upsets me that a Georgian was appointed, and not a Ukrainian. I do not think that we do not have people who would be capable of doing the same. We hope for a miracle, and this time we have a Georgian miracle," the volunteer stated.

One of problems that may be faced during reforms in the Ministry of Internal Affairs, according to Mochanov, is dismissal of employees who are really able to do something.

I do not know if Eka Zguladze will manage to do something or not, I hope that she will

"Georgia is a smaller country with different specificity. I remember the situation in the Ministry of Internal Affairs of Georgia when its leaders were replaced. But when our people came there and asked something, for example, about the traffic police, "And how do you do this and this?" the new managers who replace those "old-timers" called someone from the "old-timers" with a folder and asked how they did this and this. It is important that they should not throw out people who are really able to do something, and that they should not to turn into Bolsheviks who dismissed everybody, including Criminal Investigation Department and Secret Services, and then tried to build all this anew. I do not know whether Eka Zguladze will manage to do something or not, I hope that she will, but we cannot recruit policemen and someone else from Georgia," he reported.

According to the volunteer, Colonel General Mikhail Koval should have been appointed Head of the National Security and Defense Council instead of Oleksandr Turchinov.

"I am much more concerned with today's appointment of Turchinov the Head of the National Security and Defense Council (SNBO). A person is appointed who ceded the Crimea, who was in power when the war began, who was brought up to the top of the power as if with a whirlwind. Either Poroshenko gives a signal that he does not care what people think of him, and it will end tragically for Poroshenko, too. Before death, everyone who is not needed anymore go to a high-ranking agency that is absolutely senseless and useless. I think that under the circumstances, if this structure does not function, Colonel General Mikhail Koval should have been appointed; he was Minister of Defense under Turchinov, by the way, and who was dismissed for bullet-proof vests and Geletey was appointed. Then the SNBO would be headed by a general, and not by no one knows whom. I think that society will burst out on hearing this news," Mochanov said.

The journalist considers that the main problem of the government and the president is their unwillingness to communicate with people.

"More than thirty thousand people are involved in the ATO, including ten thousand people who constantly on the front line. But we have neither the status of ATO participant, nor the status of military operations participant. Nobody communicates with the country, nobody tries to explain why we need the Donetsk airport, why we stay there – within the Minsk accords or simply because it is a case of diamond cut diamond. Nobody tries to talk to the country why they do not introduce the martial law, but leave the anti-terrorist operation. I do not exclude that the ATO is probably better than the martial law because there are a number of restrictions concerning the budget, curfews and a lot of other things. Maybe, we should not be scared with all this now, but the biggest problem of the government is that they do not communicate with the people at all. I told the president about it during our Sunday meeting," Mochanov said.

He expressed the opinion that Ukraine has to remain indivisible despite everything.

"I know for 300% that 10 days before the Minsk meeting that took place on September 5, almost all of our army scattered, and everything broke or tore. In the period from August 25 when Yevhen Pikus, my friend and a frontier guard, was killed to September 5, when meetings in Minsk took place, if there had been no negotiations with anyone, these fighters could have reached Warsaw, at least Shagini and Krakovets. That is why we needed the Minsk accords, it seems now that this truce works, it should be concluded on conditions that would not be humiliating for us. I am sure that it should be without recognition of the annexation of the Crimea, "LNR" and "DNR", some diplomatic ways of resolution should be found. These new arrangements should not confirm that Ukraine has lost three regions: The Autonomous Republic of Crimea, and Donetsk and Lugansk regions. After all, we have to defend indivisibility of Ukraine," the activist said.

According to Mochanov, any arrangements with Russia are useless.

"The world does not understand what genie it lets out of the bottle. There were arrangements after war that America was called the world gendarme – they had strong fleet, strong and fast response forces. There was the Soviet Union, there was the Iron Curtain, but there were some arrangements, and they were respected. And it turns out today that Russia felt force as a drunk teenager at the table and took away the Crimea. But the day after tomorrow it can remember anything: about Alaska, and about Finland – they will tell that Helsinki was just a fortress that protected St. Petersburg from the North," he reported.

"How to calm down this dude in a Russian shirt? Russia took away the Crimea, Donbass and Lugansk region from Ukraine, and it can reach anywhere soon. Guys in Russia believe that everything will be all right on the whole because Putin has been president for 14 years, and it is almost twice as much as it is possible in America. This mess began after Putin’s eight years in power," the volunteer stated.