Nemtsov: Putin does not Lose Hope to Disjoint Ukraine and is Awaiting a New Crisis 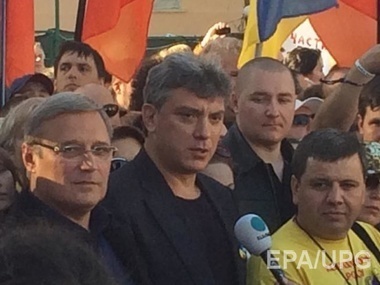 "There will be six to seven regions with a population of 10 to 12 million people instead of what Ukraine is now, and Russia will thrive", the LDPR (Liberal Democratic Party of Russia) leader Vladimir Zhirinovsky mentioned in his interview for the German Bild. The Russian oppositionist Boris Nemtsov commented on this statement for the GORDON web-site.

"On the one hand, Zhirinovsky’s words should definitely be treated like a clown’s ones. On the other hand, he is rather a court jester than an ordinary clown. It means that he voices thoughts and directions received in the Kremlin; he does not express any of his own ideas. It is clear that Putin does not lose hope to disjoint Ukraine and is awaiting a new crisis to do this," said Nemtsov.

The politician suggests that if Ukrainians lived in Moscow or in Russia they would regard the Peace March as the Russian opposition does. "Indeed, this is emergence of a powerful anti-war movement in Russia. This is a rejuvenated peace party being born. A military party has been dominating in Russia so far. On Sunday, we demonstrated that the peace party is much stronger, nobler and franker than the war party. It is a tremendous success," Nemtsov believes.

Ukraine demands that Interpol should put Zhirinovsky on the wanted list.

Vladimir Zhirinovsky was shortlisted on the EU’s supplementary blacklist. He has been forbidden to enter the EU, and his assets have been frozen.