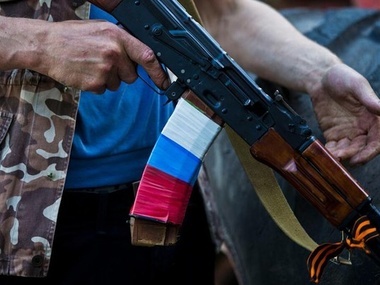 In ‘Novorossia hit list’  among ‘accused’ there are people of all sorts, including activists of the Kyiv Maidan and
Photo: koira23.livejournal.com

Ukrainian journalists and public activists who were put on the ‘Novorossia trial list’ told the GORDON edition about their attitude to their new ‘status’. This issue led to a conversation about the war of Russia against Ukraine and about whether it will be possible to fight back the Donbass region.

The other day, a web-site of the so-called "Novorossia" published a list of Ukrainians accused of "carrying out Nazi and anti-humane activities, contributing to the spreading of the criminal ideas of Nazism, participating in humiliations against civilians of former Ukraine, killing women, elderly people and children, journalists and doctors."

People of all sorts were among ‘the accused’, including activists of the Kyiv Maidan and Euromaidan in Ukrainian cities, members of pro-Ukrainian public organizations, volunteers, and journalists.

And who is to judge? ''Five prosecutors of the people’s tribunal" representing the terroristic organizations DNR and LNR whose insurgents equip firing points in residential houses, torture captives in torture chambers, shoot people dead for Ukrainian flags and Ukrainian language.

Having published profiles of the accused with their home addresses, phone numbers and details about their close relatives, “the prosecutors of the people’s tribunal” appeal to the readers to "administer justice" hoping that every patriot of Novorossia will regard it as his duty to track down and deliver to whatever place some of those who “plunged the territory of former Ukraine in the abyss of misery and sorrow and caused enormous harm to their own nation.”

‘The accused’ who have nothing to do with Donbass are rather ironical about these threats. However, they are quite real for those who have remained in the occupied territories or have their relatives there. There are cases when a neighbor informed against people who openly express their civic position in an attempt to pay off old scores, or it was just a passer-by who overhears an unwary conversation.

A journalist of the GORDON edition called some of the people from the above list in order to find out how serious they are about their status of ‘the accused of Novorossia’.

– I can only be glad that I am among decent people on this list. It is a great honor for me that the Russian terrorists and the paranoiac Putin’s regime consider me their enemy. It means that the result of the Censor.NET edition’s efforts causes these vampires a lot of trouble.

– I have been on the hit lists for a long time – I get messages in the social networks, people threaten to hang or shoot me. But I regard it as virtual informational threats made up to heat the emotions at the background of what is happening in Eastern Ukraine. And what is happening there is a very concrete Russian military intervention. No DNR or LNR tribunals have any legal power. I think that it will not be a long time that they will control the Donbass territories.

Artem Furmaniuk, journalist of Radio Svoboda and Pro-test edition, used to live in Donetsk before occupation

– Terrorists are going to bring people from this list before the court. I found information on their web-sites that 400 people are secretly working in different Ukrainian regions searching for pro-Ukrainian activists. But I am used to it – I even found my name in the lists of the Donetsk Euromaidan participants. I think that this list is an initiative of snitches thus proving their loyalty to ‘Novorossia’. There are individual lists at every DNR checkpoint, people are taken off the buses and cars and inspected; you’d better not get into such checks even if it turns out that the person is not guilty. Nobody thinks much there – these are not even NKDD troikas (‘triplets’) that were at least pretending to follow some rules. I would like to believe that we will fight back the Donbass region sooner or later.

There are three ways to stop unjustified sacrifices: either vote correctly at the parliamentary elections, or gather another bloody Maidan, or simply to yield Donbass though this is the most shameful way out. They turned their back on this region long ago, it is becoming evident now. It was yet in April that I wrote for Radio Svoboda that Akhmetov took Donbass away from Ukraine  and soon after Poroshenko became President, I wrote that it was all being done by his consent. We do not call war a war, we call it the ATO (anti-terroristic operation); migrants from Donbass have no status. There are migrants but there is no status, it means that there is no definite protection program for these people who have left everything in Donbass, though it is impossible to live there.

– Only Ukrainian laws exist for me, and I am not going to recognize terroristic organizations with their ‘justice’. They will not be in power for long, Ukraine will be a unitary state. However, I certainly have a feeling of lost home. As soon as I found out about the adoption of the law on the special status of the occupied territories, I immediately expressed my view: we cannot surrender the region and betray people, especially those who were standing on Maidan for liberation of Ukraine and Luhansk region from Yanukovych’s yoke. We should not yield Donbass and we must get the Crimea back – otherwise we can yield all of Ukraine.

Valentin Torba, journalist of the Den newspaper, until recently remained in Luhansk writing reports from the occupied city

– The fact of ‘the accused list’ does not surprise me. We returned to 1937 when every snitcher could decide your fate, and people were deprived of any rights or protection. They check documents against their lists at the checkpoints, they can go on Facebook and check your profile. It is another chance for them to get a ‘star’, so they are doing their best. Most of my journalist colleagues left Luhansk, though some of them did not manage it and got into casemates. All the rest started working for the quasi-republic of LNR. These are people who turned out to crave for cheap fame, and now they have a chance to become press secretaries of ‘ministers’ or even ‘LNR ministers’. Ii is not improbable that some of them were simply forced to cooperate. The situation in the region is extremely oppressive. It is not even Transnistria, it is the Middle Ages, a black hole where people have no points of support, no normal subsistence, no security guarantees. One goes to a shop to buy some bread and does not know if he will come back home.

Unfortunately, it is clear that this region will suffer for many years and there will be no prospects for a long time. The problem is that stabilization in Ukraine is not good for Russia – it will rather benefit from Donbass’ remaining ‘an abscess’ infecting all of Ukraine.

I will present documentaries I shot before war in the Kyiv Cinema House at 6.30 p.m. on October 7. They are called “Ukrainian Luhansk region. Lessons for Kyiv". Kyivans should watch them. I have been in Kyiv for three weeks, I am watching people, and they seem to be in a sort of hibernation. And here in Podol, I meet people who called Ukrainians fascists. These are people involved in provocations, people who invented the myth of a threat impending from Banderists, and they are now stand for parliamentary elections.

Meanwhile, genocide of the Ukrainian people continues in Donbass. Ukrainians are annihilated in their own country – for example, you can lose your life if you start speaking Ukrainian in Luhansk. But this topic does not interest anybody anymore.

People there bury dozens nameless soldiers, many remain unburied. We have lost track of casualties, but this is out of agenda, too – there are more interesting issues. However, while one is being lustrated in a trash bin, and this is broadcast on all channels, another one is captivity, being tortured, cut off fingers and broken legs. The former got out of the trash bin, washed himself and went on to become a deputy, but it was filmed by all cameras, people discuss him chewing the informational gum, while people are being murdered, and we do not even count them or announce their names. It is a social trait that speak volumes. Trash bins, beating of Shufrych, "leninopad" (toppling of Lenin monuments) – this all is a show distracting from the essence. Whereas people can topple monuments to the communist leader, communists will still stand for elections to the Verkhovna Rada, they will use this story with the monument as another plug.

It is likely that this flywheel is spun from the Kremlin, though Russia may not realize what will be  in the end. We have lost much and will probably lose even more, but if Ukraine explodes, the Kremlin may as well lose its star.

The other day, my friend sent me a photo from the USA: there is a poster in the New-York underground advertising the film called “Syria, Ukraine, who is next? Photos and videos from the countries involved in the civil war”. Just think of this phrase… We do not have a civil war. Yes, asocial locals were used at the beginning of this war, but this is not a civil war, this is a new format of Russian intervention. The topic of civil war is good for the Kremlin: say, Ukrainians fight against Ukrainians; let us help them. However, this poster from the New-York underground so far away from Ukraine is a warning signal. Lies are coming from everywhere, and we can just make a fool of ourselves.