Slava Rabinovich: Ukrainians are pushing hryvnia down themselves when they run to exchange offices to buy dollars 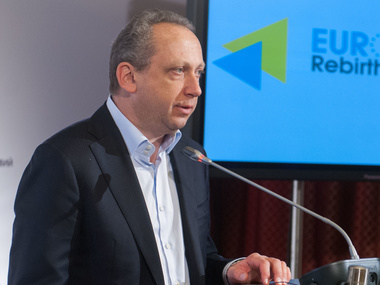 Slava Rabinovich: Ukrainian economy was oriented at Russia, and not at the West, and it is playing an evil role now
Photo: uacrisis.org

The economic situation must be improved by the Ukrainians themselves together with international financial organizations, considers the Russian financier Slava Rabinovich.

Ukrainians are pushing hryvnia down themselves, the Russian financier Slava Rabinovich said in the comment to the GORDON .

"The most powerful factors that push the hryvnia down are the Ukrainians themselves because they run to exchange offices and banks to buy foreign currency, and it continues bringing the hryvnia lower and lower. It is an absolutely natural behaviour of people – they want to keep their savings, if any. The hryvnia will reach its bottom when the economic situation will start improving, and the economic situation must be improved by the Ukrainians themselves together with international financial organizations. For this purpose, there must be a clear financial plan that should be implemented.

"The bottom can be reached, not artificially, but as soon as the financial panic stops and it becomes clear why it should stop," he said.

In Rabinovich’s opinion, there is no end to the downfall of any currency.

"There is no limit to the downfall of any currency even in theory. It is true for the hryvnia, for the rouble, and for any other currency. Any currency may fall infinitely in relation to other currencies or assets. It is in the nature of any currency. It may be said regarding the hryvnia that the Ukrainian economy was oriented to Russia and not to the West before, and it is playing an evil role now," the economist said.

Ukraine, Russia and the previous Ukrainian leaders are all partly to blame for the economic situation, Rabinovich believes.

"For the time being, there is no precise economic plan or economic program. I was in Ukraine in October and asked, "Have you got an economic program? Where can one read it? How will it be implemented? Who will implement it? What period of time does it cover? What concrete steps and reforms does it suggest?" I did not get an answer to any single question. And very little has been done. It cannot be even considered essential," the expert summed up.