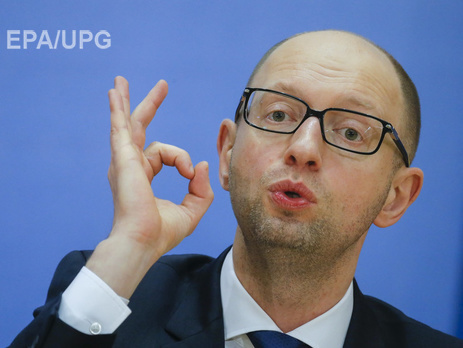 Arseniy Yatsenyuk: We are prepared for the most radical, tough and effective reforms in the country as the present-day situation requires. The mission will be completed
Photo: EPA

The GORDON has drawn up a rating of promises given by the Prime Minister Arseniy Yatsenyuk and both acting and dismissed members of the government throughout the previous year and has traced back how effectively they have been fulfilled.

There was one prime minister, Arseniy Yatsenyuk, and two governments last year. The first government was in office from February 27 to December 2, 2014, then it was replaced by the second one that will have worked for 100 days one of these days.

Some ministers have remained in power for more than a year, others, such as the Minister of Defence, had to be replaced four times.

The GORDON has selected the most high-sounding promises of former and current members of the Cabinet of Ministers for this year. We list them in the chronological order.

1. Tenyukh promised that Ukraine will not withdraw its troops from the Crimea after the illegitimate referendum

Military men in the Crimea will carry out the laws and charters of the Armed Forces of Ukraine (AFU). They are representatives of the AFU and the Ukrainian power so they will not go anywhere from the Crimea because it is our land.

Status: unfulfilled. After the illegitimate referendum in the Crimea on March, 16 and Russian occupation of the Crimea, Kiev withdrew part of its troops (around 4 thousand people) and equipment to the mainland Ukraine. According to the acting speaker of the AFU General Staff Vladislav Seleznev, around 14 thousand soldiers did not want to leave the peninsula. At present, the Crimea is de jure Ukrainian, but is de facto part of Russia.

2. Avakov promised to deal with separatists in Donbass within two days

I think that this crisis will be resolved within 48 hours. The anti-terroris operation in three regions has not been cancelled, and we can carry out all the pre-planned actions at any moment.

Status: unfulfilled. In early April last year, pro-Russian demonstrators seized several administrative buildings in Kharkov, Donetsk, and Lugansk. On April 7, the building of Kharkov Regional State Administration was liberated from the occupants, whereas the security officials in Lugansk and Donetsk did not venture a storm. Subsequently, the separatists managed to take whole cities and regions in Donbass under their control. The anti-terrorist operation in this region is still in progress.

3. Lubkivsky promised that Ukraine will secede from the CIS

The CIS turned out a helpless organization. We stick to our vision and our approach, and I confirm the Secretary of the Council for National Security and Defence Andrey Parubiy’s words that we are considering the issue of Ukraine’s seceding from the CIS.

Status: unfulfilled. Formally, Ukraine is not a CIS member, but has had the status of an observer in this organization since 1991, and has been part of the free trade area within the commonwealth since 2011. Many politicians have made declarations about the need to cease Ukraine’s participation in all CIS bodies for the recent year, but no concrete steps have been taken. The Speaker of the Verkhovna Rada Vladimir Groysman promised in January that this issue will be considered during the current parliamentary session.

I am convinced that Ukraine will win. And believe me: the victory parade is bound to take place in the Ukrainian Sevastopol.

Status: unfulfilled. Last year, the Ukrainian army headed by Geletey managed to fight back several towns in Donbass, but the forces of the anti-terrorist operation had to retreat in August as a result of invasion of Russian regular troops, they suffered considerable losses at some positions, for example, in Ilovaysk. Fighting for the Crimea was out of the question then.

5. Yatsenyuk promised to introduce sanctions against Russian companies and citizens that support separatists

Ukraine will introduce sanctions against every physical person who has a Russian passport and who supports terrorists and separatists in Ukraine.

Status: in progress. Throughout the previous year, Yatsenyuk regularly promised to impose sanctions against Russian companies and citizens that support separatists and terrorists in Donbass. Last September, the government declared about their approval of the relevant sanctions and their forwarding for approval to the Council of National Security and Defence. The Security Council informed later that the sanctions will be applied, and the Minister of Economics Aivaras Abromavicius specified that they are already in force against ‘160 business entities in the Russian Federation’ as of February. It is still unknown if it is true: a month has passed, but the list of people and companies who were subject to restrictions has not been published yet. In the opinion of the Ukrainian diplomat and former Consul General of Ukraine in Istanbul Bogdan Yaremenko, these sanctions have not been applied so far.

6. Yatsenyuk promised to carry out tough and effective reforms

People expect changes from everyone. And we are ready for the most radical, tough and effective reforms in the country as the present-day situation requires. The mission will be completed.

Status: in progress. According to Yatsenyuk, the process of reforms in Ukraine has already been launched, but people will be able to realize changes only some time later. "The next government and the next prime minister will benefit from these reforms," the prime minister said. In particular, the reforms he mentioned included reduction of public expenses and state apparatus, refusal from intermediaries in the energy market, establishment of market tariffs, increase in gas reverse supplies from Ukraine and reduction of its consumption, and decrease in the number of taxes. In the meantime, some experts (for example, the ex-Minister of Economics of Ukraine Vladimir Lanovoy) say that these are not reforms but positive changes.

7. Stets promised that there would be no censorship in Ukraine

I have experience as a journalist and a producer of Channel 5 and as the Chairman of the Committee for the Freedom of Speech and Information under Yanukovych. There was not a hint at censorship while I was in office. I will not engage in it now. I am not a suicide.

Status: requires continuous monitoring. Creation of the Ministry of Informational Policy of Ukraine caused an outbreak of criticism in the journalist community. The new structure was sarcastically called the Ministry of Truth or the MinStets. Many were anxious that the Ministry may introduce censorship in Ukraine. Fortunately, the worst fears did not come true. In January when there was a scandal because of the broadcasting of programs with Russian stars who support aggression against Ukraine on Ukrainian channels, Stets supported the TV channels. He declared that they had not violated the applicable law but promised to draft a bill that would forbid showing personae non grata on TV (except for the news programs).

8. Kvitashvili promised a medical "mini-revolution" in Ukraine in 2015

We need new legislation on health care rather than a provision in the Constitution. Then we will enable hospital to earn money themselves. It will be a mini-revolution, and it is bound to take place in 2015.

Status: in progress. Kvitashvili stated that he will forward a legislative package to the Verkhovna Rada in March; these laws will be necessary for reforming the system of public health care. "Then we will be able to open the system for different kinds of financing, we will enable hospitals to work and earn money. And the public funds will be spent on financing programs, i.e. on purchasing services rather than on the payment of bed days," the minister said. The ministry further plans to introduce insurance medicine. According to Kvitashvili’s forecast, it may be realized next year.

9. Abromavicius promised to bring Ukraine to 50th position in the rating of the ease of  doing business

We will develop business by facilitating it. We now rank 96th in the Doing Business rating, and we want to rank 50th in two years.

Status: in progress. Doing Business is an annual research of the World Bank evaluating the ease of conducting business in 189 countries. In late January, Yatsenyuk declared that Ukraine improved its position in the rating ranking 96th according to the preliminary information as of 2015. It ranked 112th in 2014. According to the experts of the World Bank, Ukraine has great potential due to having a third of the world’s black soil deposits, an advantageous geographic position, a rather big internal market, and a fairly developed infrastructure and industrial facilities.

10. Yaresko promised that the economic situation in Ukraine will stabilize after obtaining the IMF loan

This IMF loan will be an anchor that will stabilize the Ukrainian economy, and, in particular, the situation in the foreign currency market.

Status: in progress. The meeting of the IMF Board of Directors at which financial assistance to Ukraine will be discussed is planned for March 11. The Cabinet of Ministers expects the first tranche to amount to around $10 billion and that Ukraine will receive it until the end of March. According to Yaresko, the government will use it to replenish the National Bank reserves and to pay external liabilities. We will see very soon whether it will stabilize the situation in Ukraine.