Volunteer Kasyanov: Putin can only be stopped by military force now. It is impossible to talk to him any more 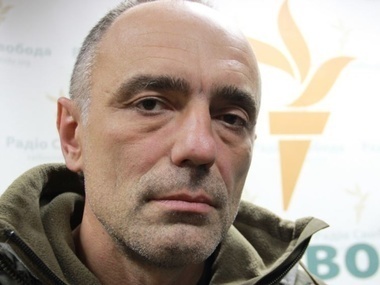 Kasyanov: Putin can only be stopped by the whole world
Photo: Radio Svoboda

Any result of the negotiations in Minsk will not satisfy either party, stated the volunteer of the Army SOS community and blogger Yury Kasyanov.

The Russian President Vladimir Putin can only be stopped by military force in the conflict in the east of Ukraine, the volunteer of the Army SOS community and blogger Yury Kasyanov said in the comment to the GORDON .

"We know how we should act following the example of the countries who were subject to aggression and had to defend their independence and sovereignty during World War II. All countries spent all their resources for the war, these countries appointed really talented people to head the army, and not those who are close to the president or a certain political or other force. These countries joined the efforts of their partners to fight against the enemies. Putin can only be stopped by the whole world, by military force. It is impossible to talk to him any more," Kasyanov reported.

According to him, the West must recognize direct aggression of Russia against Ukraine.

"At the present stage, Ukraine can only delay the offensive because our army is not so strong and our resources are not limitless. Russia has much more resources and a much stronger army in this war. It should be understood. Therefore, only joint efforts of the whole world can stop Putin’s aggression. It is obvious that arms procurement must take place, though it is not a panacea. It is important that both our political leaders and our western partners USA should recognize that it is a direct aggression against Ukraine, and appropriate actions should be taken," the volunteer stated.

Kasyanov considers that there is a full-fledged war in Ukraine.

"All this shelling and offensive means that there is a full-fledged war that few people speak about. Our leaders do not speak that, in fact, a full-fledged war has begun with the application of all forces and means available to both parties. The enemy hits our ammunition depots that are deep in the country and uses aviation. Our death toll has increased sharply, and so did the enemy’s. It is especially related to the fact that military actions not just intensified, but, first of all, the enemy is trying to gain local victories at the front. Not just to seize some settlements, but to destroy part of our troops to dictate conditions to the weakened Ukraine. It can be linked to the negotiations or not. The negotiations are in progress now and it is clear that Putin has more advantage as a stronger party," he said.

According to the volunteer, any result of the negotiations in Minsk will not satisfy either party.

"Negotiations have never been the ultimate aim for our enemy and they will never be. Any result of these negotiations that can be achieved will not satisfy either party. Putin still needs the entire Ukraine. If he gets some dividends, and, as a result, DNR and LNR borders will be moved and they will seize more territory and probably stop for a while, sanctions will be cancelled, and that is what he wants. But it will only be an interim result, he will want more then," Kasyanov summed up.