Who and why is returning to Donbass? 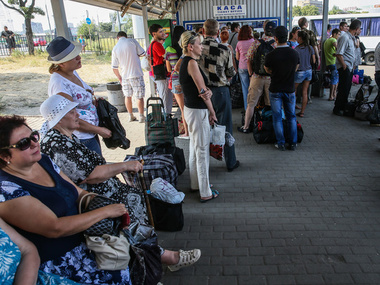 The settlers who had earlier fled the regions covered by military operations, massively are returning to the east. Someone could not settle in, someone is afraid that separatists will take their empty houses, someone hopes that the war is over and hometowns will have relatively peaceful life. What is the risk for those who return to the occupied territories? Who are they and what can they expect from relocation again? Internet edition GORDON has asked experts

Egor FIRSOV, People’s deputy from the party UDAR, Head of the Office of the party in the Donetsk region:

People return home in the hope of a truce, despite the fact that the fighting is not completely stopped. Here they have their houses, apartments, business, relatives, friends. This is their homeland.

All those who left want to return. At least the majority. Despite the fact that the fighting, in fact, has not completely stopped in some parts of the Donetsk region, for example, near the airport. Even my friends returned there after the adoption of laws on the status of the territories in the hope of a truce, in the hope that the troops depart. According to them, shoot much less.

If earlier in Donetsk APCs and tanks drove now at least the heavy equipment left and there is no such horror as used to be. It is the homeland, here they have their houses, apartments, business, relatives, friends, that’s why people want to go home.

Donetsk - a million citizen city, there lived 950,000. Two weeks ago, there remained not more than 300,000, and according to my information, there are actually 200 thousand. Some went to Kiev, some stayed in the Donetsk region, cities such as Mariupol, Krasnoarmeisk, others went to Lvov, Dnepropetrovsk. Some pro-Russian part of the population, it was smaller, but nevertheless, went either to the Crimea, because the cost of housing is cheaper there, or to Russia.

If at the end of August one could drive in the central street of Donetsk and see literally 2-3 people and a maximum of 2 cars, now at traffic lights formed micro-jams. Provided that in August the city was similar to Chernobyl, now at least some life resumed. I even know that the militants stopped squeezing out cars and property. Somehow chaos and lawlessness that reigned at the beginning vanished a bit.

Gas and water are supplied almost everywhere in Luhansk region, power is being restored, 98% of schools are in operation. Winter is coming soon and it is natural that people are returning.

People are returning home because winter is coming soon. Some territories are now controlled by the Ukrainian government, some are safer to live in. Even if it is not safe, people return home because they do not want to live as if they were adopted, and children need to go to school.

Some schools started working from 1 September, some from 15th, some from 25th, some from 1 October. 98% of schools in the region are now in operation. Gas is supplied almost everywhere. Some areas are still without light, it is where power lines cross the terrorists’ territories. They have already shot dead several employees of Oblenergo (regional power distribution company) because they supplied power and restored communications. However, electricity is bypassed. There is water. People go back to their houses. It is natural.

People are returning, but we cannot keep record of them. They are returning from Russian territories adjacent to the so-called Luhansk People’s Republic (LPR). There are no border posts, units or customs there. Who can possibly control them? Generally, Ukrainian citizens’ movement shall not be controlled. They are checked against explosives, weapons, terrorists, etc. However, there is a law on free place of residence and free movement in the territory of Ukraine, and nobody has abolished it. These are all Ukrainian citizens – here and there. Around 1000 people from the LPR territories come to the pension fund of Severodonetsk every day, let alone other towns, such as Rubizhne, Lysychansk, district centers. Banks are not operating there (in the territory of LPR. — GORDON), people come to us to withdraw money in addition to receiving pensions and social benefits. Food is 2-3 times more expensive there than in Severodonetsk. People come here and sweep the shelves clear. We keep asking owners of the supermarkets to deliver more. We will now organize a fair in Severodonetsk every weekend so that people could bring products from agricultural areas. 64.9% of the population still remain in the LPR-controlled territories. They need to eat. It means that they come and people bring food. We have no customs here and we do not prevent anyone from buying. They are Ukrainian citizens just as we are; they only happen to live in temporarily occupied territories.