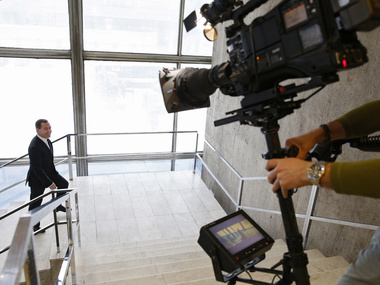 Cuts are used for the sake of dynamics and in order not to slow down the action in cinema, Maidan is cut out from Medvedev’s article as such
Photo: EPA

Ukrainian Maidan is what must not be named for the Russian Prime Minister Dmitry Medvedev. The leaders of the neighboring country are obsessed with maidanophobia. This conclusion was drawn by the columnist of the GORDON Yevheni Kuzmenko after he studied the article by the Prime Minister of the Russian Federation "Russia and Ukraine: Living by New Rules".

When you read Dmitry Medvedev's article about the Russian-Ukrainian relations, you are moved with intonations rather than arguments. The little wise psychiatrist sadly speaks about the neighbour: she got out of hand, she became weak and depressed, I feel sorry to look at her! She used to come and ask for salt, allowed me to measure intracranial pressure, tap on the knees with a hammer, pinch at the bottom. And now she found someone else, and I have always meant well…

Thanks to Dmitry Anatolyevich for locking especially violent patients for the period of his sad and expressly humane monologue. Though he used to allow these patients to peep into the nervous neigbour’s windows with concealed sadism. One of them fancied to see crucified boys, another one sees tortured Russian bullfinches in his dreams; a third one keeps shouting: "Ashes! Ashes! There will be radioactive ashes here soon!"

Maidan as something that did not take place

Enough comparisons; let's glance at the text of the article once again. We should pay tribute to the author: it is written in a proper manner. It tells us about old brotherly traditions, how Ukraine went crazy and began to long for Europe. And about atrocities of Banderites, arrogance of the western leaders, long-suffering of the Kremlin and why this long-suffering was over…

As people often write today: a close-knit group of manipulators and propagandists worked on the article. There are excerpts from Glazyev old notes here and there – how Europe will ruin everyone and everything, but together with Russia …

However, I was attracted by what the article lacks rather than by what it contains.

While reading you notice semantic gaps in the text. Here, there, everywhere. As though there is a block against one phenomenon in the brain of the most rational Dmitry Anatolyevich. He can remember about it, but he cannot mention it aloud. Otherwise it may come to the place where you live and terrible things will happen!

Dmitry Medvedev managed to do it.

"The expiring year will be remembered in the Ukrainian history as one of the hardest and the most tragic ones," the Russian Prime Minister announces mournfully. "President Yanukovych negotiated association with the EU, promising "the European choice" to the country but trying to continue a game with Russia at the same time. Finally, after the economic analysis of all risks and possible consequences and having realized that there are no guarantees of serious and prompt injections from the West, he slowed down process of association with the EU…"

One wants to say here, "Here, he will say it now!" But Dmitry Anatolyevich puts further in the text, "On February 22, there was violent seizure of power in Kiev… Further actions of the Ukrainian leaders, including military ones, led the country to the economic abyss it faces now."

Whoops! This method is called "cut" in "A Man from the Boulevard des Capuchines". Do you remember? Two people are kissing – and then they have a baby …

But whereas cuts are used for the sake of dynamics and in order not to slow down the action in cinema, Maidan is cut out from Medvedev’s article as such. A gap is made in public consciousness. As if hundreds of thousands of protesters had not gone out in the streets of the capital in the frost. As if people had not been killed without any trials. As if Yanukovych had run away under the aegis of Putin and Medvedev from the Ebola virus rather than from people's wrath.

Dmitry Anatolyevich repeats this focus again and again. Actually, it is how the article begins, "A year ago, at the end of autumn 2013, when the crisis began in Ukraine, nobody could imagine what consequences will this "bitter November" have for our neighbors. A social split that involved even families. An economic recession. A surge of radicalism, up to frank defying with Nazi symbols. Flows of refugees to adjacent countries. Military actions against compatriots on the home land. As a result, thousands of casualties, including civilians."

Another motion of scissors – and there is no Maidan between "bitter November" (I wonder what may be called the events taking place in Medvedev's home country now – "black winter"?) and the last month of 2014. "Social split", "surge in radicalism" – yes, but we’d better not go into the subject. Maidan is what must not be named. And if one names it, the oblivion spell should be applied: "Obliviate!"

Joanne Rowling would be happy.

Generally, we can diagnose the author by the results of the article. No, we could guess even before that the leaders of the Russian Federation are obsessed with maidanophobia, that punishment of Bolotnaya Square prisoners, house arrest of Udaltsov and Navalny, the anti-utopian farce with Pussy Riot and Mokhnatkin is because Nordic St. Petersburg residents were frightened at the first Maidan in 2004. But to such extent…

No, of course, the pretend that they do not believe that all this was sincere and not for money. But in the heart…

One phrase gives Dmitry Anatolyevich away. He informs with bitter reproach closer to the conclusion, "Many people in Ukraine have revolutionary euphoria now. It seems that it is enough to throw centuries of common past to the scrap-heap of history, and everything will be started from scratch. Life will become more comfortable and successful. But this new beginning will be stained. It will be stained with blood. Ukrainian society is already paying for the illusions that are generously distributed by the ruling elite who dream of the European passports in the pockets. We hear about victims of these illusions every day".

That is it. Not an uncontested need of reforms, but "revolutionary euphoria". Not a conscious painful breakup with a half-insane neighbor, but "payment for illusions". Dmitry Anatolyevich and his senior friend Vladimir are sure: people cannot wish anything independently; and if it is seized with "revolutionary euphoria", this nonsense must be burnt out with red-hot iron and propaganda lobotomy.

There is and can be no Maidan in Russia, do you understand? These are illusions. The falling price for oil, galloping dollar, increase in prices – it is a mirage imposed by Americans and Eurogays. Russia is strong as never before. As Vladimir Vladimirovich has recently said, "External pressure upon Russia has given a powerful impulse to scientific development"…

No, guys, we must run away from these hallucinations. Run as far as possible. Yes, it will be hard, we have been on this "brotherly needle" for so many years. But it is better to live in rental apartments than remain with a drug addict who considers himself Pope in the Third Rome both with a dose and without it.

… And we will see whether Maidan is impossible in Russia. Illusion, you say? Well-well.