Activist Dovhan: Our enemies benefit from ‘public lustration’, and we must seek a way out within the legal framework

“Beating of Nestor Shufrych in Odessa is further evidence for the zombified Russians that fascism is thriving in Ukraine”, thinks Ukrainian activist and public deputy candidate Iryna Dovhan. 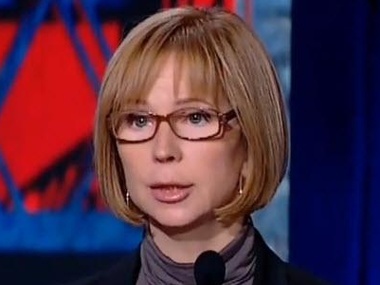 Dovhan: I also wanted to beat Shufrych, but I didn’t do that. We cannot all fight with each other!
Screenshot from "Shuster Live"

"Nowadays, all patriots must pull themselves together and check their exuberant emotions", declared the Ukrainian activist Iryna Dovhan in her comments for GORDON.

"Emotional tension is very high now – we have war in the country. However, this only benefits our enemies. There are other ways to struggle against the likes of the traitor deputy Nestor Shufrych. And we must seek these ways within the legal framework. This is my firm position", Dovhan stated.

In her opinion, the incident in Odessa is an illustration for the Russian mass media proving to the zombified Russians that fascism is thriving in Ukraine. "But we Ukrainians are a highly spiritual nation, look at our literature and art. This is the view we must demonstrate to the whole world", Dovhan suggests.

According to Dovhan, people should now take a more prudent and reasonable approach to every such action. "I understand those people who were involved in beating Shufrych. At some point, I also felt like beating him when I was listening to his tedious speeches at Savik Shuster’s show. Nevertheless, I didn’t do that, I pulled myself together. We cannot all fight with each other! Let us not give way to animal instincts, not gloat over Shufrych’s being all battered and bleeding. I was also beaten by common people in Donetsk only because it was written that I was an accomplice of punishers", said the activist.

What will be the results of ‘public lustration’?

"In spite of all overwhelming emotions, the big number of people could have gathered together and expressed their anger in a different way. There is commonly used brilliant green and eggs. But not beating. Frankly speaking, I first felt an emotional uplift when I watched the video; it was like music to my ears. But then I checked my emotions and turned on reason", Dovhan reported.

Nestor Shufrych arrived in Odessa on 30 September to take part in a meeting with the local Oppositional block. Activists of the Right Sector, Self-Defense, Automaidan and Euromaidan learnt about it and came to the Regional State Administration building. An argument began, then growing into a fight. Shufrych was diagnosed with a closed craniocerebral injury.