Anton Gerashchenko: All the statements made by "Inter" TV channel about the possible censorship in Ukraine is a complete nonsense 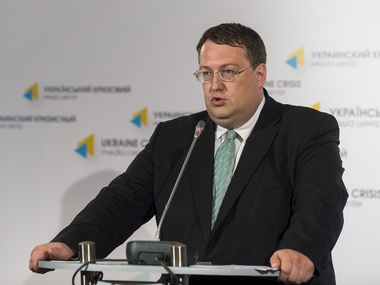 Gerashchenko: In Britain during the war fighting against Hitler they stopped to show the films in theaters glorifying the great Fuhrer
Photo: uacrisis.org

The owners of the TV channels have to show who really owns them - a ski instructor or a Russian resident, said MP Anton Gerashchenko.

"Inter" TV Channel is by far the leader in the series broadcast, praising the Russian special forces - the MP said in a comment to "Gordon".

"All the statements made by the " Inter " TV channel about the possible censorship in Ukraine is a complete nonsense. Currently it is "Inter" TV channel who is the leader in broadcasting glorifying Russian special forces and Russian security services TV series. We have to ask ourselves the question - could it be the same, for example, in Britain during the war, that at the same time fighting against Hitler there were films in cinemas glorifying the great Fuhrer? "- Gerashchenko said.

According to him, the Verkhovna Rada, which is now offered to the consideration of a bill to ban participation in the ownership of TV channels of non-residents, wants to show exactly who owns the TV channels.

"No one talks about censorship even close. By these laws we want to make sure that the owners of television channels show not only their minority and majority shareholders, but also their owners in the offshores. Let them show who really owns them - a ski instructor or Russian resident, "- said the MP.

Gerashchenko said that the "Narodny Front" will refuse to vote on other issues, if this bill is not on the agenda.

"Today it is planned to vote for the inclusion of this bill on the agenda. If it is not included in the agenda, then our splinter group reserves the right not to participate in voting for the other questions, because we believe that today it is crucial for Ukraine to win the information war, "- said Gerashchenko.