Due to the shortage of dollars and euro in the Russian exchange offices, there is an unexpected demand for hryvnia 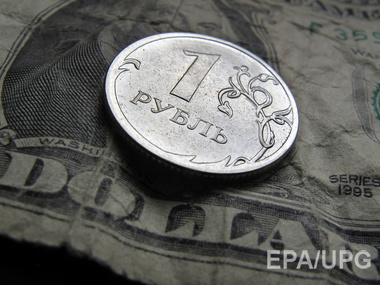 The author of the GORDON, satirist writer, translator and journalist Maryan Belenky decided to act as a correspondent of the Interfuck news agency and inform the readers about several important initiatives of the Russian government aimed to stabilize the rouble exchange rate.

Russia plans to refuse national currency following the example of Ecuador and officially introduce U.S. dollars. On request of the Russian government, the USA prints special Russian dollars with the portrait of Putin in an imperial gown and a crown, and the building of Lubyanka with the restored monument to F.E. Dzerzhinsky. Russians tried to pay in roubles, but the USA said that they will perform the order for dollars only. For real ones.

Another project. Vodka will become Russia’s main currency. The national currency vodkorubl will be freely exchanged for vodka at the specified rate in the banks. New money will have an inscription "Secured by all alcohol reserves of the Russian Federation". Each bank will set up guarded tanks with alcohol. Besides, banks will be connected to alcohol producers by vodka pipelines. All types of alcohol will be recalculated against a liter of alcohol at the rates established by the Ministry of Finance.

The Ministry of Finance of the Russian Federation allowed placing advertisement on banknotes due to the economic crisis. Everyone can order any number of notes of any face value with a portrait of the dear mother-in-law or a dog or advertisement of one’s business, etc. The order will be paid in a convertible currency. The hryvnia will do, too. The Ministry of Finance considers that this measure will attract more currency to the state budget. Notes with business advertisement will be very convenient for paying bribes and kickbacks. The bribe taker will remember who he received money from.

Due to the shortage of dollars and euro in the Russian exchange offices, there is an unexpected demand for hryvnia. Russian banks urgently buy hryvnias in Ukraine for a foreign currency. For this reason, the National Bank of Ukraine urgently prints hryvnias with an inscription "Putin h...ilo".