Borislav Bereza: on Shufrich's place I would hide somewhere and do not provoke people 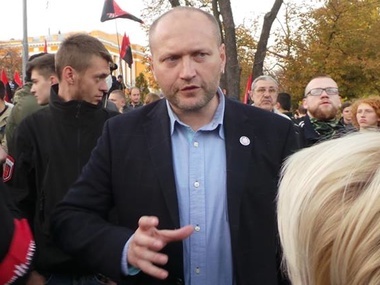 The representative of "The right sector" Borislav Bereza considers that negative attitude of people to Nestor Shufrich was collected for years and was now splashed out outside.

The representative of "The right sector" Borislav Bereza in the comment declared to the GORDON  that Nestor Shufrich got off rather light in Nikolaev where people threw eggs at him.

"Nestor Ivanovich finished his own scenario and now he works according to the national scenario. Considering that the people are negative to Nestor Ivanovich extremely, I think that after eggs something heavier could be thrown. On Nestor Ivanovich's place I would not provoke people much, calm down and hide", said Bereza.

In his opinion, this situation is not surprising because for many years Shufrich was one of members of the power team.

"What happened to Shufrich was a national will, and "Pravy sector" is a part of the people, as well as Nestor Ivanovich. But the difference is that he is from the part of the people which oppressed all others for 23 years. And now those who was oppressed, began to act. There is time to scatter stones, and there is time also to collect them. Shufrich now actively collects what he has collect what he has sown", – added Bereza.

On October 17 in Nikolaev activists of "Pravy sector" and other organizations threw eggs to the People's Deputy Nestor Shufrich.