Chornovil: Shokin has been working in prosecution for a long time. He knows well whose arms to twist to make things work 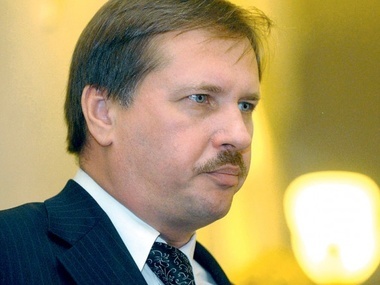 According to the former people’s deputy and political expert Taras Chornovil, the arrest of the former chairmen of the Party of Regions faction Alexander Yefremov – is just the first step in a series of high-profile "imprisonments" of former high-ranking officials.

High-profile criminal cases against former officials of the Yanukovych regime were not investigated for two reasons: weakness of the Prosecutor General’s Office itself and resistance of courts. Now that there is a new head at the Prosecutor General’s Office of Ukraine, intensification of the campaign against a number of ex-officials of the former president can be expected. The political expert Taras Chornovil stated it in his comment to the GORDON .

"I think that a series of "imprisonments" has been launched. Everything was prepared for this. There are two problems, one of them no longer exists, but the second one remains. The first problem was moral, psychological, and political condition of the Prosecutor General’s Office, the second one is Ukrainian courts. There have been some changes in the first part. Yarema was too weak a figure to change anything in the General Prosecutor's Office. Moreover, he did not want to get involved in any conflicts, to gain enemies, he did not want to take any abrupt actions. This is typical of him, in particular in relation to people like Yefremov and other iconic figures from the past," Chornovil claimed.

"Yarema never broke anything in the General Prosecutor's Office. He did not understand how decisions are made there, he could not understand what strings to pull to make the existing mechanisms in the Prosecutor General's Office work because there is blind resistance there. It is an old structure that was completely purged under Yanukovych. Some of the normal adequate staff still remain there, but these people were not able to influence the essence of decision-making," the expert pointed out.

Viktor Shokin has wide experience of working in the prosecution, therefore he did not need much time to find ways to make the General Prosecutor’s Office work effectively.

"Only the Prosecutor General, with his tough decision, could make the system work and start purging it. After Shokin’s appointment, the situation is changing. Shokin has a prosecutor's personality. He has been working in the prosecutor's office since Ukraine gained independence, he has been Deputy Prosecutor General since 2002, he was able to demonstrate stability and integrity. He managed to resign in a timely manner when he was required unacceptable things. In any case, he perfectly knows all the mechanisms of the General Prosecutor's Office. Shokin really understands, who to press upon to make things work. He will break the resistance and he has already begun to break it, we already see it," Chornovil noted.

However, according to the expert, the new prosecutor general will have to overcome resistance of corrupted judges.

"There is a second part of the problem that Yarema often referred to and put it as follows, "Why start doing anything if any initiative of prosecuting the criminals will be choked and stopped by our courts?" This problem persists with Shokin’s appointment. I fear very much that the most honest Pechersky Court may still decide to reject the prosecutor's office petition to arrest Yefremov," Chornovil considers.

In the end, everything comes to the initiated struggle against the court mafia

"However, I think that there are ways to make sure that Yefremov will not escape. There are parallel charges on which he can be detained and then do what Shokin started doing. One of the first questions he raises is that judges must be subject to criminal prosecution. He started doing it and I think that he will promote this process. If he settles everything with the High Council of Justice, some of the judges can end up in prison very quickly. And it will be a serious demonstrative sign. The main problem now is that there is a large hunting for people involved in crimes of Yanukovych’s times, in crimes concerning separatism, and everything comes to the initiated struggle against the court mafia in the end. I can see Shokin’s first decisions and I think that he has also chosen this direction. I think that a serious campaign has already begun. The question is whether it will be realized in full force," the former people’s deputy said.

Taras Chornovil doubts that Rinat Akhmetov or his associates will follow Yefremov. It will rather be someone from the prominent media figures from the Party of Regions like Elena Bondarenko, the expert thinks.

"Out of purely political reasons, I assume who will not be next. I do not think that it will be people from Akhmetov’s group. At some point they managed to keep away from the political life. This is obvious. They moved away from political activity and did not stand for the elections to the Verkhovna Rada. Under certain conditions, it enables them to save their business and avoid the press of repressions. I think that Akhmetov’s people are balancing on the edge, but it is unlikely that they will go next. It may affect those who did harm who is stupid enough not to take clever steps. Relatively speaking, it is Lena Bondarenko. There are enough reasons to bring her to criminal responsibility for separatism and other activities. This may be people of this level from among former deputies" Chornovil believes.