Chumak: Ukraine is not the center of the universe, but it is a tiny center of Europe, surrounded by pretty serious geopolitical problems

According to the Deputy Victor Chumak, international credits may soon turn into a specific "Marshall Plan" for Ukraine. 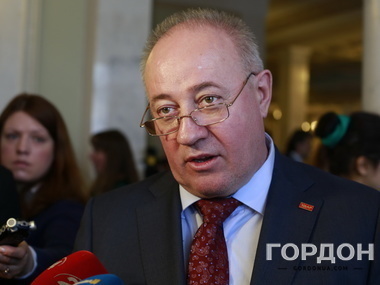 Chumak: IMF will revise the possibilities of financing and consider its increase.
Photo: Aleksandr Khomenko / Gordonua.com

Various international financial structures have already allocated so many credits to Ukraine that refusal of further financing will be simply inprofitable for them. Such opinion in the comment to the “Gordon” was expressed by the Deputy of Petro Poroshenko Block Victor Chumak.

"I think, for international structures the question will be not to whether give money to Ukraine, but how to make us satisfy the conditions of the creditors. We have already been given so much money that there are no further grounds not to give it any more. On the part of international financial structures it would be stupid to refuse us and bring the client, that has been credited a lot so far, to default", – the deputy emphasized.

In his opinion, the International Monetary Fund (IMF) will revise the possibilities of financing and consider its increase.

"Do not really listen to Andrey Illarionov when he speaks about default. Moreover, I think that now the IMF will revise the possibilities of financing and consider its increase. For example, yesterday Ukraine was offered an additional credit of €1,5 billion (The European Commission intends to allocate €1,8 billion to Ukraine –"Gordon")", the politician summarized.

Thus Chumak noted that the conditions of granting the credits are most likely to become tougher.

"These conditions can somehow be carried out. And we can do nothing to escape from it. The first condition is to launch the work of the National anti-corruption bureau. Today the first meeting of the committee that will choose the head of this department will just take place", – the deputy reported.

According to Chumak, launching of anti-corruption bureau by the end of January was one of the conditions of the IMF.