Chumak: Property tax can be reviewed after the first quarter, when they see how it will work 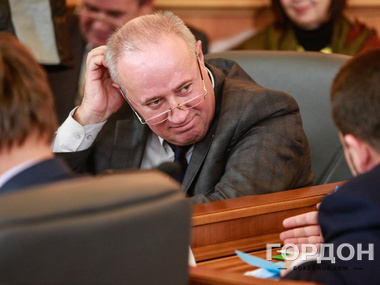 Chumak thinks that the budget should have been enacted till New Year
Photo: Alexandr Khomenko / Gordonua.com

People’s Deputy from the Block Poroshenko Viktor Chumak said that the budget must be adopted before the New Year, as the delay in approval could hardly improve the main financial document of the country.

According to the People's Deputy Viktor Chumak, they managed to find the balance between the distribution of fiscal pressure on ordinary people and wealthy population in taken yesterday in the Verkhovna Rada amendments to the tax legislation. About this Chumak said in a comment to "Gordon".

"The tax changes were adopted on the distribution of rental income on contracts of joint oil and gas production. The taxes on expensive cars, on passive incomes were raised. These are not taxes for ordinary people. These taxes are for people who have a certain wealth. I think that it was possible to save the balance, to make a greater pressure not only on the oligarchs, but also on wealthy people, the rich, who will assume a greater burden than people who are less provided, "– Chumak considers.

According to him, the new real estate tax is intended to fill local budgets and should not harm vulnerable groups.

"Property tax – is one of the major taxes that feed the local government, it is one of the most effective taxes around the world. To talk about decentralization,  about enhancing the role of local government, about the financial autonomy of local communities without the introduction of this tax would be really wrong. Maybe be this technique is not very correct, but at the same time those apartments to 60 square meters  are the housing for single people that are not taxed and they do not harm vulnerable groups, "– Chumak added.

"I proposed a different method of calculating property tax. It is recorded in a housing code that it is 13.65 meters per person and 20 meters for each family member. We could made it all as a non-taxable minimum and then collect the taxes from all that is above this norm. Furthermore, every second and third apartment was supposed to be taxed several times over. Then it would also launch the housing market. People would get rid of excess real estate to avoid paying extra taxes, "– said the MP.

According to him, the conditions of the real estate tax may be revised after the first quarter of 2015, when it becomes clear whether it is effective or not.

"I agree that not everything is correct here. Perhaps when we revise the budget, we'll deal with that tax, because yesterday we had such an agreement, that it is necessary to return to the revision, after seing how it works after the first quarter," – said Chumak .

According to Chumak’s opinion the enacted amendments to the budget and tax laws are not perfect, but they had to be approve because the delay would complicate the process of obtaining credit from the IMF.

"Yesterday I was not happy with this budget, but let's be honest, if today we hadn’t accepted it, and returned to vote in a month or two, it wouldn’t have been better. There is no money. If today we hadn’t voted for this budget, the IMF meeting on Jan. 20 wouldn’t take place. All those who voted are not happy with what we have. But generally speaking, that night we managed to balance the load on the oligarchs and ordinary citizens. We spread it more or less correctly so that the rich could pay more. That night we managed to make a breakthrough motion for business. The unified social tax is 16.4% – this is a breakthrough. This procedure will help entrepreneurs to emerge from the shadows and legalize salaries, "– MP thinks.

"I know that in a month the budget will not become better. It will be even harder to find the money and to find the right decision in a month later. Therefore, choosing between bad and worse, we had to choose just bad," – added Viktor Chumak.