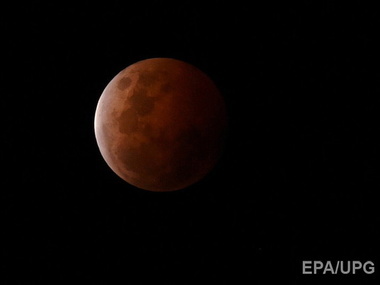 Moon during an eclipse is highlighted in purple color
Photo: EPA

— Conflicts with terrorists in the East persist. Three Ukrainian militants were killed in the ATO zone for the last day. Several shells hit the neighborhood of Donetsk railway station.

Geletei does not think he made a mistake by Ilovaisk

— The Ukrainian commanders did not make serious mistakes when planning the Ilovaisk operation, thinks the Defense Minister Valery Geletey. ‘There were some miscalculations but nor serious mistakes,’ stated the Minister.

Poroshenko appointed the head of the intelligence service

— Petr Poroshenko founded an intelligence committee by the President of Ukraine and appointed its head Igor Smeshko, former head of Security Service of Ukraine under Kuchma. The official has already declared that the new unit will coordinate activities of all intelligence structures of Ukraine. According to Poroshenko, Smeshko will in particular be responsible for public information.

— The Investigation Committee of the Russian Federation rejected the case of the Ukrainian director Oleg Sentsov arrested by the Federal Security Service who was beaten by Russian law enforcement officers referring to his “sadomasochistic inclinations”.

— People on the Earth could witness a lunar eclipse today. The shadow from our planet covered the Earth satellite completely this afternoon. In Kiev, the eclipse was at its peak at 1.25 p.m.

The rouble continues sinking to the bottom

— The Russian rouble set a new record of dropping in the currency market. Analysts of the established Moody’s agency forecast a collapse of the Russian rouble by 2016. Ingenious Russians decided to lay flowers to the rouble monument.