Doniy: The Party of Regions has brought up a generation of people who do not respect the Ukrainian language, culture and Ukraine as a state

The government that has declared their support of cultural initiatives has not allocated a single cent for volunteers’ cultural actions, considers the former People’s Deputy Oles Doniy. 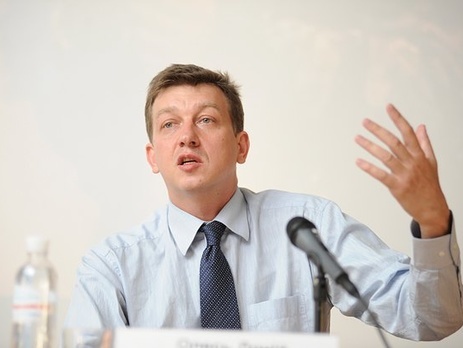 Doniy: Ukrainian culture has been promoted by idealists and romantics and not by the Ukrainian state for all this time
Photo: lb.ua

The Party of Regions has brought up a generation of people who do not respect the Ukrainian language, culture and Ukraine as a state, the deputy of the Verkhovna Rada of 7th convocation Oles Doniy said in the comment to the GORDON .

"Culture has been a weapon for 23 years of the existence of the Ukrainian state, but the point is that this is a double-edged weapon. Russia has used both informational and cultural aggression during the preparation of aggressive actions, thus promoting its product in the territory of Ukraine and gradually forcing out the Ukrainian language and culture from the territories controlled by their allies. In particular, the Party of Regions, with the help of its promoters such as Dmitry Tabachnik, has promoted a culture in which the Russian culture prevailed over the Ukrainian one that they considered to be lagging behind. Therefore a generation of people was brought up who do not respect the Ukrainian language, culture and Ukraine as a state. It made possible further occupation of the territory because Russian invaders found collaborationists among the local population that was brought up with the understanding that Ukrainian culture is second-rate while Russian culture is first-rate, so they should refuse from Ukraine in favour of Russia," the ex-people’s deputy reported.

According to Doniy, Ukrainian culture has been promoted by idealists and not by the state for all this time.

"Ukrainian culture has been promoted by idealists and romantics and not by the Ukrainian state for all this time. Despite high-sounding statements, the same thing continues now. We know that the president likes to make statements, but none of his previous promises has come true so far. As a co-chairman of the Public Council of the Ministry of Culture, I can assert that the state that has declared their support of cultural initiatives has not allocated a single cent on the cultural actions organized by volunteers and people in the east. We hold all our actions by ourselves, without any help from the state, often even in spite of the state. I can assert it as a co-chairman and founder of the well-advertised Public Council of the Ministry of Culture that is called the "weapon of culture," Doniy said.

Propositions as for the governmental support of cultural actions ended in a failure, Doniy reported.

"All our public propositions as for the support of some actions ended in a failure. Therefore we hold actions by ourselves. Last time, we held the Ukrainian Spring festival in Severodonetsk, Slavyansk, and Kramatorsk. We took Ukrainian poets and musicians there. The gratitude from the state was looting of people in the uniform near Severodonetsk who threatened us with machine guns, tried to take away our minibuses and extorted a bribe of UAH 2000 that the driver was forced to give under the barrel of machine guns. This is an example of the actions of the state. After we announced this information, the minivan of the "Last Barricade" was smashed up this night. It is reality between the words and the actions. We have not received a single cent on the "Last Barricade" festival from the state," he said.

The former people’s deputy believes that the cultural level of the nation must be raised.

"We understand that Ukrainian culture was shaped at different times. Shevchenko also wrote his prose in Russian. It does not mean that we will strike it out from Ukrainian culture. We understand that it is the reality. At the same time, we understand that, through the Russian language and culture, Russia is trying to promote its informational propaganda, so the problem is very difficult for Ukraine as a nation. On the one hand, we should not throw out everything that was created in Ukraine in different languages, not only in Ukrainian and Russian, but also in Tatar, Hungarian, Romanian – in different languages, we should absorb it in the Ukrainian culture and respect it all. On the other hand, we should raise the cultural level of the nation, and it means active support of learning the Ukrainian language," he stated.

In Doniy’s opinion, the more Russian-speaking regions there are in Ukraine, the higher chances that the Russian president will introduce his army there.

"A situation has been formed that the more Russian-speaking regions we have the higher the chances that Putin will say that he needs to introduce his troops there to protect the Russian-speaking population. Therefore, one of the elements of raising the Ukrainian-language culture is the all-Ukrainian network of free-of-charge language course organized by me in 2012; their motto is "Teach your friend to speak Ukrainian." Every Russian-speaking citizen who is willing to learn Ukrainian can do that. Russian-speaking people come there, and we help them learn Ukrainian. During the last trip of the Ukrainian Spring festival, we were joined by Andrey Kurkov who writes in Russian but is a Ukrainian writer. It is easier for him to write in Russian, but he is a Ukrainian patriot, a Ukrainian writer, and he has learned Ukrainian. It is easier for him to write in Russian, but he speaks to people in Ukrainian showing that he is working at his cultural level," Doniy summed up.