Electro-Shokin, or How to become Ukraine’s idol in several hours 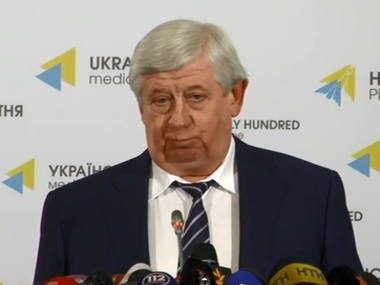 Viktor Shokin: I will not tell you the official who will be arrested next
Photo: Screenshot Ukraine Crisis Media Center / Youtube

It only took the new Prosecutor General of Ukraine Viktor Shokin to do his job to create a heroic halo – and he acquired a whole fan club by contrast with his predecessors. The columnist of the GORDON Yevhen Kuzmenko analysed why the arrest of the former member of the Party of Regions aroused such active support.

Real popularity does not come according to the general plan, it happens suddenly, over a few days. Or even over several hours.

History literally swarms with such examples, and the lucky transformation usually occurs to young people. The 24-year-old reporter Charles Dickens published his "Papers of the Pickwick Club", and soon he did not know how to escape exalted fans. The 24-year-old Alexander Abdulov became famous overnight after the premiere of "An Ordinary Miracle". His peer, the unheard-of Mike Oldfield launched the wonderful Tubular Bells album at the age of 20 and became the favourite of music lovers from all over the world.

The Prosecutor General Viktor Shokin became Ukraine’s idol in a few hours at the age of 63.

It only took him to detain the former leader of the parliamentary faction of the Party of Regions Alexander Yefremov who is not popular with anybody. The outburst of popular affection equalled the grey-haired wrinkled man of Soviet formation to the generally honoured Svyatoslav Vakarchuk.

I read dithyrambs of extreme power on my Facebook on this occasion. I will cite several of them.

"F..., there are sincere people in the prosecutor’s office! And in militia, and in tax service. One should only look around and pull these people to the surface!".

"Guys, I suggest we club together for protection and decent salary for Viktor Nikolayevich. His family and he should not be afraid of their future!".

"When he puts all the scum in prison, let Poroshenko appoint him the Minister of Defence – things will go better immediately".

"Finally, at least one state authority is headed by a person from Maidan!".

It is curious that the last statement belongs to a hardened sceptic. It was just two weeks ago that he told me that he considered going abroad with his wife and children. He motivated it as follows, "Little has changed. Those who made the Maidan went to the fornt or are engaged in voluntarz activities.The same swindlers and scoundrels are at the head. I have no time to wait until this country changes."

For Yefremov and three judges of the Pechersk court, Viktor Nikolayevich is credited with such confidence that other prosecutors general could never dream of

It turns out that there is enough time now? Only because Shokin detained Yefremov?

The newly formed Shokin’s fan club are told that this activity is timed to the anniversary of the shooting of the Heavenly Hundred; that Viktor Nikolayevich is not a courageous young prosecutor and reformer with sparkles in the eyes; that the degree and vector of his principles is defined by nobody but the president; that detention is not imprisonment yet; that Yefremov knew something when he remained in Ukraine and that one should wait for another six months at least.

It is all in vain. For Yefremov and three judges of the Pechersk court, Viktor Nikolayevich is credited with such confidence that other prosecutors general could not dream of. Even the outward resemblance with Viktor Pshonka is now interpreted in such a way that nearly twins can think and act in different ways!

There is such an impression that the country was passionately but unrequitedly waiting for reciprocity from Makhnitsky from the Svoboda party, then it believed in vain that the elegant Yarema would demonstrate himself appropriately. And it was so exhausted with this abstinence that it gave its heart to the first candidate that was capable of actions.

Can one understand people who see Commissar Cattani or Telman Gdlan and Ivanov at the same time in Viktor Shokin? Of course, one can. An average Ukrainian admires front heroes, but he cannot help noticing that there is a large gap between the heroes from the front and officials in the rear. Therefore, anyone who will try to bridge this gap will become a national hero.

Hence the myth about the incorruptible and fearless Shokin. The myth that was created in the first week of Viktor Ivanovich’s office only because he did his job. Or did at least something. At the background of sluggish Makhnitsky and Yarema even this "something" seems heroism.

This myth acquires new details. "You see, he is 63, he has nothing to lose, so he can do much," I was told by a young people’s deputy who was an advocate of "radical reforms and fresh blood in all authorities."

So it is. It turns out that it is best to charge pensioners who have nothing to lose with radical reforms and high-profile arrests? We can return Yevgeny Marchuk to the Security Service of Ukraine, and Vladimir Radchenko to the Council of National Security and Defence, and Leonid Danilovich Kuchma, apparently, can be nominated to virtually any state body.

But it will be later. Now welcome to the fan club of the Prosecutor General Viktor Shokin! Probably, he is the prosecutor general of our dream?