Fesenko: The conflict in Ukraine cannot be settled without attracting peacekeepers from neutral countries. The OSCE fails to cope with this mission 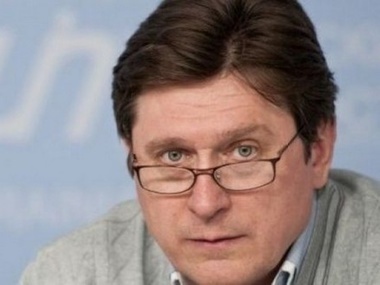 Fesenko: In case of cessation of hostilities, international mediators will seek for a new format of conflict freezing
Photo: inpress.ua

There is an attempt to force Ukraine and the West to make peace on Russia’s condition through a direct war, the political scientist and Head of the Penta Centre for Applied Political Studies Vladimir Fesenko.

Ideas of attracting peacekeepers from neutral states may arise in the attempts to freeze the conflict in the east of Ukraine once again. This opinion was expressed by the political scientist Vladimir Fesenko in his comment to the GORDON .

"In case of cessation of hostilities, international mediators will seek for a new format and new models of conflict freezing. This is the only possible way. I do not rule out that the idea of attracting peacekeepers may arise then. Otherwise, it will next to impossible to control ceasefire and ensure withdrawal of heavy weapons. Certainly, Russia’s involvement in this role is unacceptable for Ukraine, but this conflict cannot be settled without a third party. The OSCE fails to cope with this mission so another model must be found. It is better to form the peace-keeping contingent from among representatives of neutral non-NATO countries. For example, Finland and others. It will have to be discussed under whose aegis, the OSCE or the UNO, this contingent will act," the expert reported.

According to Fesenko, Russia is now trying to force Ukraine to make peace on Russia’s conditions through direct military actions.

"Russia is unfreezing rather than freezing the conflict now. We started interpreting the term "conflict freezing" very loosely. An attempt to freeze the conflict was made last year. The Minsk accords were an attempt to freeze the conflict. An advantage of this freezing is absence of war. It was the only option that suited everyone: us, Russia, separatists, even Europe. However, it turned out that the devil was in the details. It was because of these details such as demarcation line and status of these republics that a new conflict broke out. The conflict is being unfrozen now, there is an attempt to force Ukraine and the West to make concessions to Russia and to make peace on Russia’s conditions through a direct war," he said.

From the political scientist’s point of view, the war has become aggravated both in the battlefield and at the diplomatic front.

"The fact the First Channel showed new maps of Ukraine proves that Russia disregards international law and does not consider Ukraine to be a fully-fledged state. They say that they will not surrender these separatist republics. They will impose them on us, directly or indirectly, in such a way that we would support them and they would obey Moscow. The war has become aggravated, and not only in the battlefield. The war has also become aggravated at the diplomatic front and at the front of informational war," Fesenko claimed.

The expert considers that the former negotiations format has exhausted itself.

"It will be very difficult to return to the previous negotiations stream, and I do not rule out that a new format of negotiations must be found. Besides, declaration of DNR and LNR as terrorist organizations will further complicate the negotiations process for Ukraine. Considering this, the former Minsk format will hardly be an effective way. There are two options. Either the terrorists supported by Russia will advance to a certain point and play peace saying that they are ready to negotiate. Or we will manage to hold out and keep the separatists and Russian troops in their current  positions. Probably, Russia will then back off after a certain period of confrontation and active positional battles, mutual shelling, and attacks without essential changes of the frontline within 7 to 10 days," the political scientist stated.

Fesenko expressed an opinion that the resolution of the Verkhovna Rada on recognizing Russia as an aggressor is rather a political declaration aimed at the international community.

"The resolution of the Verkhovna Rada on recognizing Russia as an aggressor must be considered a political declaration that does not suggest any concrete administrative decisions so far. This document is intended for the outside world. It is aimed at the international community, our allies abroad, and international organizations. It is demonstration of the Ukrainian position. By this resolution, we are raising the alarm and giving a sign to the international community that we have been attacked by this aggressor. The risks of escalation of this aggression have increased sharply. If, for some reasons, the Ukrainian leaders took a rather flexible attitude to Russia before, there are direct accusations now because the risks of further escalation of the conflict have increased sharply. It is not about diplomatic courtesy, and things must be called by their proper names," Fesenko noted.