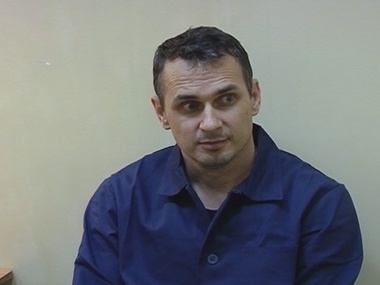 Film director Oleg Sentsov from Simferopol has been detained since May 2014
Photo: fsb.ru

Ukrainian Ministry of Foreign Affairs informed "Gordon" that during the past year, Russian law enforcers detained 11 Ukrainian citizens, who are now in jail in Moscow, Belgorod and Stavropolskii krai. According to diplomats, all Ukrainians were detained "on baseless charges" and are suspected of terrorism, murder and espionage.

As of January 2014 11 Ukrainian citizens are illegally detained in the Russian prisons: Nadezhda Savchenko, Oleg Sentsov, Alexander Kol'chenko, Alexei Cirnii, Gennadiy Afanasiev, Yuri Yatsenko, Sergei Litvinov, Nikolai Karpyuk, Stanislav Klich, Yuri Soloshenko and Valentin Vigovsky. This is stated in the reply of the Ministry of Foreign Affairs (MFA) of at the request by "Gordon" .

All of them, as stressed by the Office, are arrested "on baseless charges."

"The Russian side systematically violates the universal norms of international law and bilateral agreements in the field of human rights and fundamental freedoms, as well as arrangements for the release of all illegally detained people. As of today, on false charges the following people are illegally restrained: Savchenko, Sentsov, Kolchenko, Chirnii, Afanasiev, Yatsenko, Litvinov, Karpyuk, Klich, Soloshenko, Vygovskyy "- said in response the Ukrainian Foreign Ministry.

However, the ministry noted that for they currently check the information of the Russian human rights activists about the possible presence in Russian prisons and hospitals Ukrainian soldiers by sending requests to the Russian Foreign Ministry, the Federal Migration Service, Ministry of Health, the Federal Penitentiary Service and the Federal Security Service.

"As of today, measures that diplomatic and consular offices of in take to verify that information have no results," - the department reported.

All these 11 Ukrainian citizens were arrested during the past year, some of them - in , some - in , and then exported to the territory of the .

The representative of the central headquarters of the "right sector" Karpyuk Nikolay from Rivne was arrested allegedly on March 21, 2014 in Chernihiv region by Russian security services and from there he was taken to the . He is suspected of banditry and sending mercenaries to . He in jail in Yessentuki. Here also, in the Stravropolskii krai (presumably in Pyatigorsk) journalist Stanislav Klich from is detained. In August, he went to visit his girlfriend in the city of , but he never returned to . Relatives still do not know what he is suspected for.

There are six Ukrainians in jail "Lefortovo". Four of them are the residents of Simferopol Oleg Sentsov, Aleksey Chirnii, Aleksander Kolchenko and Gennady Afanasiev – are suspected of terrorism. According to investigators, "the terrorist group "Right Sector ", which allegedly was led by the filmmaker Sentsov, set fire to the offices of "Russian Community of Crimea" and "United Russia" in and prepared a few explosions. Cirnii and Afanasiev have already confessed (Afanasiev has been sentenced to seven years, but has not yet convoyed) Sentsov and Kolchenko still reject their guilt. They were arrested in May of the last year in the Crimea, and then taken to . After the annexation of the Crimea Russia automatically gave them their citizenship, but continues to insist that they are - citizens of . Another prisoner of "Leforovo" - 72-year-old resident of Poltava Yurii Soloshenko, is suspected of spying. Before retirement he was director of secret defense plant "Znamia" and then he continued to consult its new leadership. In August 2014 he went to for a meeting with a business partner, where he was arrested by the FSB. There is 31-year-old Valentin Vygovskyy from in the same detention center. According to the Ministry of Foreign Affairs, he is suspected in the illegal collection of information constituting a trade secret. Vygovskyy was detained in the in September 2014. According to his friends from , he went to , where for a document check was stopped by "self-defense". Seeing residence, they arrested Vygovskyy and after a while he was departed to , and from there to .

In prison №5 ("Five") in is held a collective farm worker from the Luhansk region Sergey Litvinov. In mid-August, he went to the region to the dentist, as the hospital wasn't working in his native village. He was arrested in late August in the region and then moved to . Russian investigative authorities stated that the Ukrainian fought in battalion "Dnepr". He is suspected of murder and the use of prohibited means and methods of warfare. Litvinov's relatives in the comment to "Gordon" said that he did not serve in any battalion and never participated in the fighting.

Ukrainian officer, MP from the "Batkivshina" Nadezhda Savchenko from is in jail-6 ("Printers"). Savchenko fought in the Donbas as part of the volunteer battalion "Aydar", in June of 2014 in Luhansk region was captured by the rebels and was secretly, against her will, exported to . There she was accused of involvement in the deaths of two Russian journalists and of the crossing the border illegally. Savchenko denies the charges. According to lawyers of the pilot, they have evidences that the Russian media workers have already died after Savchenko was taken prisoner. In protest against her arrest she started a hunger strike from December 15, 2014.

24-year-old student from Lviv Yurii Yatsenko with a friend were arrested on May 6, 2014 in the city of in region on charges of violating the rules of entry into the . Later, the friend was released, but against Yatsenko they opened a criminal case concerning the illegal purchase and smuggling of explosives. According to investigators, in November 2013, during the last visit from Lviv to Russia, he allegedly left his bag to the taxi driver, in which almost a year later were found 40 grams of gunpowder. Now Yatsenko is in jail.

At least three of the arrested Ukrainians - Sentsov, Litvinov and Yatsenko - said that employees of the Russian forces used violence to them, demanding the necessary corollary evidence. Ukrainian diplomats were not allowed to visit some of the detainees for months.

For more details about the arrested Ukrainians in , see the special project of "Gordon" "Ukrainian hostages of Putin by name."