Grach: Yanukovych's accomplices have power in the Crimea, it is necessary to carry out lustration following Kiev’s example here 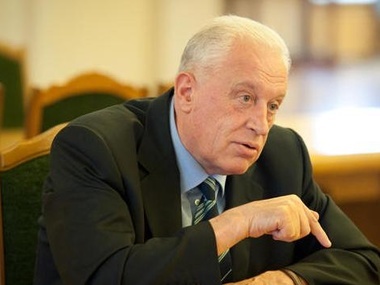 The former speaker of the parliament of the Autonomous Republic of Crimea, and now Head of the Crimean Office of Communists of Russia party Leonid Grach shared with GORDON his opinion about how the Ukrainian-Russian relations will develop, why the Crimea needs lustration and why the peninsula should be provided the status of a special territory.

– Leonid Ivanovich, do you think that today's meeting of Putin and Poroshenko in Milan will bring peace?

– Most regrettably, no. The trouble will grow and continue. It has been known for a very long time already that there will be such a scenario. And in spite of the fact that Russia rather actively tries to balance, I would tell, to leave the battlefield, and it has already received "penal points", or, in other words sanctions, and in spite of the fact that Ukraine is in an ideological, political, geopolitical, social and economic default, it will continue to rattle the saber which it does not have. Yatsenyuk will be pompously driving along the wall as a fop, nobody knows what for. Nobody will even give a hint that the real peace is necessary before October 26, and after October 26, those who will come to the parliament, will start aggravating this geopolitical hysteria even more. Especially, as they will do their best to prevent elections that are planned for November 9 in two republics in Donbass. The elections in Donbass will become a new round of aggravation and opposition, therefore, we can only dream of rest, to our huge regret. And woe to our people that is guilty without guilt and that suffers the most.

– But you will not deny Russia’s fault in this conflict in Ukraine, will you?

If we take it by and large, everybody is trying to evade from the main reason today. For this, we should remember how Yeltsin declared the state sovereignty in 1990. Russia agreed to destroy the Soviet Union, and then it was joined by Kravchuk and Shushkevich in Bialowieza Forest already (Chairman of the Supreme Council of Belarus Stanislav Shushkevich. – GORDON). Here are the three persons who followed this way. But does not Russia have to take responsibility for all those results which are today after 20 years? In fact, under Yeltsin’s regime, he gave Ukraine whatever it wanted. There was no position towards the creation of the CIS as declared by the successor of the USSR. And was not it unclear, when Leonid Danilovich Kuchma openly "fornicated" when he was elected for the second term? He played GUAM (Interstate Association of Georgia, Ukraine, Azerbaijan and Moldova. – GORDON), played a multi-vector development, etc. And tell me, was not there a signal that neo-fascism starts reviving seriously at the time of Yushchenko? And what was Russia doing? Russia was saying that they would work with any leader. Well, go ahead and work. Did not Russia have enough in 2004 when Putin congratulated Yanukovych on his appointment, and then a third round was made up? Was not it clear that Yanukovych will end these 20 years with a bloody slaughter? I said that Yanukovych would have the destiny of Gaddafi, for instance. Another thing is that he was hidden by Russia after he managed to escape. When Yanukovych was creating the corruption vertical when there was robbery all over, when people saw that he also "fornicated" with Europe though he did not need it. And the Russian government said, "Well, take a couple of billions dollars, we will give more later". Why and what for? That is how he wound up this tragedy, and nobody knows when it will come to an end. I mean Donbass and opposition among people. We perfectly understand that there is a rather serious opposition between, say, layers of population for anti-Russian grounds. Therefore, we must think and analyze what will happen in the future. If you want to continue hiding Yanukovych and all his accomplices who stole everything – it is one approach. There will be another reaction to Ukraine and to the attitude to Russia. And what we have to do today is to make peace, rest and restoration of friendship between the people of Ukraine and Russia a cornerstone of their relations. Any price should be paid for it.

– I know that you consider that, actually, Yanukovych has not gone anywhere, anyway, as you say, his people continue to remain in power in the Crimea. Has the Crimea remained Ukrainian in this respect?

– The leaders of the Crimea that are now considered representatives of Russia, such as Konstantinov and Aksenov, are former Yanukovych’s accomplices. And Dzharty, too, by the way. Dzharty arranged it that some weeks prior to the elections to the Verkhovna Rada in 2012 Aksenov had an opportunity to quickly re-register the Russian Unity party. And Yanukovych's vassal, Prime-Minister Mogilev was acting here then. Burlakov was acting here for the last five years - he is a very mean person. And today, they have the Russian citizenship, one of them lives in a mansion near Simferopol, I mean Burlakov. And the other one, Mogilev, is having a rest in Koktebel 100 meters away from Voloshin's cottage. So what is going on here? Or, say, if you confiscate lands and so on, do you take it away from everybody, or do you do it selectively. Why do not you take anything away from Akhmetov? Why do not you take anything away from Yanukovych? Why does nobody touch Klyuev brothers’ fertile lands? These rascals are to blame for extreme mess in the public opinion in Ukraine, and the Crimean situation is relayed on the Russian one. If there is an abscess, a wound, it will turn into gangrene. And the Crimean gangrene will be a sort of geopolitical Ebola virus for the Russian-Ukrainian relations. We must dot all i’s here so that everybody would live in a lawful way and without international conflicts. It is necessary to clear everything out, to follow Kiev’s example, to carry out lustration in the Crimea. If you did not want to do it before the elections, do it now. It is a real political and economic banditry. The most important thing is that ‘cool guys’ came, and they are now filling authorities, first of all Council of Ministers, the State Council, etc. They were taught how to steal and deceive in gangster bands. They are not able to create.

– According to the latest statements of some Russian oppositionists, the Crimea will not return to the Ukrainian structure. Others, on the contrary, predict that it will return to Ukraine. And what do you think – will the Crimea remain Russian forever?

– This terrible problem "Whose is the Crimea?" can be eliminated by establishing good relations between Russia and Ukraine rather than with the statements of Khodorkovsky, Navalny and the likes. Only this can restore a certain balance. What can it be from the political point of view? This question is under seven seals today. But the Crimea should be transformed into an open socioeconomic area with a special status. So that both Russians and Ukrainians could feel equally safe and calm here. That is what we need to do today.

– So you support its extraterritoriality, don’t you?

– Extraterritoriality already exists. And another point is how to use this territory… I would follow the suit of Hong Kong the way Beijing made it. I would provide an opportunity for the local economy to attract everybody. Eliminate all these foolish things on borders. Lift embargo so that the goods could be where they need to be and where they can be marketed. And we are sitting like dogs in the manger and barking at each other.