Head of Samopomich faction Berezyuk: There will never be an ideal program of the Cabinet of Ministers, but we should learn to work together 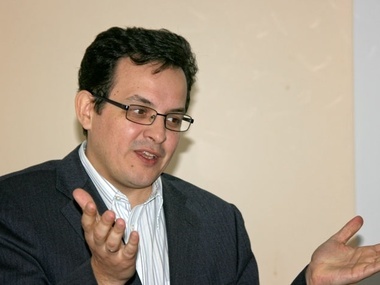 Berezyuk regards adoption of the program of the Cabinet of Ministers a symbolic act
Photo: Andrey Polikovsky / iPress.ua

The head of the Samopomich faction in the Verkhovna Rada Oleg Berezyuk believes that the Cabinet of Ministers includes both modern officials and civil servants who will evade responsibility with the help of manipulations.

Oleg Berezyuk, the Head of the Samopomich faction in the Verkhovna Rada, thinks that the action program of the Cabinet of Ministers should be in strict conformity with the coalition agreement underlying this government. He stated it in his comment for the GORDON edition.

"Another observation is that the presentation program differed from the program handed out as a document, it is not the European way. We will learn. The majority of the government are good, pro-European, efficient, and modern officials with absolutely no experience of bureaucratic governmental work. However, there are also quite a number of people who know very well how to manipulate with documents and evade responsibility. We should find a point between these two poles to make a good start and develop. I do not think that there will ever be an ideal governmental program, but we should learn to work together," the people’s deputy noted.

Moroz: Lustration anti-corruption laws will solve nothing until the state structure is changed G
8 october, 2014 22.01 |comments: