Head of the Committee of Soldiers' Mothers of Russia: Russian moms don't go neither to Ukraine nor to Rostov to take the bodies of dead sons 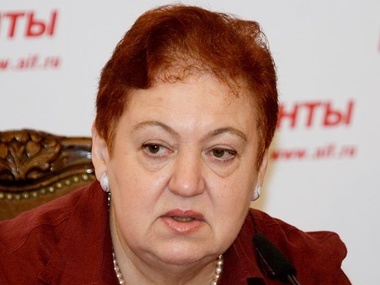 During the wars in Afghanistan, Chechnya and Georgia, Russian mothers demanded to return their sons-soldiers, but in the war with Ukraine natives of soldiers behave passively, said in an interview with "GORDON" the head of the Union of Committees of Soldiers' Mothers of Russia Valentina Melnikova.

Almost a year ago, went to war against . The result of "restoration of historical justice" and building a "Russian world" in Donbass - over five thousand of dead, 12,000 wounded and several million internally displaced people (UN data). There is no official information on casualties on the Russian side, but the pictures of nameless graves of soldiers with date death of 2014 regularly appear on the Internet.

According to human rights activist Yelena Vasilyeva, in eastern were killed and went missing more than five thousand Russian soldiers. The most striking thing about this story - the silence of relatives and friends of soldiers and officers of the Russian Federation, who were killed and maimed in the war in Donbass. In an interview with "GORDON" the head of the Union of Committees of Soldiers' Mothers of Russia Valentina Melnikova said that in 26 years of her job, has never faced such a reaction of parents.

When I ask the parents of recruits: "Do you know that is waging war, aren't you afraid for your children?" They say, "Oh, no one was sent to Donbass"

- On February 5, President Vladimir Putin signed a decree "On the conscription of citizens of the Russian Federation, in reserve, for military training in 2015". What does this mean in war conditions with Ukraine?

- There is nothing extraordinary, this nonsense constantly repeats in . Due to our law, military service citizens who are in the reserve are called out for training no more frequently than once every three years. Trainings last up to two months.

Usually with the beginning of military training those who received summons begin to call our committee. They say they have a wife-child-work, what to do? No one is willing to go fighting. We objectively explain how to deal with such cases. But after the beginning of 2015 we haven't received such complaints.

- It is true that recruits from Moscow and St. Petersburg are not sent to fight in Donbass. One thing is to send to the war boys from the province and quite another – from two of the richest cities in Russia?

- Last year, when was already at war with , there were two military conscriptions – in spring and autumn. In the autumn of 2014 were compellations that spring callup will be sent to . Three months after the beginning of the service conscripts were forced to sign "so-called-kontrakt" - and move to the region "for training."

What prevented the parents to come to us and save - by law! - their own children from war?  Nothing! When I asked moms and dads: "You know that is waging war, aren't you afraid for your children?" They say, "Oh, no one is sent to Donbass." I'm just shocked from such parents, though I work for the Committee of Soldiers' Mothers for 26 years! In November 2014 the information about the new graves on the northern graveyard of Rostov-na-Danu was approved. One of the social media users went to see the graveyard and made a photo of graveyards with the sign "U.M" (unknown man). Except for the unknown graves there were also with names and the dates of deaths of the period since june till september 2014. Photo: Misanthropic Division / "Vkontakte"
Current events in  - it is the ninth war of , but there has never been such parent's attitude towards their military sons

– A strange, passive position of parents, whose children under the guise of doctrines were sent to be at war, has just started or it was the same in the 1990th?

– It was different till the events in . In the 2008 when war with began, the Russian people were worried. During the Chechen wars every day in our reception the line of 200 people was, phones were broken off from calls of soldiers' mothers. Certainly, now everyone has mobile, soldiers can regularly contact a family, but still...

In since 2007 till 2012 Anatoly Serdyukov was the Minister of Defence, during his regime the criminal crimes in troops almost completely disappeared: there were neither fights, nor extortion or tortures. Till that time all the country was afraid, people shouted: "Do not send our children to army, they are beaten there". But when mockeries in army stopped, the people relaxed.

– There were fights, but they were more likely separate cases, but not systematic. Tortures, humiliations or beatings which were "blessed" by officers, disappeared. The quantity of suicides in army also decreased though before that almost 400–500 suicides appeared every year.

– Even in the Russian mass media the news about the military personnel of the who was lost or crippled in "DNR" and "LNR" began to appear, but the people "are still relaxed"?

– I can't understand anything either! In August 2014 the relatives of recruits called us and asked: "The son called, he told that they were sent to the region, and from there – to , what should we do?". "I told them immediately to go there and take away their children!". In there is a commander of the district, there is a prosecutor of the district, it is necessary to knock their offices and to demand. Nobody did that. Neither then, nor now.

– I have no clue! All the time I communicate with these mummies, our news feed in a social network "VKontakte" is used up by these crazy ones. They complain, but do not take concrete steps, they do not send inquiries to our committee. If to consider present events in is already the ninth war of , but there has never been such parents' attitude towards their military sons. Fortunately, the part of children who were on Donbass, escaped and returned, and started thinking: they were tried to be sent again "to trainings", but some told: We "Do not want".

On the First Chechen war the bodies of the dead were burned in factory furnaces. I think, today the Russian authorities also try to hide real losses of their army in

– In interview to "GORDON" the uncle of the Russian paratrooper who lost his leg in war on Donbass declared : "Relatives of the dead are paid by five million rubles, and the wounded – three million therefore they keep silent".

– They are obliged to pay them this money. Five million are obligatory on-time payment, insurance money. That's what we've achieved for many years of pressure upon the power. Even if relatives will not be silent, and will tell everything personally to Barack Obama – the Russian power all the same will pay them these means. These are legal money.

– How relatives of the Russian soldiers who were lost in "DNR" and "LNR" take away their bodies?

– We are not even sure that the killed people in principle are taken away. I do not know about now, but in August, 2014 the bodies were taken away not at once.

– The head of Security service of Ukraine Valentin Nalivaychenko claims that for concealment of the facts of participation of military of the Russian Federation in military operations on Donbass bodies of the lost Russians were burnt in mobile crematoriums. According to his information, from January 20 to January 23 according to the indication of the General Staff of Armed forces of the Russian Federation seven mobile crematoriums were imported into "DNR" and "LNR", "the usual norm – to burn eight-ten people daily. At least".

– At the beginning of the first Chechen war the federal authorities burned bodies of the dead. Burned at limy plant where there were high-temperature furnaces. These facts are confirmed; even human rights activists brought bones. The authorities tried to hide a death toll. I think, today the Russian authorities also try to hide real losses of the army in .

Among the armed separatists 80% are Russians, 20% – local people

– Recently photos of a cemetery near appeared in the Internet where, according to users of social networks, the Russian soldiers who were lost on Donbass are buried. Tens anonymous burials are designated by plates: "Surgical waste".

– We carefully filter any information, especially from the Internet. I ceased to react to photos with a grave, a cross and the plate of "soldiers No.". We rigidly stick to the line – we investigate only concrete cases on specific people. Families appeal to us to find, then we start looking for. To react to each photo, video or a post on the Internet is impossible. Photos of cemetery near where, according to users of social networks, the Russian soldiers who were lost on Donbass are buried. Tens anonymous burials are designated by plates "Surgical waste".Photo: informator.su

– There is a hope that Russians who did some fighting, returned and refused to go the second time to Donbass, really understood: plots of "Pervyi Kanal" about "chasteners and fascists" – lie?

– There is a small group that came back, but they are in shock. I think they will accustom a little and will come to us because they are offended: they were promised the ranks of heroes, certificates of the participant of military operations, and as a result nobody even returned them a military uniform.

– According to the Ukrainian investigation, in the east of there are about nine thousand of Russian military. What data do you have?

– Such data are not provided in . It is difficult to understand, how many citizens are at war from the , and how many – so-called "rebels". My personal intuitive assessment: among the armed separatists of 80% are Russians, 20% – local.

– What would you like to say to mothers of the Ukrainian soldiers who are at war now on Donbass?

– Be sure, not all Russians think the same as Putin and his cannibals do. We consider war with criminal, – an aggressor, the – annexed. We fought and fight, but it will be unfortunately incredibly difficult to stop this strange, heavy, terrible war.