Historian Solonin: It would be natural if someone was caught with a Yarosh’s business card after Nemtsov’s murder

Despite the fact that many people think that wrong people were detained on the charge of Boris Nemtsov’s murder, it is likely that the arrested Chechens were involved in the crime, the Russian historian and publicist Mark Solonin believes. 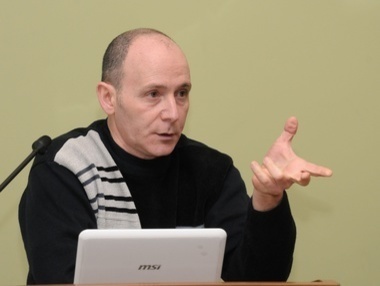 Solonin: Presenting the master with the enemy's head on a golden plate is an act that is quite understandable to Kadyrov
Photo: samtime63.ru

The Russian authorities had many options of who killed Boris Nemtsov, the historian and publicist Mark Solonin said in the comment to the GORDON .

"There was a survey at the Echo of Moscow radio yesterday: "Do you believe that the real accomplices of the murder were arrested or not?" Three quarters do not believe, while only a quarter believes it. In this case, my opinion matches the opinion of the minority, I do believe that the arrested Chechens were involved in the murder itself. This belief is based on the simple logical presumption that if the authorities had wanted to arrested and accuse innocent people of the murder, they had a very rich choice. First of all, someone with Dmitry Yarosh’s business card might have been caught – it is the most natural way; some of Russian oppositionists could have been caught, and it would have called provocation aimed against Putin, or fighting within the opposition for the distribution of American grants," he said.

According to Solonin, the arrested Chechens are likely to have been involved in the crime.

"With all my critical attitude towards the Russian authorities, I would not label every their action as a lie, and not everyone they catch is an innocent lamb. Most likely, the arrested Chechens are involved in the execution of the murder. Kadyrov’s reaction, who dared publicly disagree with his suzerain’s actions yesterday, and Kadyrov has been insistently, publicly and repeatedly explained over the last two years that his relationship with Putin is not one between an official of the Russian Federation and the chief official of the Russian Federation, but rather one between a feudal lord and a suzerain – thus, Kadyrov's reaction is very interesting. He dared express disapproval and doubts concerning the guilt of the accused, he expressed deep regret that one of the accused was either blown up by a grenade or killed during the arrest. In my opinion, this indicates that the investigation is not working at random, and the people detained are really involved in the case," Solonin reported.

The historian believes that this murder fits the outlook of Kadyrov as Putin's loyal supporter.

"Organization of the murder of the prominent Russian oppositionist by Kadyrov or people around him fits quite logically with the role that Kadyrov has been trying to assign to himself for the recent years, on the initiative or at his own decision. It is the role of the most dedicated soldier who is ready to kill anyone at the master's order. It is how Kadyrov positioned himself so strongly, arranging some fantastic events like parades of his men during which they took an oath of personal loyalty to Putin. He described himself as " Putin’s most loyal foot soldier". Within the framework of these feudal concepts somewhere between tribalism and feudalism, it is very good, clear, and traditional behavior to bring the enemy’s head to the master on a golden plate," he stated.

Ramzan Kadyrov’s way of thinking is at the level of early feudal system, Solonin thinks.

"The date of murder February 27 is not accidental – according to the decree of the President of Russia, this day is the Day of Special Forces, as it is the day when the armed ‘little green men’ seized the building of the Supreme Council of the Crimea in Simferopol. To make a present to the master on such a day would be quite logical for a person whose way of thinking is within the framework of early feudal ideas. It is quite a plausible version. It can be assumed within the rampant conspiracy fantasy that there were evil people (I have no idea what their names are and where they are) who prompted the young and expressive Ramzan Kadyrov that it was necessary to present the master with such a gift. Or they provoked the young and the expressive, for example, by telling hima joke allegedly told by Nemtsov, or something of the kind," the historian believes.

According to Solonin, the conflict between Putin and Kadyrov weakens the Russian president.

"What do we have now? A public conflict between Putin and Kadyrov, which runs contrary to Putin’s interests because Kadyrov and his great infantry that take great pleasure in severing heads of Russian soldiers is a very powerful tool, it is a very powerful force resource that Putin may make use of in a critical situation. Again, because of the feudal relations between the Chechen satrap and the Great White Tsar, this power resource was very reliable because it could hardly be outbid. Therefore, misunderstanding between Putin and Kadyrov, let alone something more serious, weakens Putin. Trust is a delicate thing. It is earned for years and lost in a minute. No matter what Putin will do in the following days – either publicly reconcile with Ramzan Ahmadovich or, on the contrary, increase the number of detainees in Grozny by another person – there will not be the former idyll with the "most loyal foot soldier", Solonin summed up.