Human rights activist about Davydova's crime of high treason: On what legal grounds FSB bugged the Embassy of Ukraine? 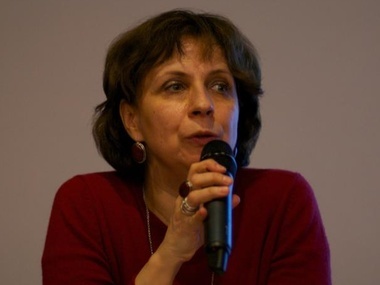 Zoya Svetova: During the house-search the diary was seized, where allegedly were records of Svetlana Davydova's negative attitude towards the war in Ukraine and the possible transfer of troops from the territory of Russia
Photo: Elena Servettaz / Fasebook

Svetlana Davydova, the mother of many children is being kept in Lefortovo prison in Moscow for the second consecutive week. She was accused of treason in favor of Ukraine. In an interview with "Gordon" Russian human rights activist Zoe Svetova, who visited Davydova in the prison, told how the Russian authorities tried to get from the imprisoned the "necessary" evidence and "to let down the case quietly."

Early in the morning of January 21, 2015 in an apartment on the outskirts of the city of Vyazma (Smolensk region, Russia) the doorbell rang. Local police officer came with a complaint from neighbors about noise. The door was opened by Anatoly Gorlov – the head of the family, where seven children grow (the youngest is only 2.5 months). Instead of the district police officer, the men in black with guns broke into the apartment. They turned out to be officers of the Federal Security Service of Russia (FSB), who came to arrest his wife Svetlana Gorlova on suspicion of treason in favor of Ukraine. The next day the court chose a pre-trial restriction in the form of two months remand in custody in detention centers of "Lefortovo" in Moscow.

According to the FSB, in April 2014 a 37-year-old housewife Svetlana Davydova called the Embassy of Ukraine and said that the soldiers of the military unit 48886 (which can be seen from the windows of her apartment) went on a business trip to Donetsk. Arrest of the mother of many children caused a storm of indignation in the Russian social networks, the Internet began collecting signatures on a petition "to change the measure of restraint for resident of the town of Vyazma, mother of seven children Svetlana Davydova." One of the first who visited detained woman in jail, was a human rights activist, a member of the Public Oversight Commission of the Russian Federation and the mother of famous Russian journalists Philip (magazine The New Times), Timothy (magazine Forbes) and Tikhon Dzyadko (TV channel "Rain") Zoya Svetova.

After meeting with Davydova in "Lefortovo" Svetova wrote an article where she showed a dialogue with the detainee: "We can not talk about the criminal case, or about her beliefs - only about the conditions of detention and abuse of her rights. I asked:" Did they pressure you? Did they beat you? ".

- No, really, they are smart people.

- Do you still have breast milk?

"Gordon" phoned Zoe Svetova to find out the fate of the mother of a big family, accused by the authorities of the Russian Federation in treason in favor of Ukraine. 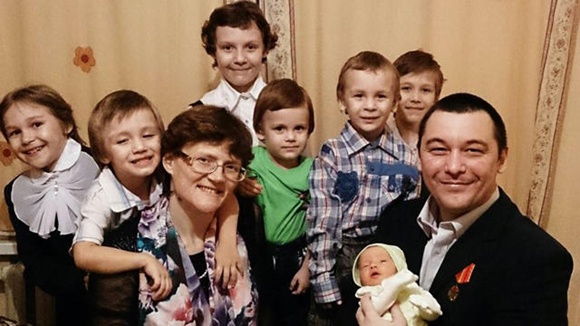 Svetlana Davydova and Anatoly Gorlov are raising seven children (four joint and three from the first Anatoly's marriage) - 14-year-old Olga, seven-year-old Sveta and Natasha, five-year Arthur and Spartacus, the three-year old Edward. The youngest girl Cassandra is only 2.5 months. Photo: Anatoly Gorlov / Facebook
The changes were made in criminal article about "treason". Now absolutely any citizen of the Russian Federation can be brought to justice - a journalist, a housewife or a janitor

- Was there anyone else in Russia arrested for treason since the beginning of the Ukrainian-Russian conflict, except Svetlana Davydova?

- I don't know. The 73-year-old director of defense plant "Znamia" Yuri Soloshenko is also in Lefortovo prison, he seems to be accused of spying for Ukraine. The same case has 32-year-old citizen of Ukraine Valentin Vygovskyy. There are practically no information at all about his case. Both Soloshenko and Vygovskoy has lawyers provided by the FSB.

But Davydova is accused not in spying but in the crime of high treason. Note, Svetlana, according to the investigation, called the Ukrainian embassy almost a year ago - in April 2014, but the case was only opened in January 2015. So the mother of many children was especially given the opportunity to give a birth to a baby, to begin to feed it, and only then was arrested to be forced to give "necessary" evidence.

- How long is Svetlana facing?

- Article 275 of the Criminal Code "High Treason" provides from 12 to 20 years. Davydova allegedly called the Embassy of Ukraine and said that Russian troops were sent to your state.

The changes were made in 2012 in the law on "High Treason". Now, this article can bring to the justice absolutely any citizen of the Russian Federation - a journalist, a housewife, janitor, even if they do not have access to state secrets, but when communicating with foreigners, said to them, for example, that Ukraine can fight Russian soldiers.

- The Kremlin clearly states: "There are no Russian military in Ukraine." So logically, Davydova with her call simply misinformed the foreign embassy. So where is the treason?

- For me it is also strange. Immediately after the detention Svetlana was provided with a free lawyer from the state Stebenev Andrey. He suddenly said that the case was grounded on something. People call me and say that it is a travesty of justice. "No. There is information, there are facts, it is reasonable."

- Why lawyer Stebenev has not filed an appeal to change the measure of restraint from detention in jail to house arrest or on bail, especially since Davydova has a small baby?

- Stebenev, according to what was said in the media, was not going to appeal. He needed Svetlana to sit quietly in jail and under the pressure of the investigation to testify. After that the case would be quietly handed over to the court and rendered a verdict. The plan has failed because Svetlana's husband Anatoly Gorlov wrote about the arrest of his wife in Facebook, made a fuss. The news immediately was picked up by journalists, human rights activists, bloggers. If Anatoly did not do that, no one would ever hear about the case against the mother of many children. Svetlana's husband has already said he does not trust Stebenev, and concluded an agreement with other attorneys who should intervene in the case today, on February 2.

- What else did you find suspicious in the actions of attorney granted by the state?

- Stebenev did not call Svetlana's husband and did not tell him about the trial, where the measure of the intersection of two months of detention in jail was chosen, plus he did not provide the birth certificates of children, which could mitigate the judgment.

I repeat, they wanted to make everything silently: to put behind the bars, to extract confessions, maybe to show on television accused in treason in favor of Ukraine and begging for mercy strange mother of many children, in private, without the press, to entertain the case in court and to bring in guilty.

In the Russian courts acquittals make up less than one percent. We even call suspended sentence as "Russian justification"

- Did Davydova tell you why she decided to call the Ukrainian embassy, and not, for example, to write about her suspicions in social networks?

- I think it was an emotional rush of woman and mother. Svetlana was afraid to publish this information on the Internet. She did not think that the phones of Ukrainian Embassy are wiretapped by Russian special services. None of the common people knew about that. I cannot believe that the Russian court could authorize the wiretapping of the Ukrainian embassy in ! Without the permission of the court to wiretap the phone conversations is impossible.

During the investigation search they found a diary in which allegedly there was recording of Svetlana Davydova's negative attitude towards the war in and the possible transfer of troops from the . I think even if the Ukrainian embassy diplomats received such a call they would hardly perceive it seriously.

- On your Facebook page you wrote: "Svetlana is about to be released, but they can arrest her husband." What is the basis of your concerns?

- Mr. Gorlov impeded the investigation, made a fuss in social networks and the media, defending his wife. Thanks to him, people started a campaign to collect signatures to change the measure of restraint to house arrest. They have already collected more than 25,000 signatures. And Anatoly was pressured, intimidated, that they will take away his children. But even authorized for Children's Rights Pavel Astakhov, stood up for the detainee's family and said that children will not be taken away.

- How should Ukrainian side act to help Davydova, to be exact - not to hurt her?

- This question should be addressed to the new lawyers of Svetlana. But there is an important issue of concern to all: on what legal grounds FSB bugged the Ukrainian Embassy in ? How the Ministry of Foreign Affairs of Ukraine reacts to the fact that calls are monitored by special services of the ?

- What will be the end of Davydova's case?

- I hope that in the near future Svetlana's measure of restraint will be changed on house arrest or on bail, and then the case will be dismissed for the lack of evidence. This will be the correct way out of the situation.